Farm Hunters: Would You Buy or Rent This Property? Part One

Not for me - sorry! Our own house/farm search is continuing apace, and I hope to have an update soon. In the meantime, I present to you this quandary.

I have a cousin who has an extraordinary head for business. He's been pursuing various lines of moneymaking since we were kids. He works incredibly hard at his very lucrative day job, and in his spare time is always looking for investments. Lately, he's been doing a lot of real estate. I think he's up to four or five rental properties. He does the work himself to make them nice and he's a really thorough landlord.

Last week, he called me for my opinion on a property he's looking at purchasing - for himself, this time. It's a foreclosure in a semi-rural area but still quite close to the Boston metropolitan area. The house is huge and gorgeous, but what he called me for my opinion on is the horse potential of the property. He has zero interest in horses himself - well, at this point in his life he does, anyway. When we were kids we totally had a plan to adopt a black mustang stallion named Midnight and keep it behind my house and have adventures together. But I digress.

What he was wondering was whether it would make sense to lease out the barn and pasture to someone who wanted to keep their own horses there. So, here's what I'll do: I'll set up the situation as he described it to me, and as I've researched it on my own, and I'll ask you what you would choose. Tomorrow, I'll write up what I advised him. 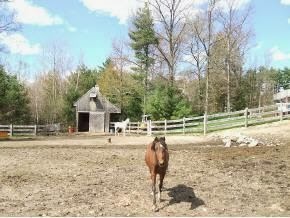 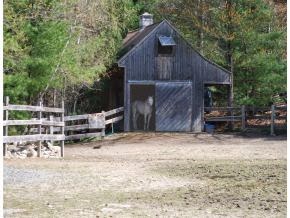 The basics: The entire property, house + barn + pasture, is 1.32 acres. Approximately .75 acres of that is fenced with high-quality board fencing that has been well-maintained. The 2 stall barn (visible in this picture) was built in 2008 and has an overhang, hay loft, tack/grain room area. There is electricity and running cold water in the barn, which opens to the pasture. The previous owners kept two horses on the property.

The surroundings: The lot is on a slight incline, but nothing too dramatic. Most of the pasture is flattish. Soil quality appears to be pretty decent, with good drainage. The lot is a corner one on a larger, but not too busy, road. The town itself is VERY horsey; one of the better tack shops for 50 miles is within 10 minutes, and there are multiple state parks and conservation areas with extensive trail systems in the town itself, with quite a bit more accessible just a little further away.

There is significant land across the street, and it connects to the trail systems of one of the largest parks. However, there is an open question of whether there are any right-of-way paths through that land, or whether it is private and posted against trespassing.

So, with all of that in mind: would you lease the barn + pasture for your own horses, for self-care board? Would you buy this property someday as a horse owner? What would you recommend he do if he were to buy this property?
at 10:00 AM