When last we left the back bedroom, a whole army of friends had stripped all of the wallpaper.

They were enthusiastic but not very detail-oriented, so there was still a fair bit to do.

Chiefly, I had to remove the little snagged bits of wallpaper left, and wash off the wallpaper glue. This worked much more easily than it had in any other room. I filled a bottle with half vinegar, half water, and a squirt or two of Dawn dish soap. I sprayed that on the wall, let it sit for a few minutes, and then scrubbed with a sponge dipped in hot water. Rinse the sponge, so on and so forth. It took a few days, doing one wall a day after work, but it wasn't hard work. I could have easily done it in a day if I had time. 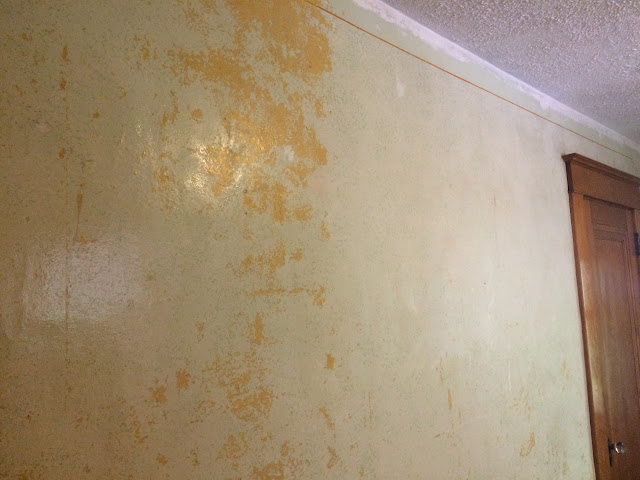 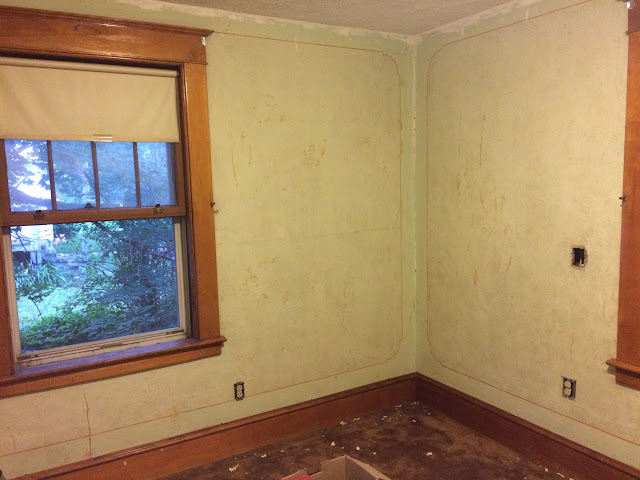 Next: patching. I get kind of fanatical about patching, and this room in particular had a loooooot of little patching to do. You can see one of the holes in the photo above, leftover from the electrical work. So this took a few more days, because a layer of patching has to dry up to 24 hours before you do the next layer. 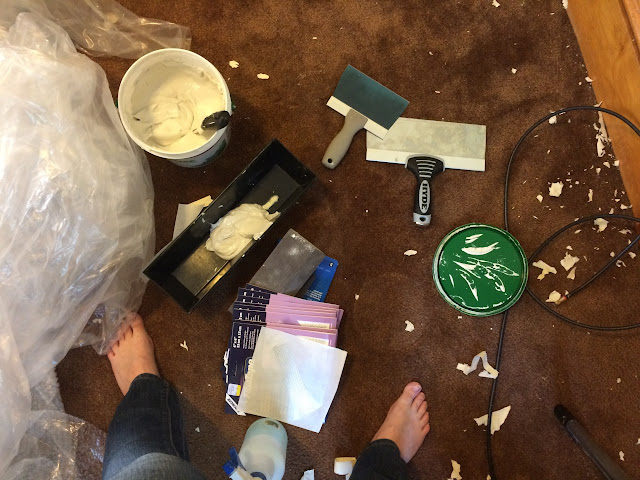 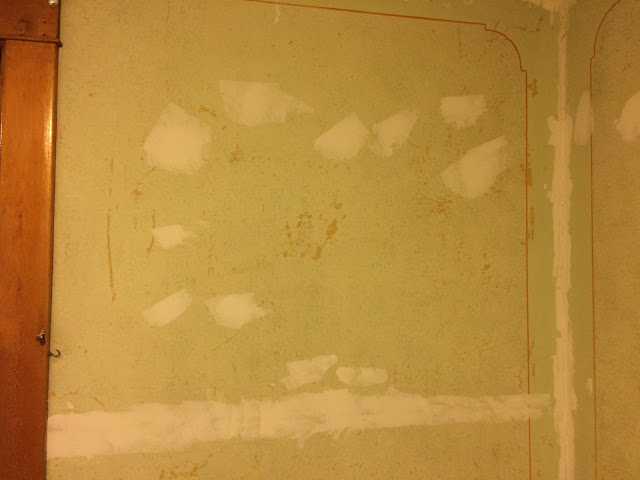 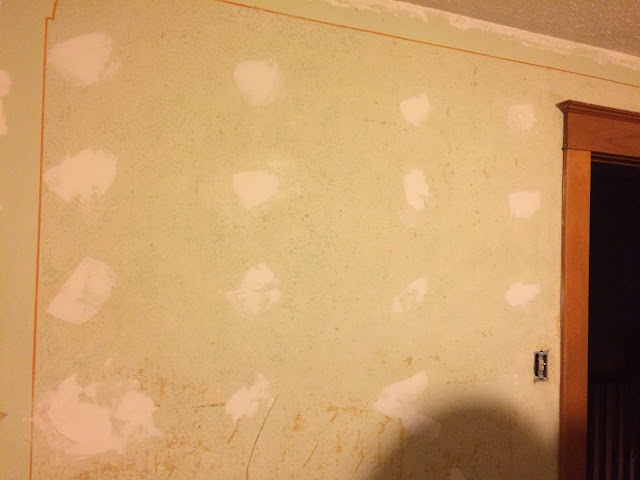 Next up: priming. Every wall gets primed with oil-based Kilz primer so that I can be neurotically safe and sure about any wallpaper residue. 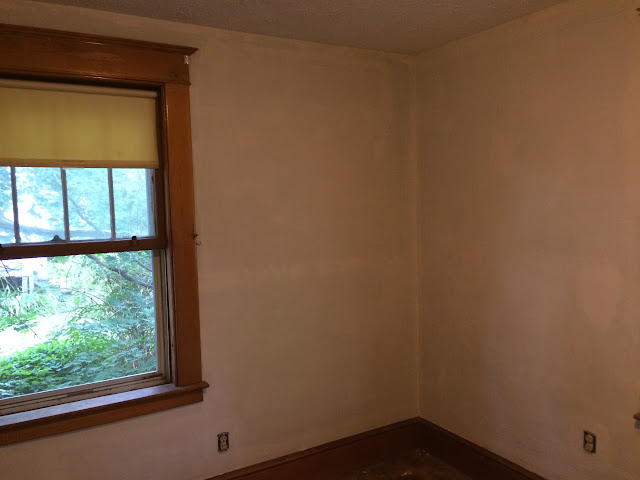 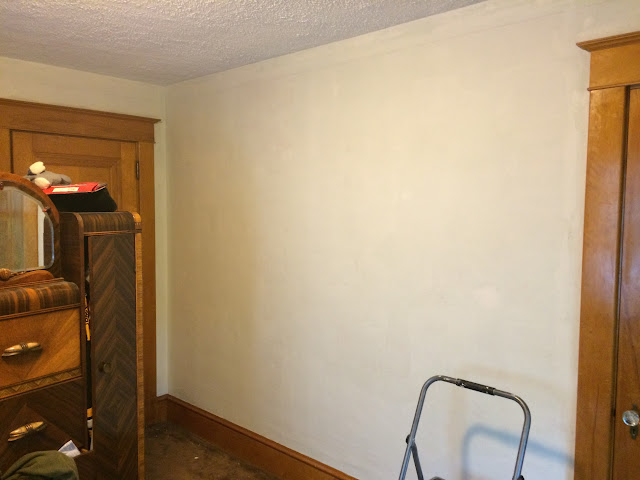 Then, color: Sherwin Williams "Sand Dollar" which does not come through in photos but is essentially a warm beige. I kind of wish it had been a shade or two darker, but this is the darkest room in the house, so - it's probably good to stay light. 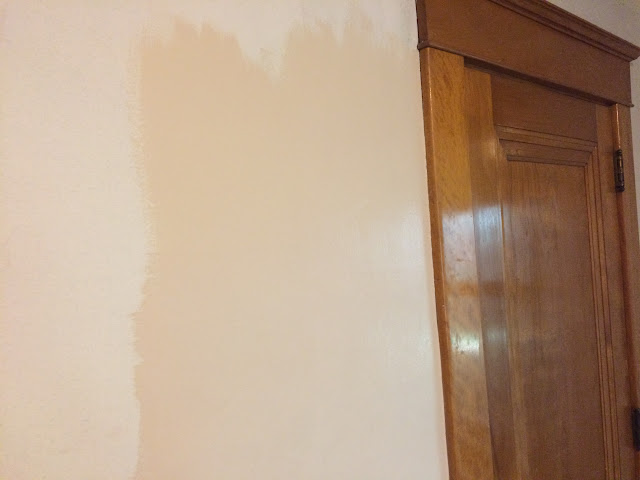 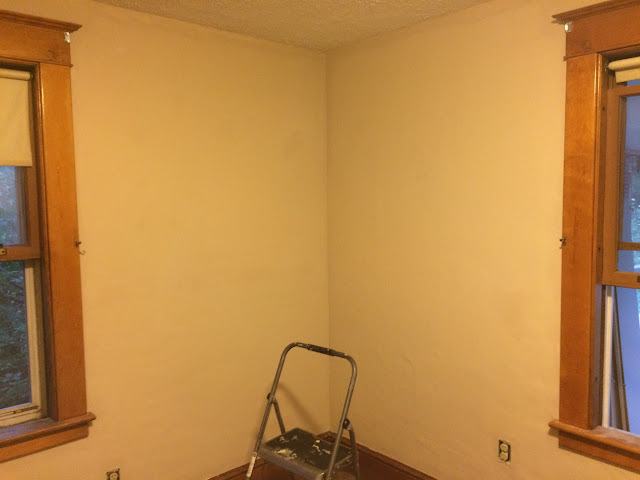 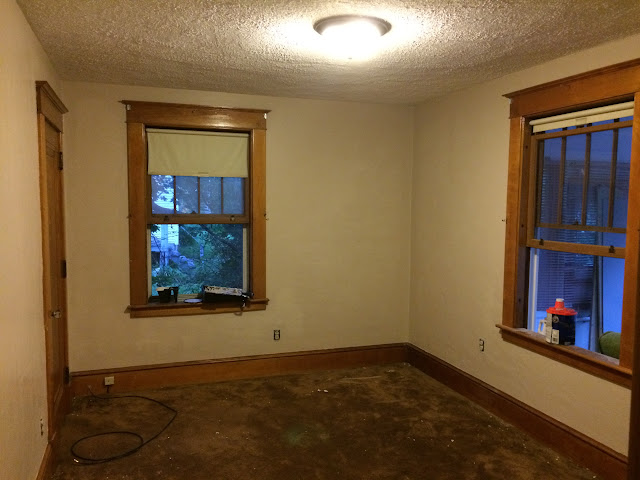 The last phase was supposed to be pulling up the carpet, but, well... 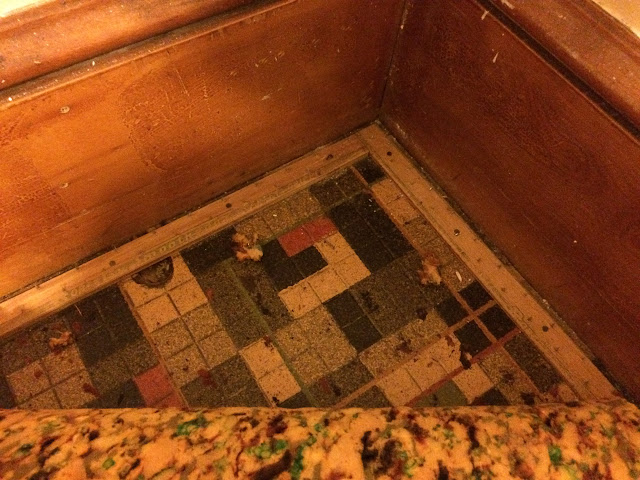 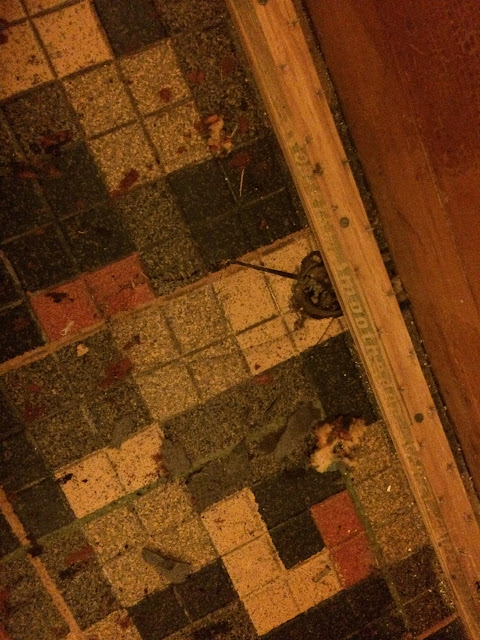 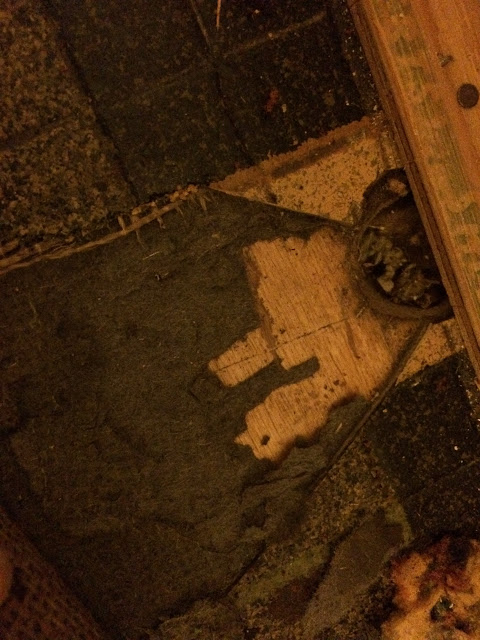 So I promptly put the carpet back down and set it aside for another day. Well, after yelling a lot and wandering around in a daze of heartbreak.

I am feeling a smidge better because as you can see in that last picture, the glue has dried up quite a bit and it might be possible to take it all up without damaging the floor too much. Before I dig into it, though, I have a call in to get it tested for asbestos. Never dull!

From Viva Carlos, of course!


1. What is your biggest source of caffeine that gets you through the day? (drink, not just brand)
Tea, with a little bit of sugar. If I'm drinking coffee something has gone seriously awry. I'll usually drink 2-3 cups of strong black tea in a day. If it's a coffee day: iced coffee, mocha, cream, sugar. I really want to be drinking melted coffee ice cream.

SIDE NOTE: a Facebook meme last week suggested that coffee ice cream might only be a New England thing. Is this true, rest of the country? That would be horrible.

2. Do you honestly think your trainer is the best trainer for you?

I'm not particularly riding with anyone right now, but I have a really terrific selection of trainers to choose from if I do want to take a lesson. I dunno. Is there even such a thing as the best trainer for you? Wouldn't that change all the time anyway? I think the head trainer at my current barn is as close as I've ever come to a trainer who could be a good fit for me across multiple phases of my riding life. That's plenty good enough for me.

3. One token of advice a fellow rider/trainer/horse person told you that you still remember to this day.

4. If riding meant costing your family so much money that they’d be basically on poverty line, or making your family terribly unhappy (if they were not supportive or understanding, etc.) would you still do it?
sigh. Probably, yes. But I guess I would draw a distinction between "keeping Tristan healthy and happy" and "riding." Say if there were a way to field board him with good care that would cost less, but meant I could not ride, I would take that compromise.

5. (Girls) would you ride while pregnant?

In the extremely unlikely and undesirable event that I found myself pregnant: hell yes.

6. How do you tell when a horse likes someone/has bonded with you or someone else?

Willingness and eagerness, a certain anticipation in its expression. Even for naturally eager horses, there's an extra spark when they really like the person they're with.

7. Are horses capable of loving, in your opinion?

Absolutely. It might not follow the same outlines as human love but there's no doubt in my mind that they experience what we could call love.

8. If you could have one horse from your past come back for 5 minutes, who would it be, why, and what would you do with them in those 5 minutes?

9. Should a trainer also be a friend, or should it be a student/teacher relationship?

I've done it both ways. I prefer friendship, but not over-involved friendship. But I totally get why some people prefer a strictly professional relationship.

10. One piece of advice/training you were given by a trainer or mentor that you look back on now and view it as incorrect?

Yeah. A previous trainer told me to sell Tristan and get the horse I deserved. She told me that she had been studying with an animal communicator and that he was telling her that he was miserable and he couldn't be the horse I wanted him to be.

I cried until I threw up.

Within a few days I had recognized it as completely wrong, though. That was years and years ago, and we're still happy together. I made the decision that I would follow him, and not take him where he didn't want to go. That was the horse owner I wanted to be.
at 10:00 AM 7 comments:

Oh, okay, not little snags. I haven't been riding my horse terribly well lately. He hasn't been cooperating either, so there's that.

Right now, here's one of our problems: cantering improves the trot. But he is not quite strong enough to hold himself well in the canter.

So I am left with, after a 15 minute walk warmup, shoving him through the trot, insisting on forward and through while begging for any semblance of softness. He is stiff and sore in his hind end, I know this; I am attempting to remedy this in other ways. But he is not so stiff and sore that he cannot do the things I am asking of him.

(This, I think, is the endless daily compromise of an older horse. He is sore and he is tired. But the ways to fix that involve more basic dressage. There is a lot of working through to get to the other side. He's going to come out of his stall stiff no matter what; but he is a horse, and horses live in the moment, and he doesn't believe me that after warming up his body will feel better, and that the daily work of simple dressage is keeping him healthier and more limber overall.)

Cantering: that helps. A lot. It gets him excited, it breaks up the tension in his back, and it is smoother and easier for him right of the bat.

Best of all is cantering forward on a loose rein, with me out of the saddle.

We cannot do that outside, not yet; though he is way better than he was earlier this summer, when he was bolting hell-bent for leather at the slightest provocation, he is still not what I would call reliable enough for a forward canter in half seat on a long rein. Bolting straight is one thing - bolting sideways is another.

When we are inside, it works, and it helps, but it's summer in Vermont, and we don't want to be inside.

So we canter in a more constrained manner, with a firm hand on the reins, and only occasionally do I feel secure enough to stand in my stirrups. Which lessens the effectiveness of a good long canter. Which in turn makes the trot work that much harder.

I tried to get away with just working up through the trot last night, and it was awful. I spent 40 minutes bullying him into softness, which is really not fun.Or good. Eventually he got there, and he got all the praise, and when he gave me a nice soft 20m circle in the trot we called it quits in the upper ring, and I made the mistake of picking at him a bit more in the lower ring.

But afterwards he was nosy and affectionate and sweet, so there's that, at least.
at 11:02 AM 2 comments: