You know what I suck at? Waiting. I'm great at planning, I'm great at figuring all the tiny little details out but then when I'm left waiting for everything to come together, for all the pieces I've put in play to line up, I start to fret and twitch and basically lose my mind bit by bit.

Which is my way of saying that last night I basically cycled between nightmares about a big program I have coming up at work and Tristan's vet appointment tomorrow.

I would like to ride my horse again someday, universe. Even if all we ever do is trail riding, I would just like to sit on his back again. I'm trying not to get desperate, but it's really hard to watch him limp around each time I go visit and still not quite know why. It's hard to have all these hopes and plans for the way we'll fix it but not have any level of confidence in whether they'll work out.

(A friend's horse just got over an abscess in a week and is sound again and I am so jealous and maybe a little bit bitter and a horrible person for being either, but I can't figure out where I went wrong somewhere in this whole mess.)
at 9:33 AM No comments:

Some planning progress, finally: farrier will be out early next week, probably Monday or Tuesday. I just chatted to the vet, and we'll all meet at the barn to do a full workup.

Schedule will go something like this: pull shoes, do x-rays, have vet and farrier look at the x-rays together, tranq him to trim, possibly do another set of x-rays (I'm budgeting for it if they want, to check angles etc., if they're all going to be there might as well do it 100%), then keep him tranq'd to put shoes back on.

My worst case right now is a mechanical founder with accompanying soft tissue tears. I think he'd be more lame than that, but the shape of the foot is so awful I am afraid of coffin bone movement, which almost certainly guarantees soft tissue strain or tear. If it's severe enough, he goes into crisis management mode and we use a recommended local farrier for regular trims every 2 weeks or so to micro-adjust and try to compensate.

My best case scenario is simply major discomfort from underrun and long heels, combined with the flair and the missing hoof wall from the abscess, and the farrier is able to take significant foot off and relieve a great deal of that. My magical scenario is an instant cure but I think he's been too sore for too long to expect that.

What will probably happen is some middle ground with waiting: x-rays show clean but there's clearly soft tissue strain, and the foot can't be entirely corrected with this shoeing, so he may be on a longer-term painkiller to keep him moving more easily until the next shoeing. I'm about 95% certain that the worst of the missing foot will be gone after the next trim, in another 6 weeks. I think it will be April or May before the top hole - at the coronet band originally - grows out. I think it will be another 6-9 months after that before the scar tissue from the coronet band stops growing out lumpy. (It's easing up a bit already, thankfully.)

Someday I should write this all up clinically and submit it to a vet somewhere, because wtf, people. Worst. Abscess. Ever.
at 10:13 AM No comments:

Heat is back in Tris's heel, and he's on bute until further notice to keep him more comfortable. At this point, we are in a waiting game: within the next 2 weeks the farrier will fly up (he winters in Florida) and when I know the date I will get it off from work and call the vet. We'll have a big ol' budget-busting day of x-rays with the vet and the farrier both there to make sure alignments are ok, then trim from the x-rays, etc. I continue to hope that he will come sound with a trim, as his heels are so long and underrun and awful, and in the next trim or two the lower of the two abscess holes will come to the toe and some of the pressure will ease. I could be fooling myself. In my uglier moments I think that this will be it, that we might get him sound at the walk but not for riding, and I'll have to retire him. In my better moments, I feel confident that I'll be riding again this spring or summer.

In the meantime, it's been too blasted cold to visit. Tuesdays are stitch circle, so I don't go anyway, then yesterday I lost all willpower when the thermometer did not rise above 0. We are projected for a high of 2 degrees today, which  means by the time I get to the barn it will be back below zero. He's snug in his blanket, the barn staff has proven to be outstanding about communication and would let me know immediately if something were wrong, so I have elected to stay home and warm.

I've picked up a few books about horses from the library, and will be reading those and watching horse movies to review here in lieu of actual content while Tris's soundness is still in a holding pattern.
at 12:19 PM 1 comment:

Canada is Sole Bidder for 2018 WEG

Love,
The girl who just moved 2 hours away from the Bromont CCI*** course
at 2:15 PM No comments:

Email ThisBlogThis!Share to TwitterShare to FacebookShare to Pinterest
Labels: bromont

For those curious what a nastily under run & long heel with deepening sulcus + frog cleft looks like...ugh.

But from the shape of it you will see why I am counting the days until the next farrier appointment. 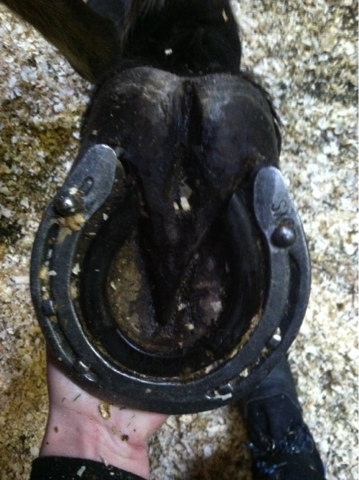 My friend Judith came out to work on Tris yesterday. I was glad to have her experienced eye on him - she's known him as long as I've had him, and she has an outstanding perspective and knowledge of equine body mechanics.

We walked him out a bit for her, and he's quite ouchy at the walk and to her eye, compensating with a swing of his left hind. She also detected heat in the heels, coronet band, and a bit up into back of the pastern of that foot, and noticed something which I had seen in the past few days: the sulcus of his frog (the grooves beside and on top of the frog) has gotten incredibly deep.

He turned out to be tight in his left shoulder, though she approved of the work I've been doing on his right shoulder to loosen him up there, and a bit in his lower back.

Game plan: bute him until the farrier gets out to do his new shoes, in about 2-3 weeks. I checked in with the vet today and she agreed, and if 2 weeks or so after he gets his foot re-balanced he's still just as off, we'll start with another round of x-rays.

I also picked up some basic thrush stuff (Absorbine Hooflex) at Tractor Supply and I'll be paying extra attention to his feet and dosing him from time to time with that just to make sure he doesn't start an infection there, too.

I stopped by the barn today while doing errands to groom and fuss over Tristan. I got there just in time to see him dewormed.

They also taped him at the same time - 965 pounds and 15.1. A little less weight than I expected but he looks in good trim, so it's fine.

He fussed about being dewormed. He's never been good for oral medication. He flung his head and skittered backwards but the barn manager was quick and efficient. I think half the reason he's still bad about it is that I'm terrible at it - it always takes me several tries to coordinate the tube.

I walked him around the indoor twice and resisted the urge to trot him out. He was eager and happy to go, and the barn manager told me stories about how he plays in the snow and is good buddies with the old dressage horse he goes out with. He's definitely feeling great, so that makes me feel better about not riding.

He's getting a massage this coming Sunday, and he'll be due for the farrier in another two or three weeks. After his new set of shoes, we'll see how he jogs out.
at 7:28 PM No comments:

Seven years ago tonight I became a horse owner. What a crazy, wonderful ride.

It's going to be -18 below here in the Green Mountain state, and so the barn manager texted me this morning asking if I still wanted Tris to stay naked. Eep! I asked her to put a barn blanket on him if she could and started shopping.

I also put the call out on Facebook for recommendations - partly tongue in cheek, as I had a marvelously tacky neon peace sign mid weight picked out.

Lo and behold, a dear friend from Flatlands messages me to say that she had her daughter's old horse's blanket still and her son was driving to Montreal tonight, did I want her to have him bring the blanket to me?

Wow! Yes, yes I did. So I just returned from putting Tristan's first-ever lined blanket on him. I present to you the world's worst picture of the world's most adorable mustang: 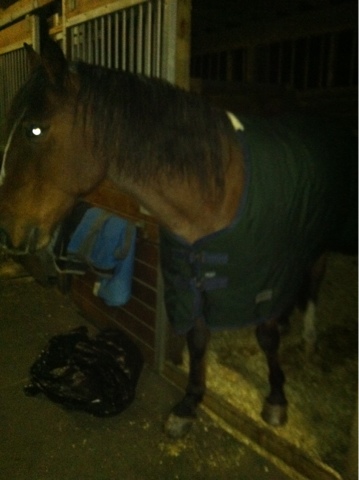 Email ThisBlogThis!Share to TwitterShare to FacebookShare to Pinterest
Labels: winter
Newer Posts Older Posts Home
Subscribe to: Posts (Atom)
A canter is the cure for every evil.
- Benjamin Disraeli