When I introduce people to Tristan, they always seem surprised that he's a mustang. Fortunately, he has permanent proof of his ancestry in the form of a freeze brand on his neck. All mustangs that have been rounded up by the Bureau of Land Management (BLM) as part of an approved gather are given a freeze brand on the left side of their neck, just below the mane and about 6-12 inches below the ears.

What is freeze branding? Many people are familiar - from the movies, if nothing else - with hot branding: heating a piece of iron and then applying it to an animal's skin. The brand burns through hair and then into skin, creating an outline of scar tissue in whatever shape is necessary: a ranch's ID, for example, or a number. In horses, the most common are breed association brands. There's a good list of them on the NetPosse website. It's not a painless process, but it is relatively quick and very common.

In freeze branding, the iron is super-frozen using liquid nitrogen, dry ice, or some other chemical coolant. When held to an animal, instead of burning through to the skin, it kills the pigment-producing part of the animal's hair, and leaves the hair white in the shape of the brand. They are slower to work - you have to hold the brand on longer to get the desired result, and they don't appear immediately, but rather as the hair grows in. It's less painful (some resources say totally painless) but trickier: because you have to hold the iron for longer, there's a chance of smudging.

In America, only range-gathered BLM mustangs have a consistent system of freeze branding. (In Australia and New Zealand, Thoroughbreds & Standardbreds are marked with freeze brands.) This is not to say that if you see a horse with a freeze brand, it's automatically a BLM mustang. Some owners choose to freeze brand their horses (usually in different locations and with a different system). Some mustangs are never freeze branded (if they were born in captivity, for example).

BLM mustangs are freeze branded on the left side of their neck, about an inch or two below the crest, and about 6" below the ears. There's no precise measurement (Tristan's is further down than 6" for sure, and I've seen some much closer than 6"), but if you see a horse with a freeze brand near the crest on the left side of their neck, you're probably looking at a BLM horse.

Every BLM freeze brand is unique. They're meant as a permanent identifier of an individual mustang. Knowing how to read them can tell you a lot about the animal you're looking at. There are three basic parts to any freeze brand. Here's a good breakdown: 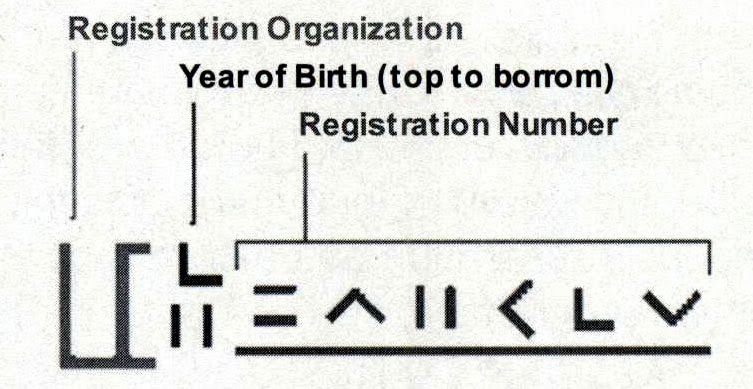 "Registration Organization" in this case is always the same: US Government. That peculiar sort of LC at the beginning of this diagram is the government-specific ID. So that's another clue that you're looking at a BLM mustang. (There are ID marks for other breeds and states, by the way, but I've never seen one in person.) But what do the angles and lines mean - how are those translated into numbers?

The BLM uses something called the "International Identification System" which they all the "International Alpha Angle System." It was developed by Veterinary Cryobiologist (really!) R. Keith Farrell of Washington State University (along with a few others, such as an FBI agent and a few people from breed associations) and first published in the Journal of Forensic Science in January 1981. (Here's the abstract.)

Basically, Professor Farrell was trying to promote an international system of identification for horses that could be registered and tracked in order to prevent crime. His argument was that commonly used identifiers such as color, whorls, chestnuts, and other markings were unscientific and imprecise. He proposed his alternate angle system as a way to get everyone on the same page. As you can guess, it hasn't really caught on widely in horse circles - have you ever seen a non-BLM horse with one? Kryo Kinetics USA LLC tries to carry on that work today, and will register your horse for you if you choose to have it freezebranded.

Anyway, enough history. What do the angles stand for? It's a very simple system. 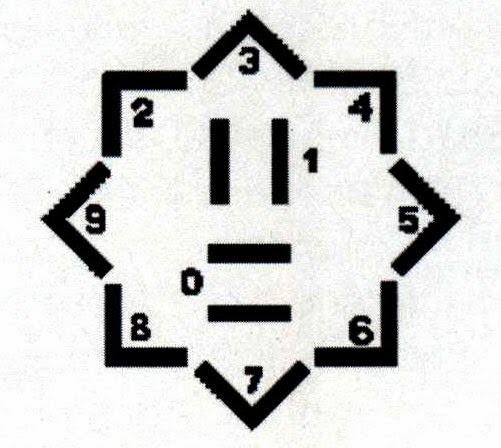 So let's look again at the freeze brand above, this time deciphered using the angle system:

Ta-da! We're looking at a BLM mustang that was born in 1981 (the first year they began using the angle system, incidentally) with a registration number of 031987. There's one more step to learning more about this particular animal, though. The BLM assigns registration numbers according to the state the mustang was gathered from.

So, armed with that information we know we're looking at a BLM mustang that was born in 1981 and rounded up in Oregon. In theory, the BLM should also maintain a database of the horses they gather, and should be able to tell you when a particular horse was rounded up based on its registration number. In practice, good luck getting them to answer your phone calls. (I've generally found them unresponsive in the extreme.)

What does this look like on actual horses? Let's use my own wild pony as an example! 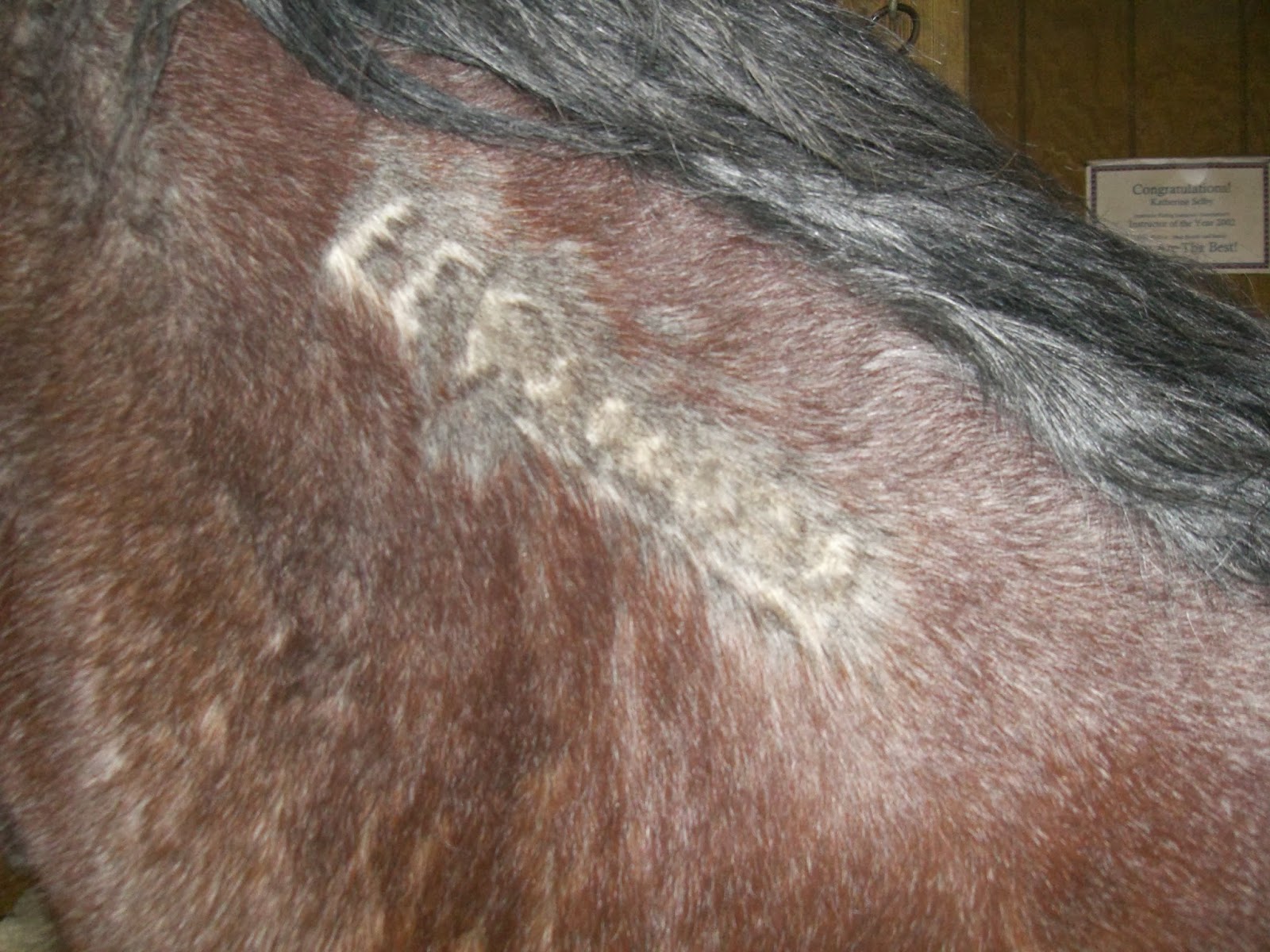 Yeah, not as easy, is it? I'll grant you that this photo doesn't help, but I'll also tell you that it's not that much easier to tell in person. In fact, since he was shipped to me, I haven't clipped down to the skin on his neck to get a good clear look at his brand. This photo was taken a few days after he arrived. You could argue that this is the best it will get. His roaning makes the numbers blur into the hair around them. Beyond maybe a flea-bitten gray horse, roans are the toughest on which to distinguish freezemarks.

The first few are easy. There's that government LC, right up front. Then the year, 95.

Then the next two are straightforward: 5 and 5. In better light, you can tell the next one, too: it's an 8.

After that? Honestly, the next two are kind of a blur to me, too. The last one is easy again: another 5.

I'll take a shortcut and tell you that his full, registered, identification number is 95558535. He was foaled in 1995, and rounded up in Nevada, per that 55 number which is smack in the middle of Nevada's range. (Some vast majority of all mustangs still wild in the west today are in Nevada, so Tris is a pretty typical example.)

That's all the freeze brand will tell you. You can, in theory, go back to the BLM and ask them for more information. If they're feeling generous they can look up more for you, like potentially the gather (or roundup) information, maybe the original title holder. Again - I've never been able to get much out of them. (I have more information on Tris that I'll share at a future date, but I have that because of the paperwork that came with him, not because of

But this is a start. Let's look at one more freeze brand that's an easier read. (Taken from a random Google Image search; I don't know this horse personally.)

So now you know. Google Image search for "BLM freeze brand" to your heart's content and learn about the mustangs that come up, or impress horse people at cocktail parties, or maybe put that knowledge to good use someday when someone needs to know more about a horse they're looking at.

Any questions? Anything else I can shed light on?