(first things first: it is a triumph of will that I even got to this lesson, after my car died 40 miles away and I had it pushed in neutral to the gas station next door and the mechanic called me mid-day and I had a conversation with him that went something like, him: "Did the air conditioning work on this car before?" Me: "It did until it caught fire last summer. I haven't used it since." Him: "Wait, what?" All's well that ends well and I had a working car again by the end of the day. Whew.)

Anyway! Lesson. Good lesson. Ass-kicking lesson for both of us. A solid hour of work, some of it very high-quality, and with stretches that tested both of us equally and separately. I felt some strain in my core & thigh muscles after I got off! Dressage: not for wimps.

The overall theme of the lesson was straightness, and each piece of the lesson addressed a different way in which we were not straight and helped put us straight. First up: leg-yields. Worked on getting the whole body straight: first the neck, then the ribcage, then the hind end. No evasions, just good clean crossover. We also worked hard on getting just the right step: come down the quarter line straight, take one or two good steps, then go straight, then take one or two steps. We moved from quarter-line-to-wall to broken lines, off the wall to the quarter line and back. Walk and trot both.

Then we moved on to transitions: clear, sharp, straight transitions. Here, the challenge was more for me: not to corkscrew my body and drop my inside hand to my thigh. For him, though, less bend, more lift, and more alertness to my aids. We worked on fitting as many good crisp transitions as we could into a twenty meter circle.

Then, changes of direction, on diagonals both short and long. Go deep into the corners, get quality straightness on the short side, go deep into the corner again, and come off the diagonal - off the wall - with shoulders even, reins even, pushing from the hind end. I don't know that I've ever schooled diagonals like that in my life, but it was a hugely useful exercise to have someone really drill me on them rather than just use them as a way to change direction. 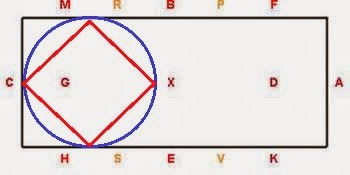 Ride straight lines on the distances from center to wall to wall to wall to center, thinking of the turns off each point almost as turns on the haunches. It's basically riding a square, which is an exercise I have done in the past but never really nailed. Pretty soon Tris had worked through and figured out what we were asking of him: don't magnetize your shoulders to the wall, push off with the inside hind to make the turn, be straight and even in the bridle. For me, it was a really good exercise again for the corkscrewing of my body and the over-reliance on my inside rein. Turning those tight corners was all about a deep outside leg and a steady outside rein. We did this at the walk and trot both directions.

Finally, we finished with some very short canter exercises, to get a similar feel of what we had been aiming for through the lesson: straightness, control of the shoulders, a more supple hind end. Eventually in our own schooling we will work on the changes of direction through the diagonal, but for yesterday - since we were both so tired - we worked briefly on canter down the quarter line: come down the long side at a walk, then a trot, pick up the canter in the corner, then come off the short side cleanly and without overbending, and keep straight down the diagonal, then drop back to trot, make the clean turn back on the short side, repeat. We only did it a handful of times, but I could feel how much easier it was to get Tristan straight through his body after all the work we'd been doing throughout the lesson.

In short: whew. But some really, REALLY good tools to work on in our own rides, and a really positive outlook overall. There were some really gorgeous, fancy strides in there, and Tris really stepped up beautifully.