I am fascinated by the world of model horse showing, and follow blogs like Braymere Custom Saddlery with deep fascination. When I was at Everything Equine earlier this summer, I saw a card advertising the Vermont Live Model Horse Show at a local farm store, and my interest was piqued. I went back and forth on whether I'd be able to go, but a friend's plans for the weekend fell through at the last minute, so off I went!

When I first entered the room, I felt super awkward. Really, really awkward. It was relatively small and everyone there was very busy doing their thing and I was the only creeper hanging around staring at things. I can dive right into social situations where I have content background - I am that weird soul who loves professional networking - but a new social situation where I knew nothing of the background? Eep. 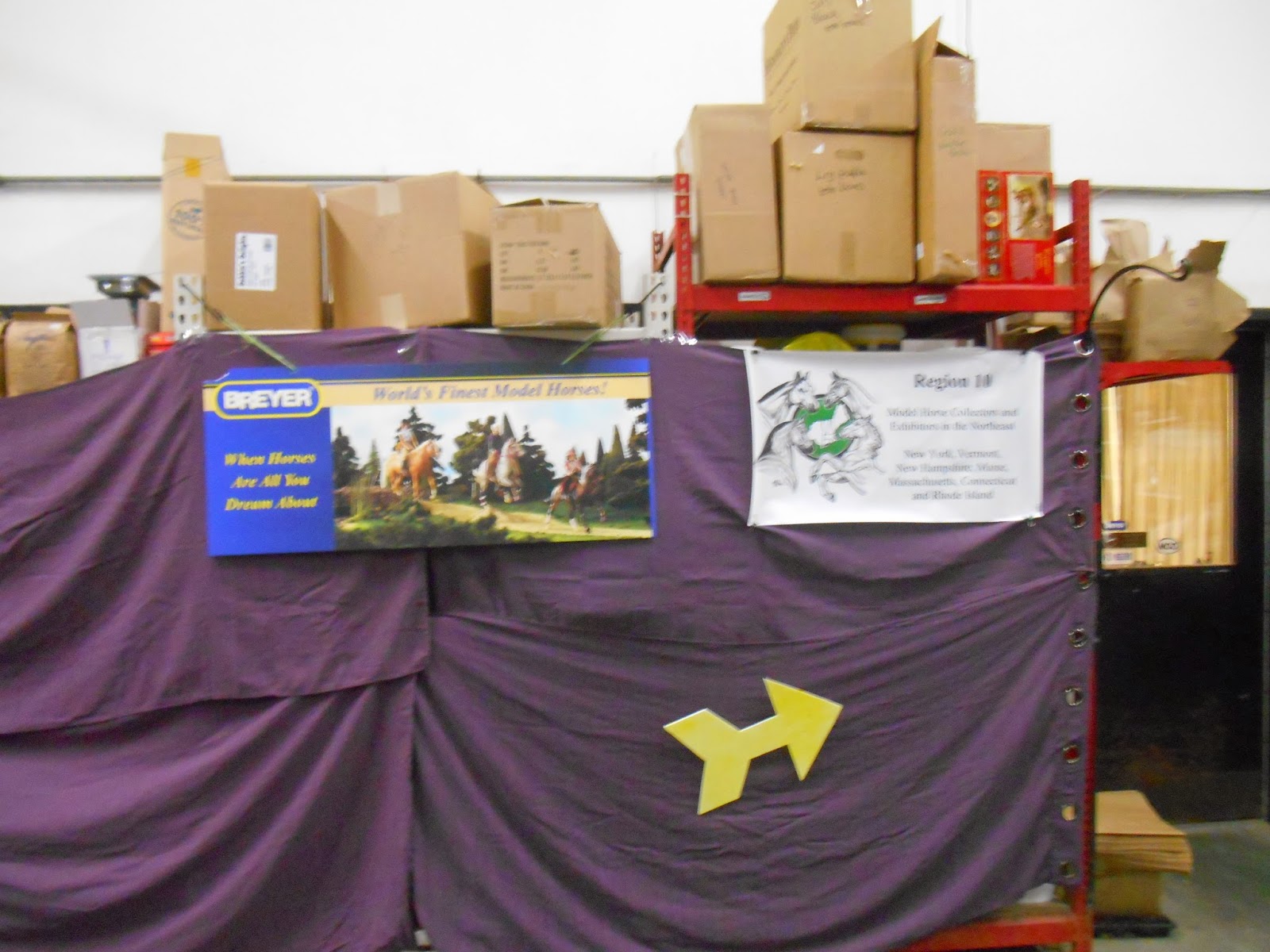 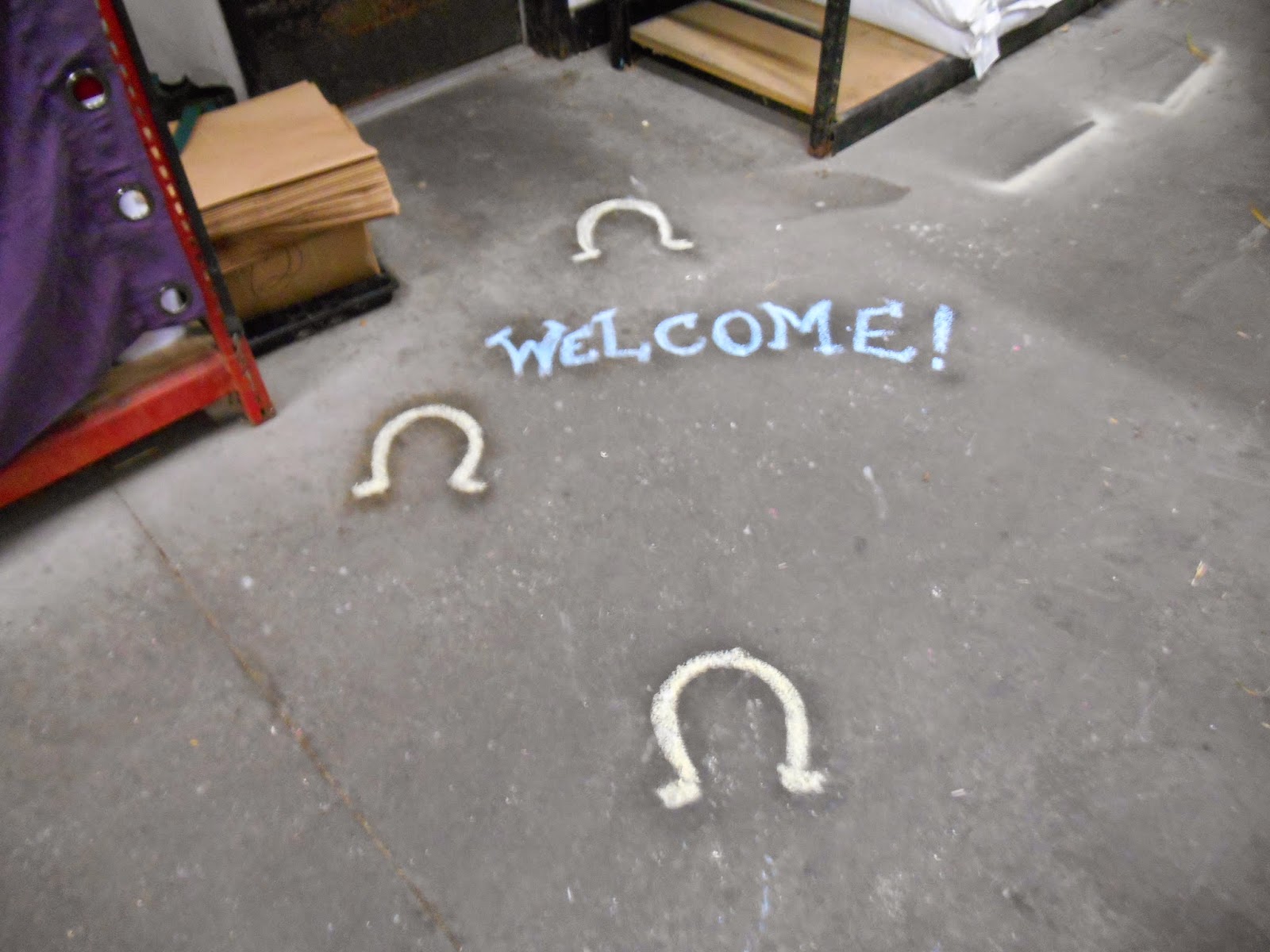 Thankfully, when I stopped at the front table to try and break the ice and ask if I needed to check in or anything, I struck up a conversation with one of the organizers. After that, it was easier to chat with some of the other show staff, from the helpers to the judges and a few people selling things.

I didn't stay for the entire show; I ducked out to the car to charge my camera (which of course was being finicky about battery life) and then wandered through the main store and got totally sucked in to painting a custom Breyer Stablemate. But I saw enough of it to learn a lot and see how neat it was.

I think the thing I was overall most impressed with was the way competitors talked with the judges after the fact, and how incredibly detailed the feedback was. I don't mean to take anything away from model horse showing when I say I had no idea that judges would be so careful as to have a long conversation with a competitor about the placement of their horse in relation to a fence so that the striding would be right relative to the horse's motion. Or the extra small strap on the horse's face meant to secure the bridle, but really an extraneous strap that wouldn't have made sense in real life. Or the suitability of a particular stance, breed, setup, etc. to the class and the activity described. 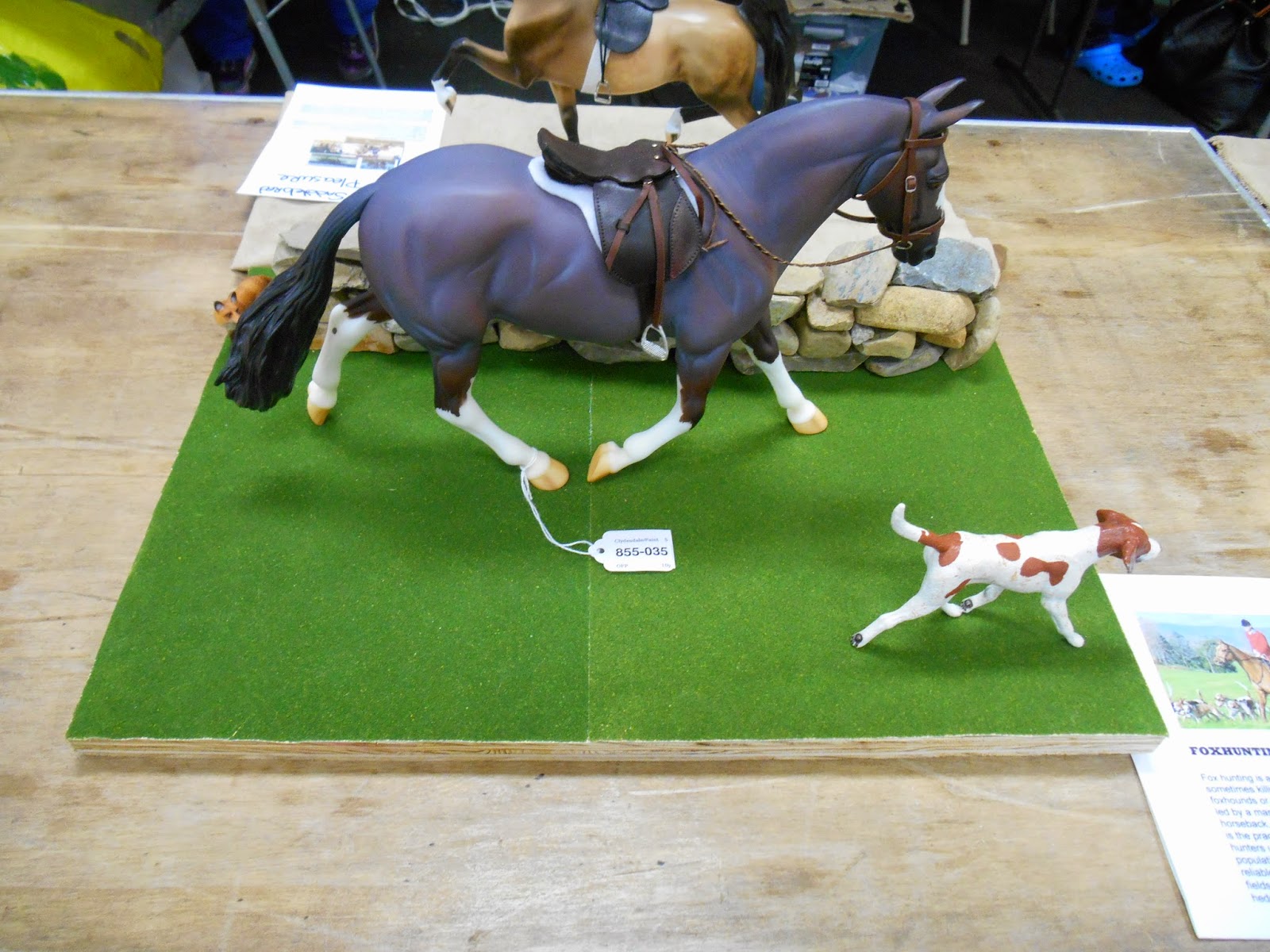 F'rexample, I loved, loved, loved this model, and he was used multiple times in a few different classes. He scored better or worse depending on his suitability. This was my favorite use of him, but it was not his highest-scoring class. (Check out the little fox peeking out from behind the stone wall, btw!) 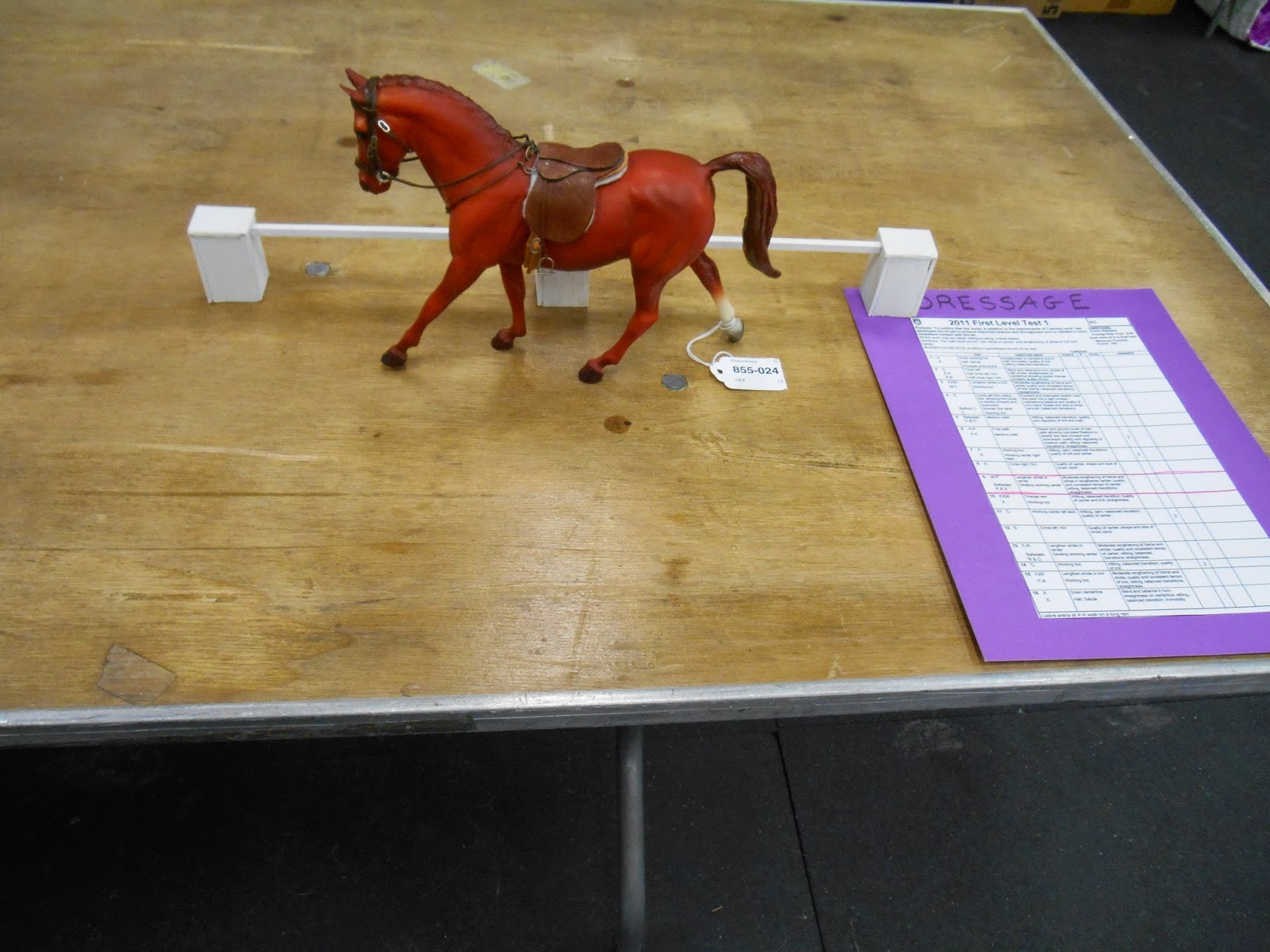 I watched the competitor place this horse carefully and change his position relative to the rail a few times, but she got knocked points because the letter on the ring (which you can't see) wasn't right for the particular movement she was trying to illustrate in the dressage test. Wow! 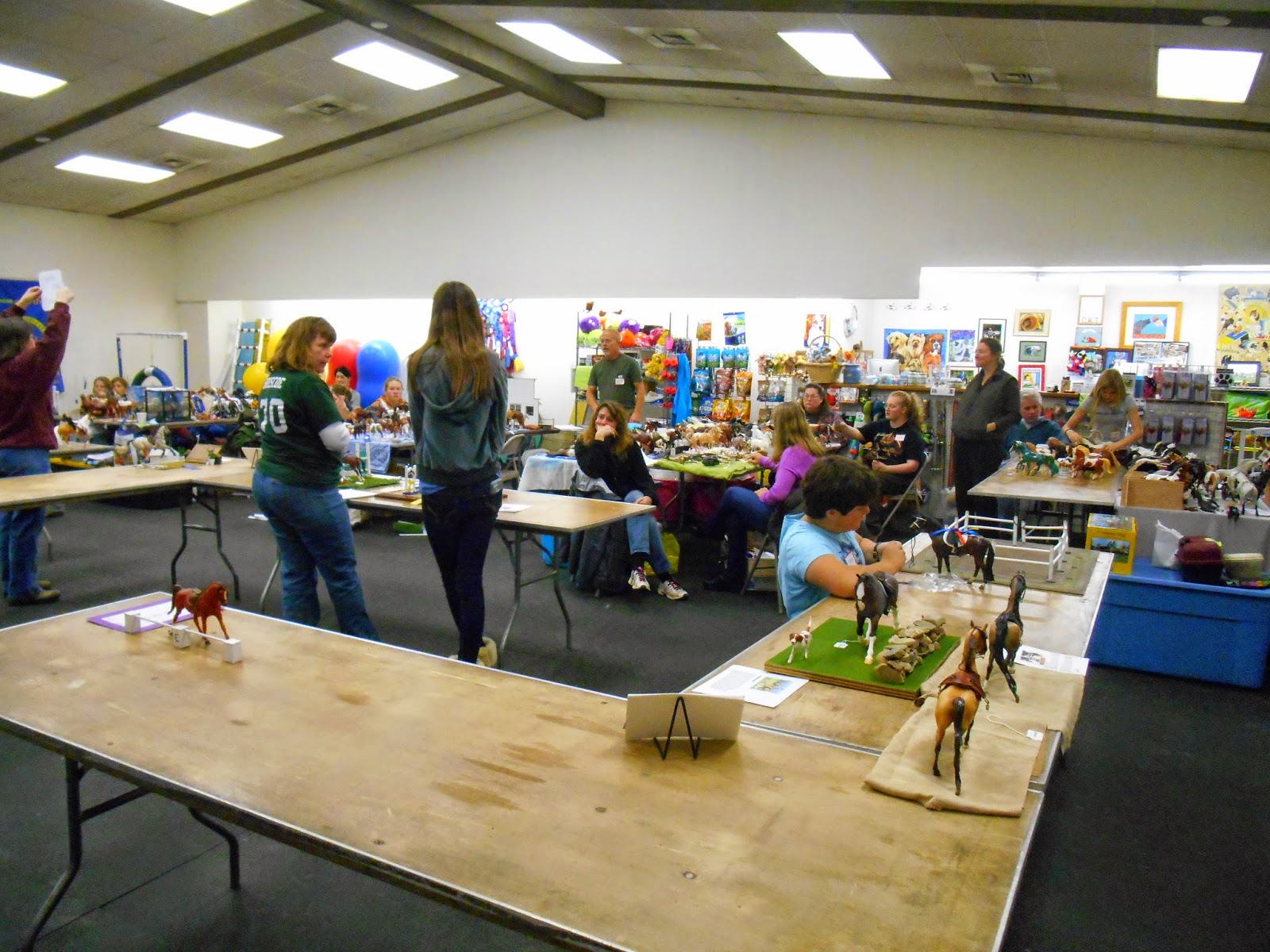 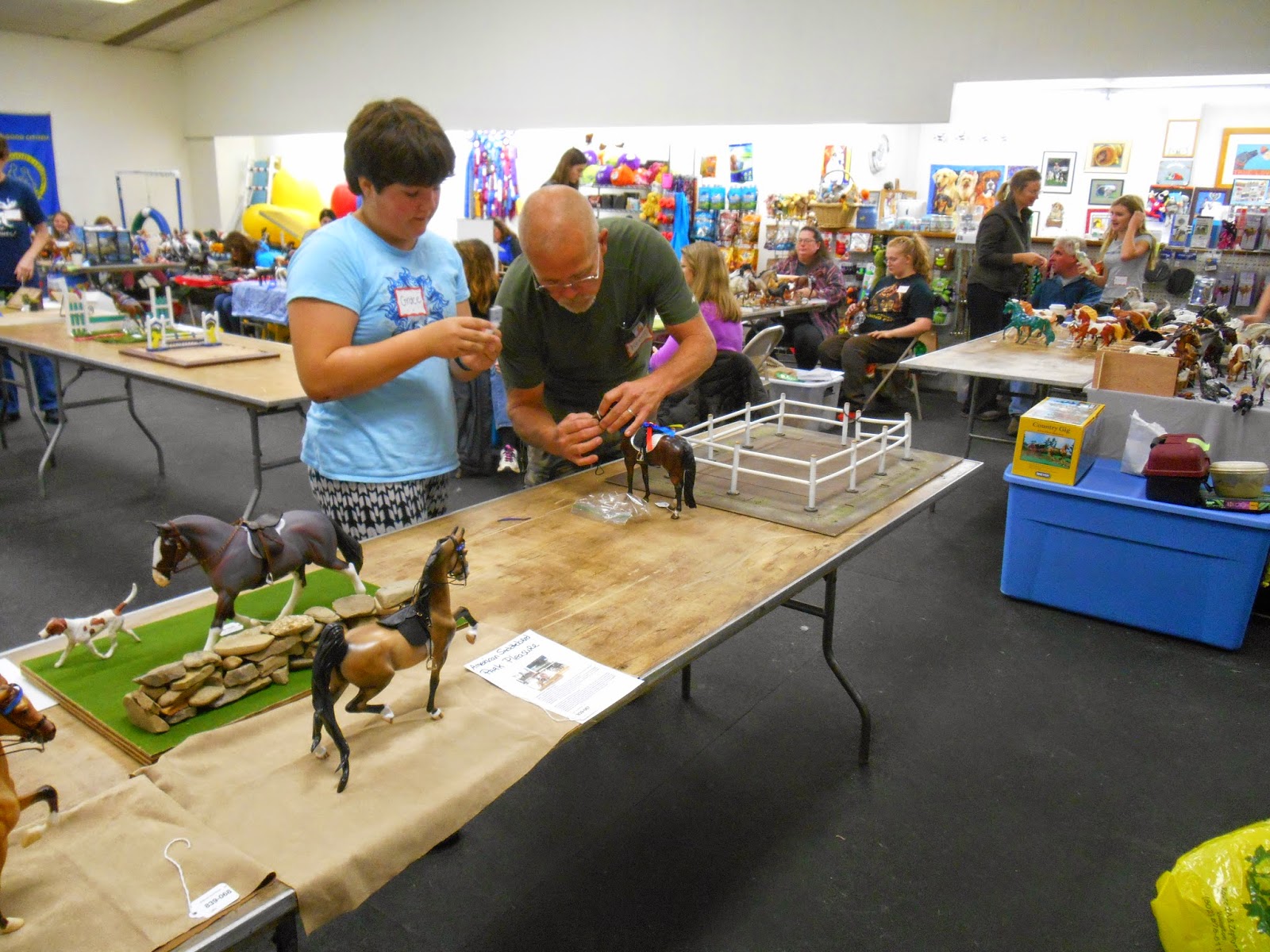 This young girl and her dad were showing in Intermediate, and they worked so well together and I may have gotten a little sappy about how great it was that he spent his day helping his daughter show model horses. <3 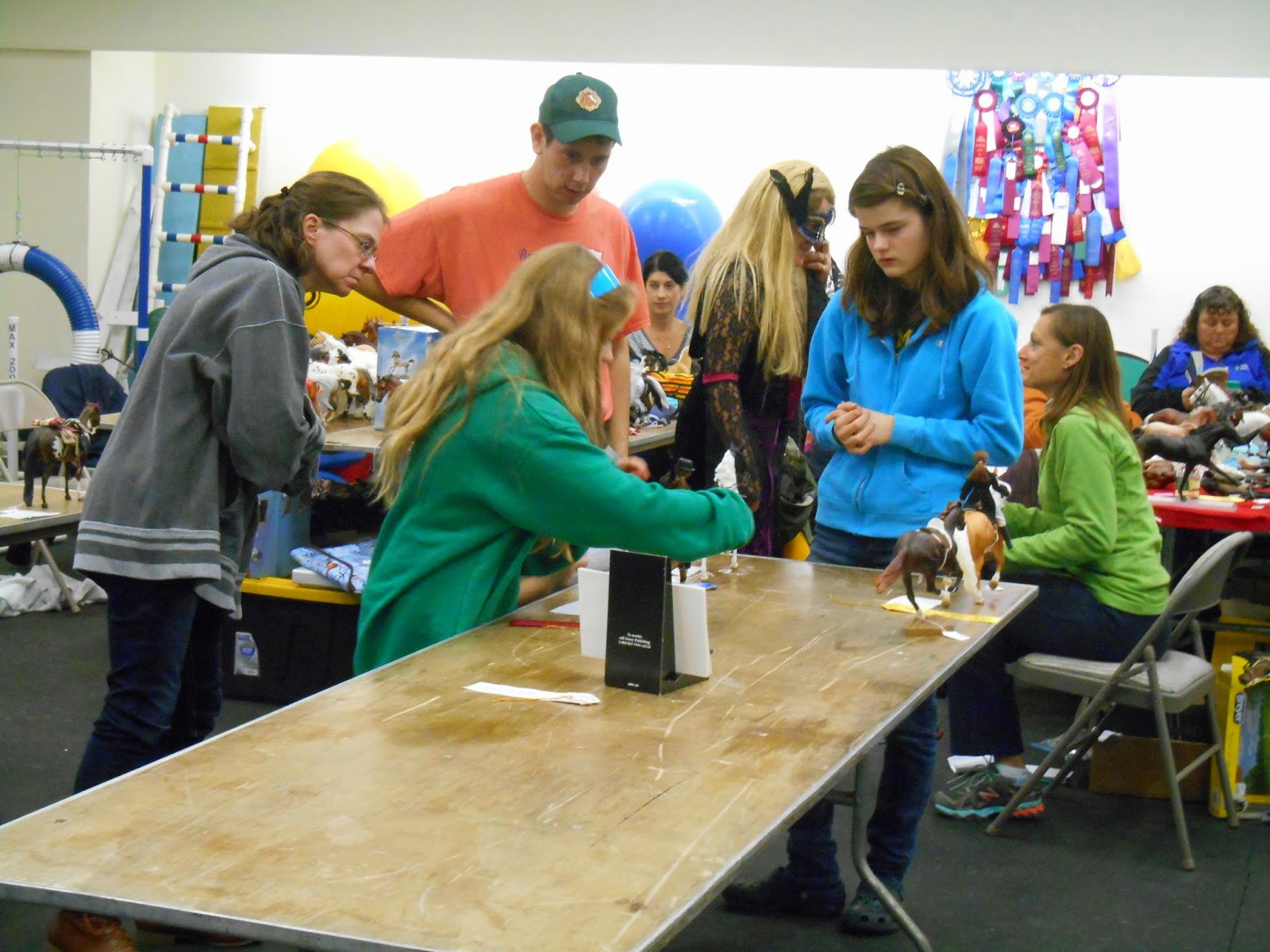 Another of my favorite things: the Novice competitors, and the way the judge worked with them to fine-tune their entries. She gathered them as a group after pinning each class and talked a lot to them about the way they presented. It was educational not just for model horse showing, but also for real-life horsemanship skills: how should this rider be sitting? how should this tack fit? etc. 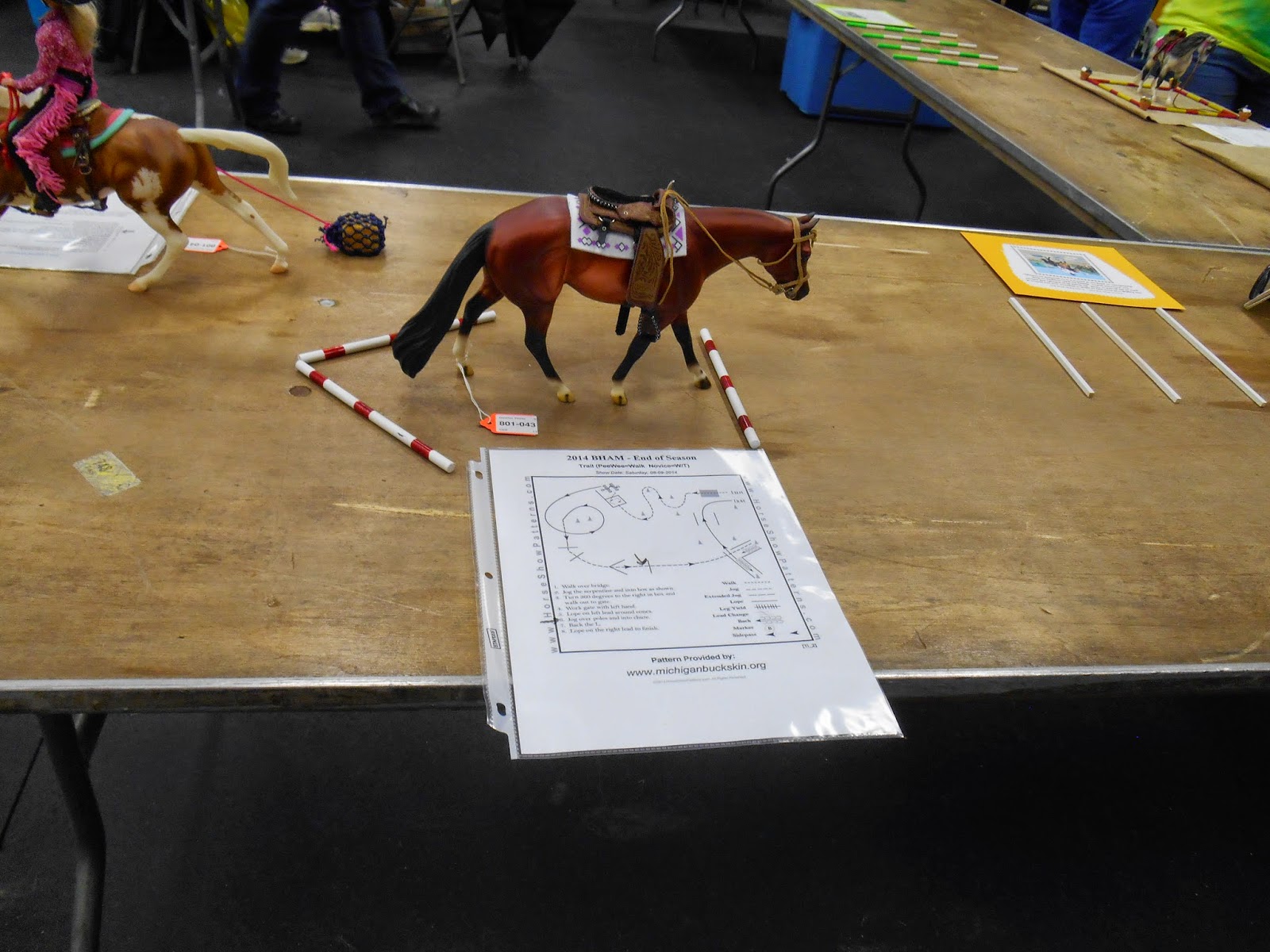 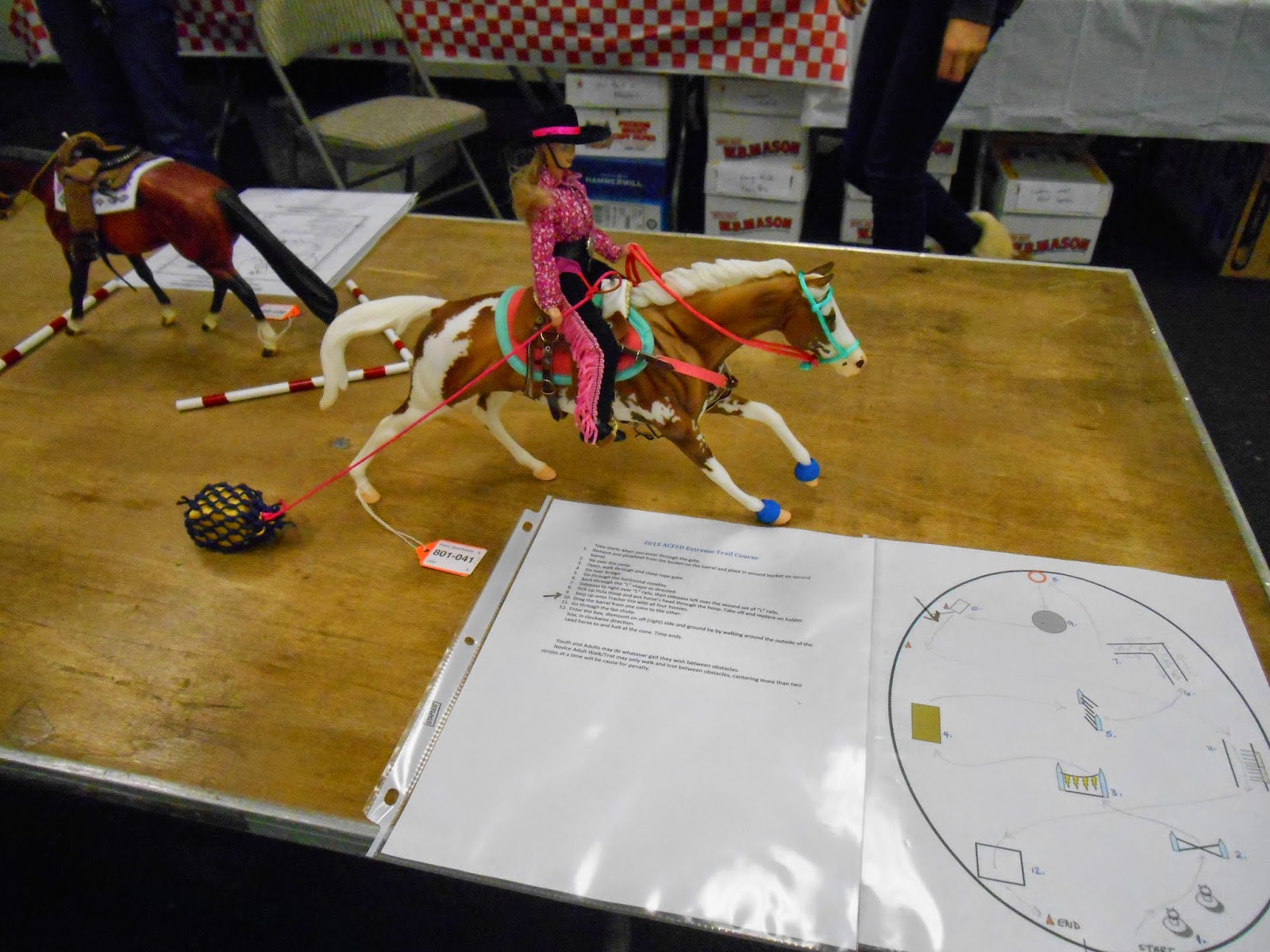 A couple of trail entries. 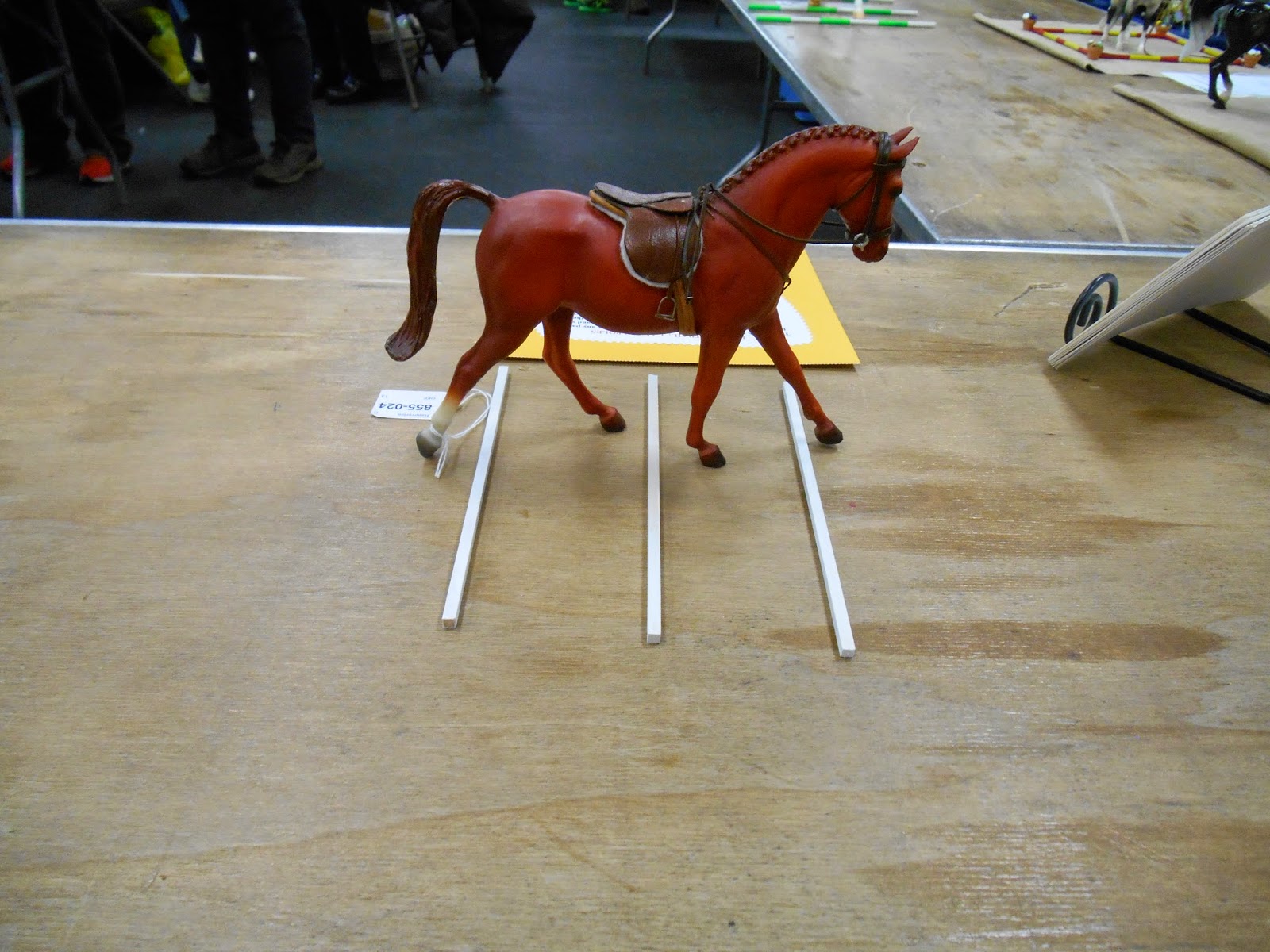 The same dressage horse from above, here doing canter poles. I stared and stared and thought this through for a long time. On the one hand, I would never set up canter poles like that for a real, live horse; it wouldn't accomplish anything, or at least not the things I want to accomplish on the occasions I use canter poles. On the other hand, it's not wrong. You probably could canter a horse through poles like that. And in this case it let the exhibitor use more poles and the "look" is better. Fewer poles might not have illustrated the point as well. So where's that line? I don't know! It's an interesting intellectual exercise that I didn't expect to encounter. 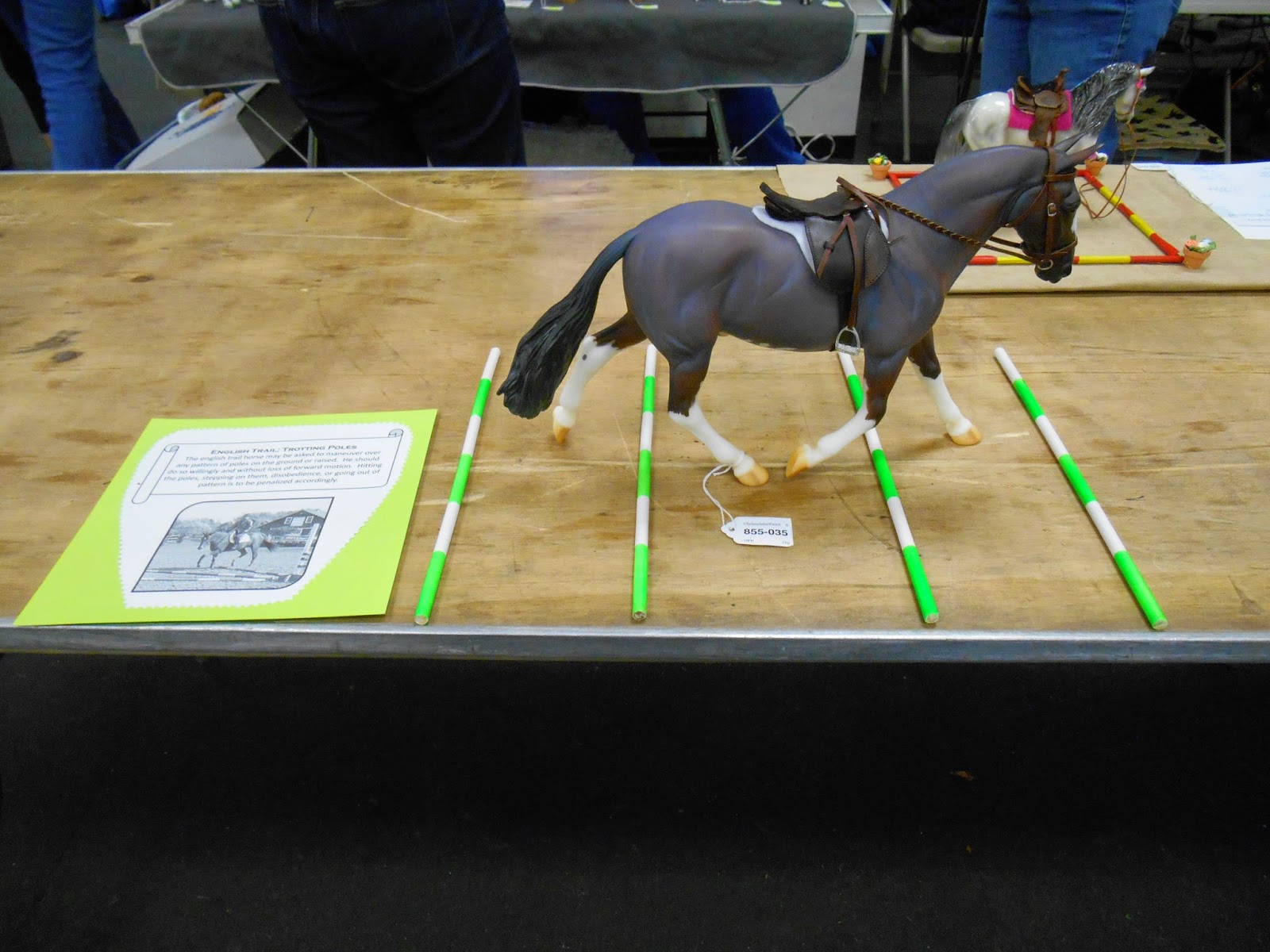 On the other hand, here's my favorite model for the day showing perfectly strided trot poles. BUT, and here's another thing I thought a lot about, a horse actually moving through trot poles correctly and with engagement would not have that pretty hunter daisy-cutter trot. There'd be a lot more action going on, particularly in the hock and stifle. If you saw a flesh-and-blood horse trotting like that through poles, wouldn't you expect him to drag that right front and knock the pole forward?

But are there models that are really perfectly suitable for that? Who's going to create a model with the right kind of movement and engagement for trot poles? So does it matter as much? Again, I don't know! 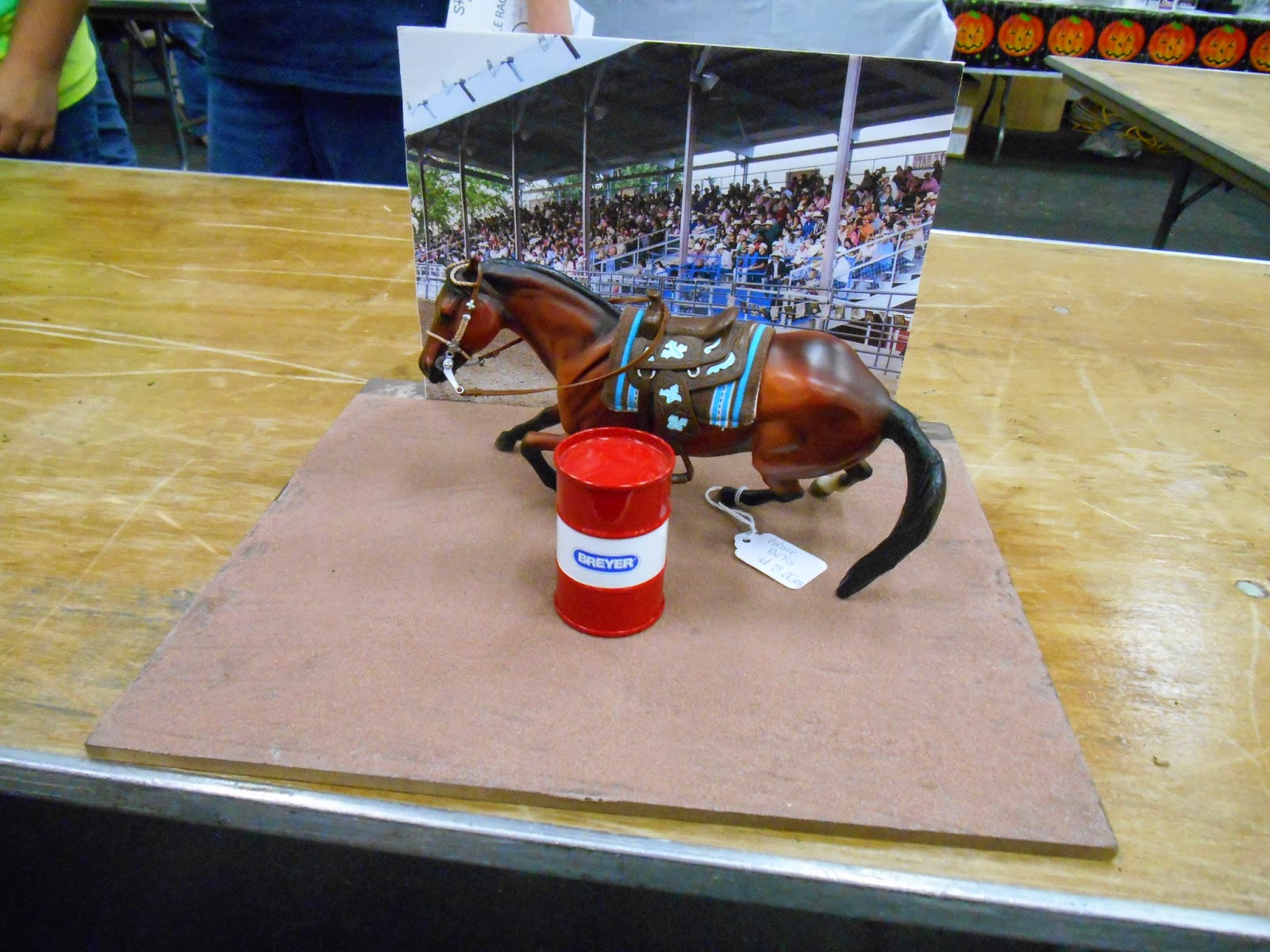 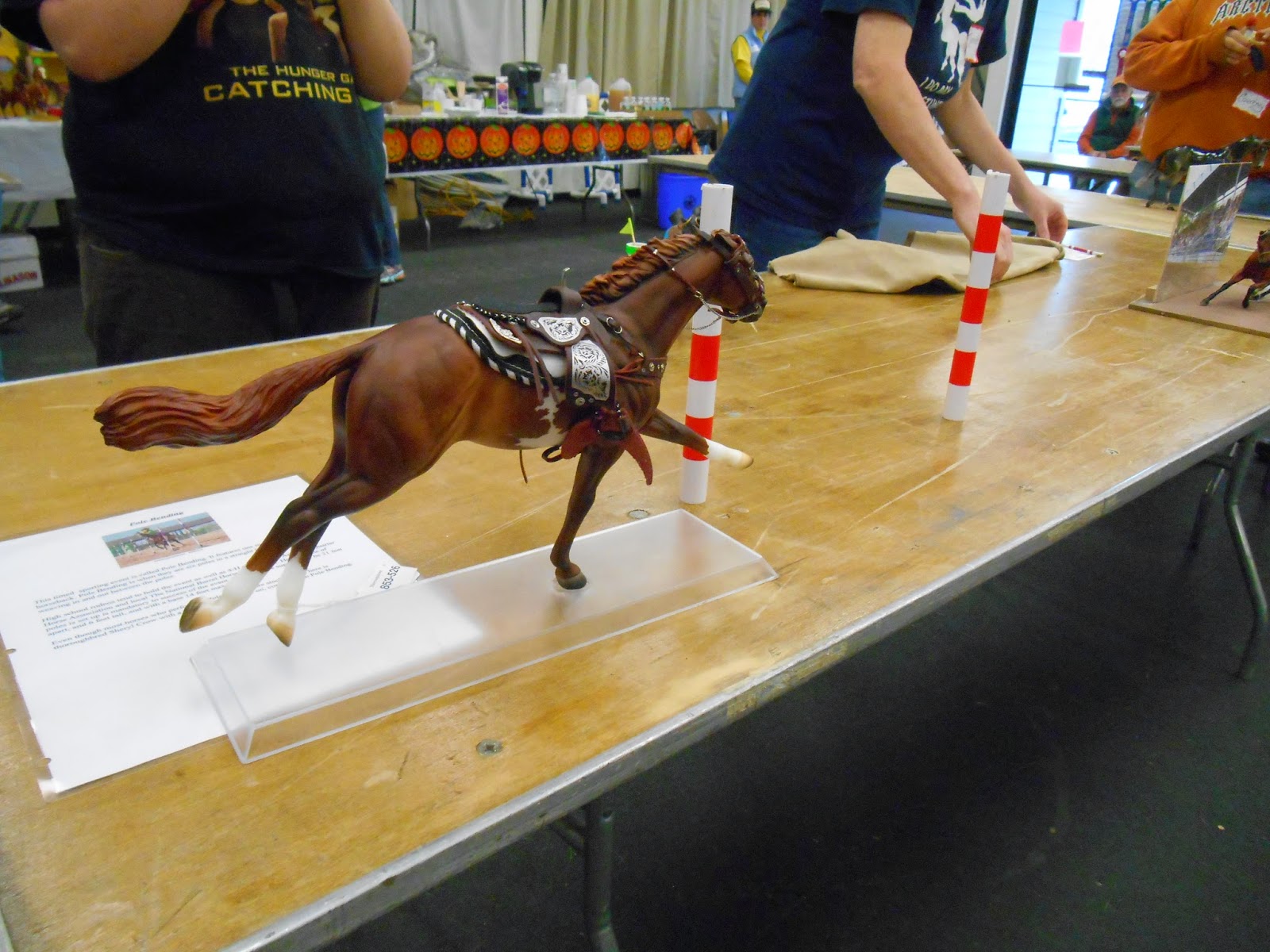 These were my favorite "action" models of the day. Can't you just see the fire in these horses? 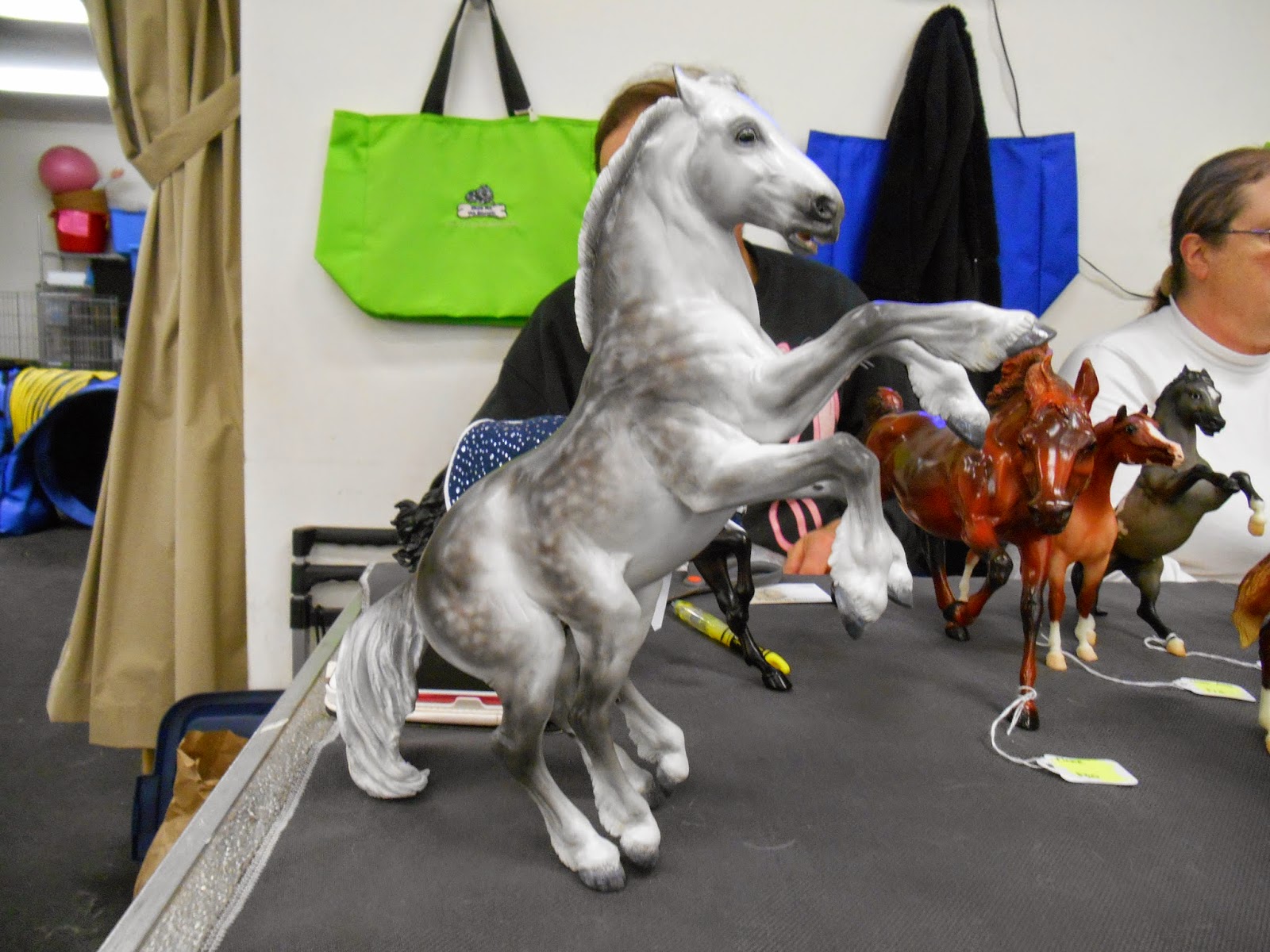 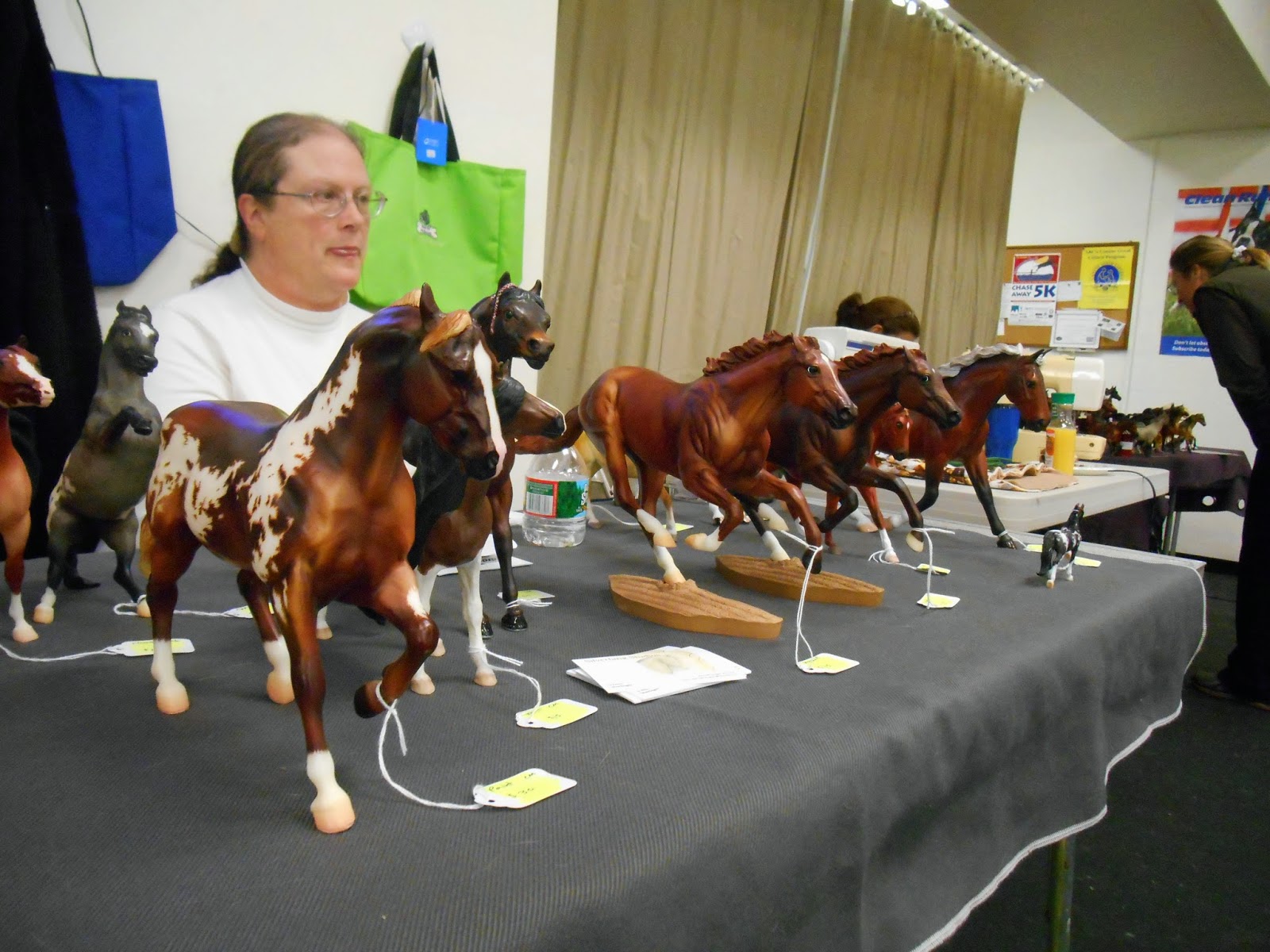 Custom models for sale. Don't think I wasn't tempted to check the price on that Sleipnir. The fiance would've flipped out.

Overall, I spent about 2 hours there watching and perusing. I would've had more pictures but a) I felt like a creeper, though I did ask permission multiple times and b) above-mentioned camera battery issues. I would definitely go again, and though I thought from time to time "how much fun!" I didn't really come away with the urge to do it myself. :)