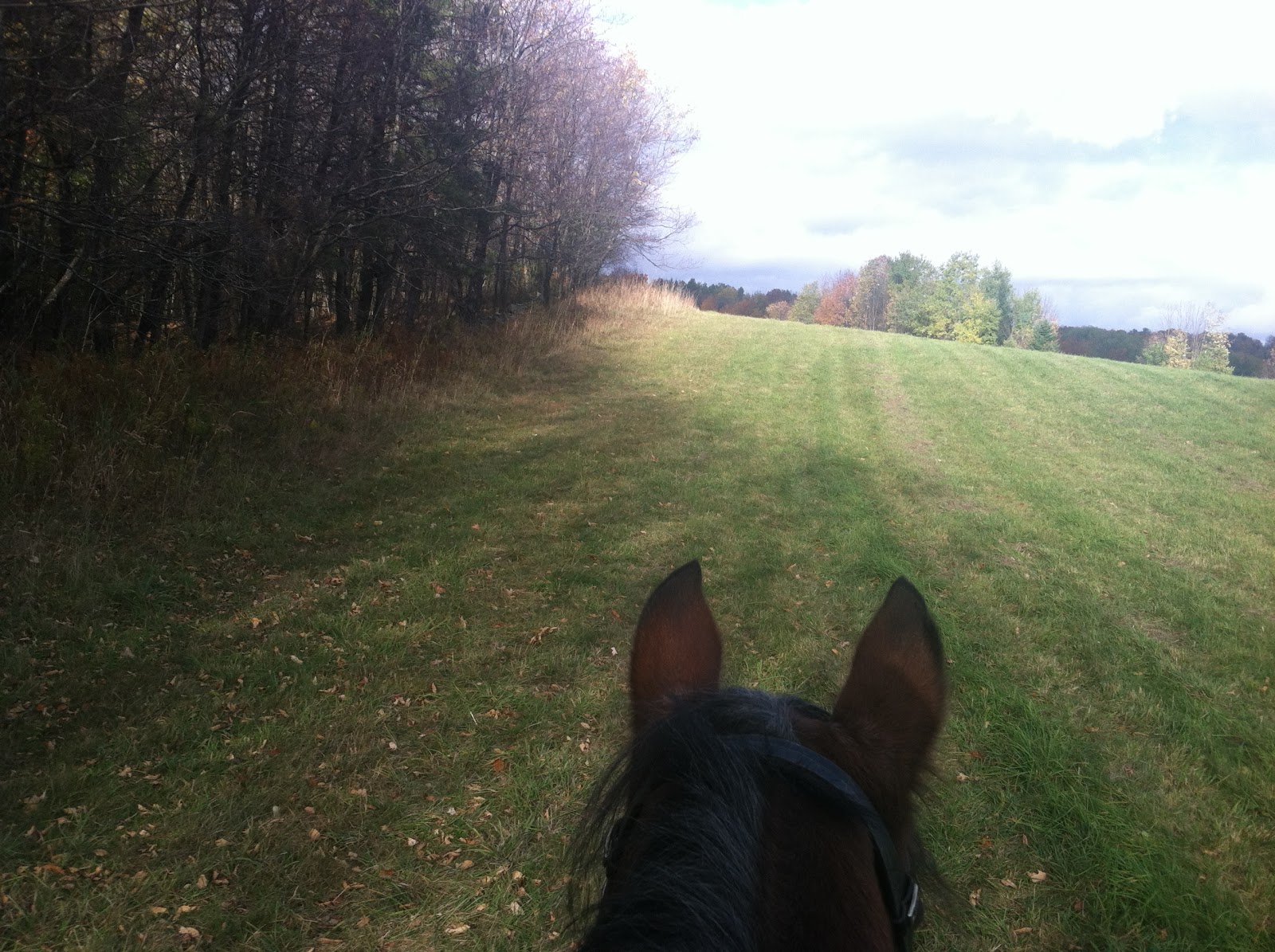 Friday was meant to be a long hack, but on the first downhill stretch Tristan didn't feel quite right. He was wobbling behind and not placing his front feet in good spots, and as a result he kept tripping. Finally, he went down to his knees and I had a long hearbeat's moment of sitting and kicked my feet out of the stirrups to jump off - but he stood up again. I jumped off and handwalked him a few yards, but he was moving easily, and diving for grass, unconcerned. 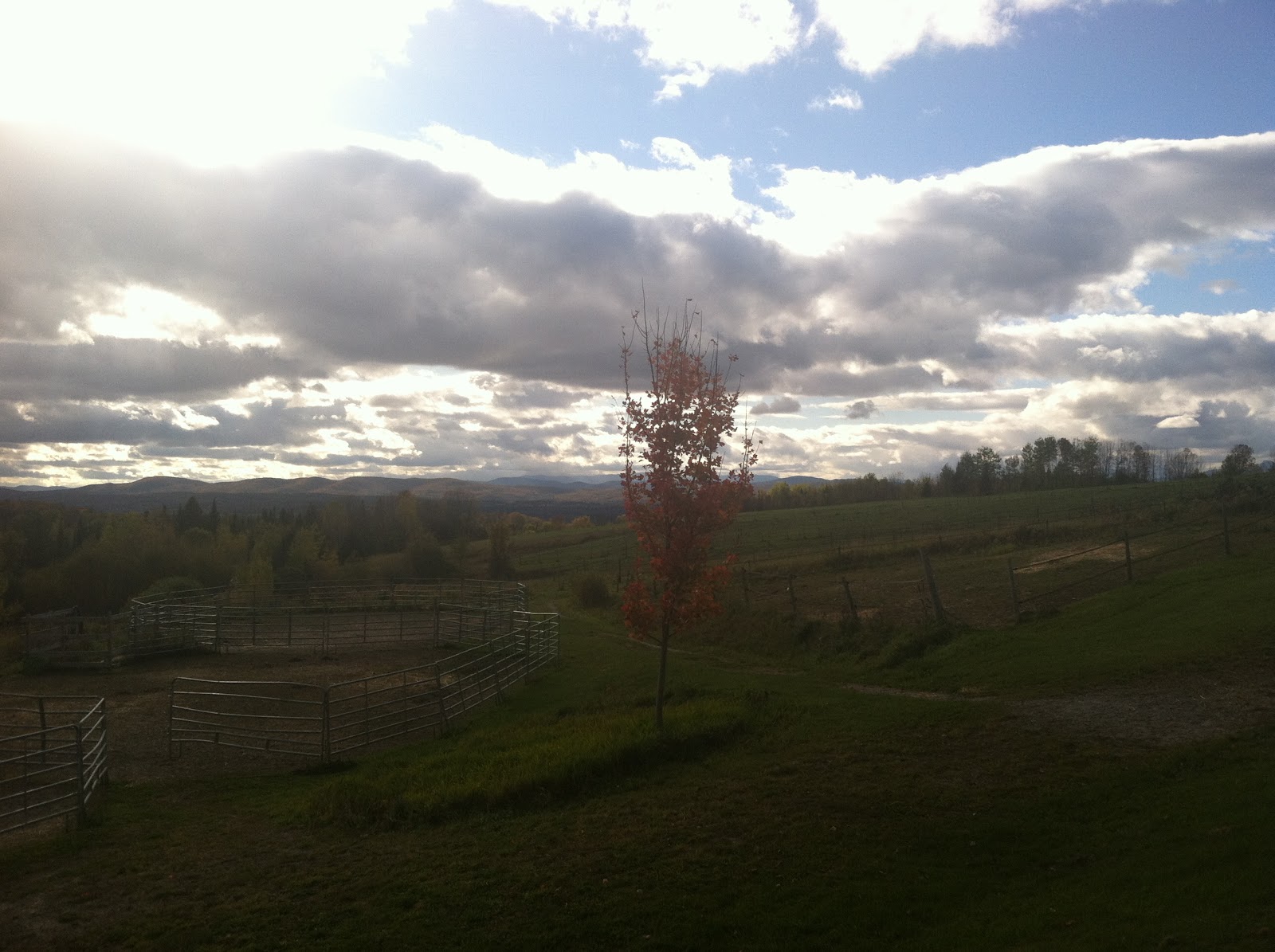 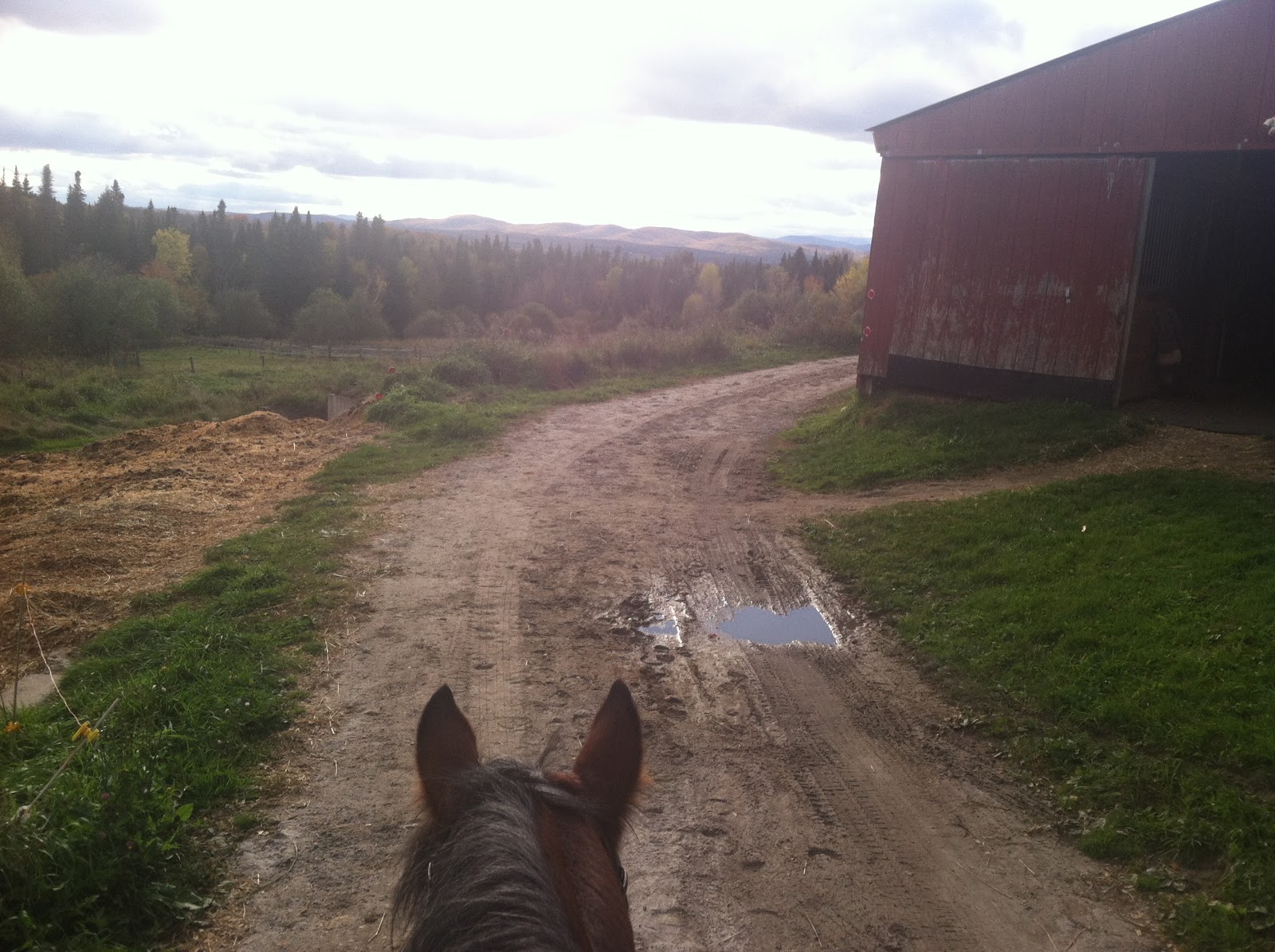 We ended up doing a very easy walk around the field, and then I walked him back to the barn, thinking I'd do a dressage school in the indoor and try and get him moving more evenly. The indoor was busy, so I asked if it would be ok if I rode in the fancy dressage ring on the hill. Sure, trainer said, just stay on the raked rubber footing parts, don't do any heavy work around the edges. Twist my arm! 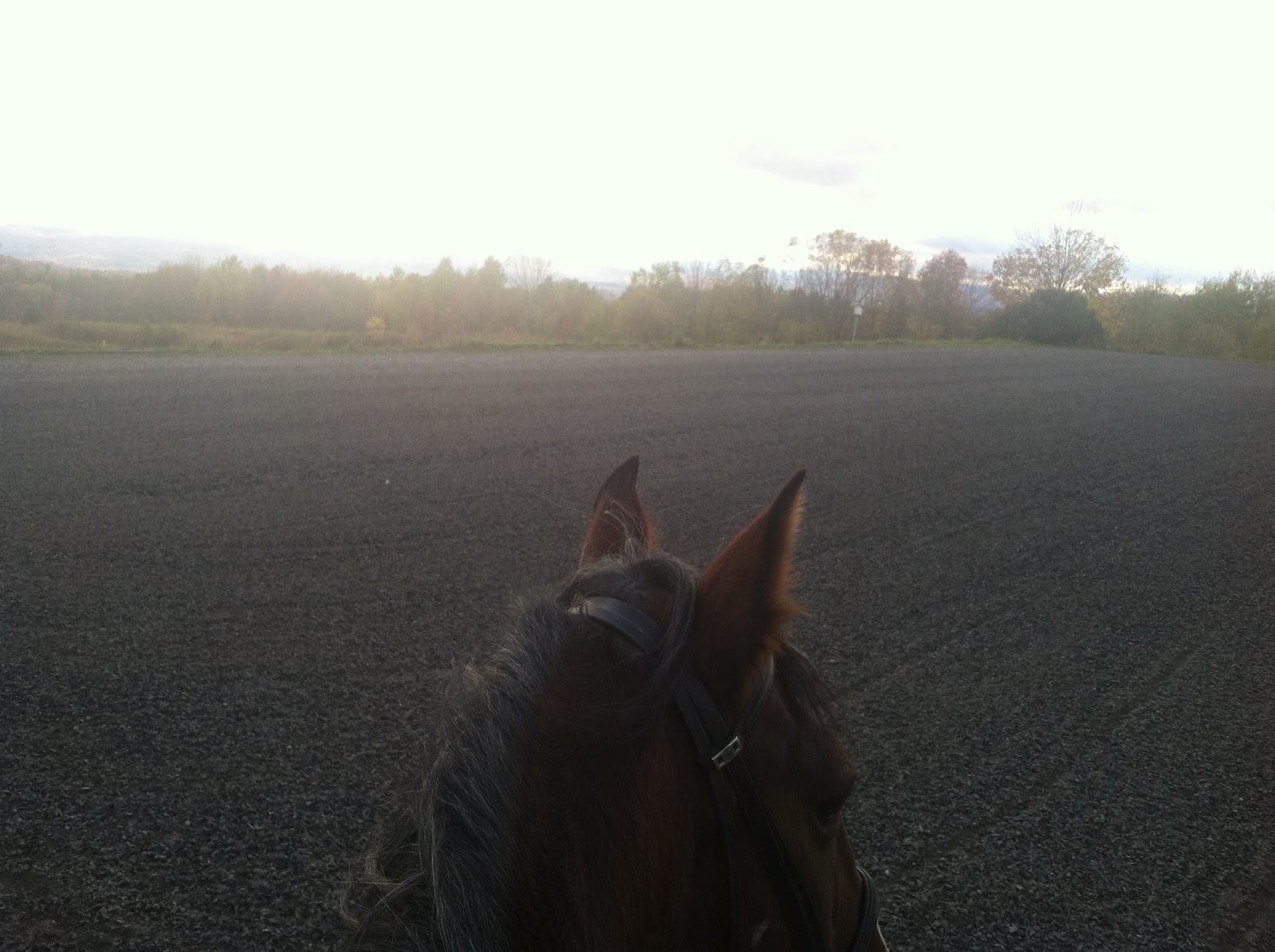 So after about 25 minutes of walking we did a solid 20 minutes of trot dressage work, mostly getting him even through his hind end and up through his shoulders, keeping him from flinging those massive shoulders every which way and dragging me back to the barn.

The canter work was not great. He was antsy and prancy and I got tense and held him in. No, he won't get a good depart if I've got a death grip on the reins! So I worked hard to hold him in my core and through my seat, not by holding on to his face, and giving a release even when he felt like he wanted to come around the corner, face the barn, and bolt for home.

Afterwards, he was warm and a bit sweaty, so I put him in an irish knit for 20 minutes or so, then switched to his regular fleece cooler, which was what he was going to wear until night check anyway. I went into the tack room, and since I had an hour before I was meeting the fiance for dinner, I settled in to clean some tack, with mixed success. My dressage saddle cleaned up nicely, and I conditioned it thoroughly. The breastplate was filthy, and I could not get the last layers of gunk off some parts. Boooo. I'll do another round soon, I guess. 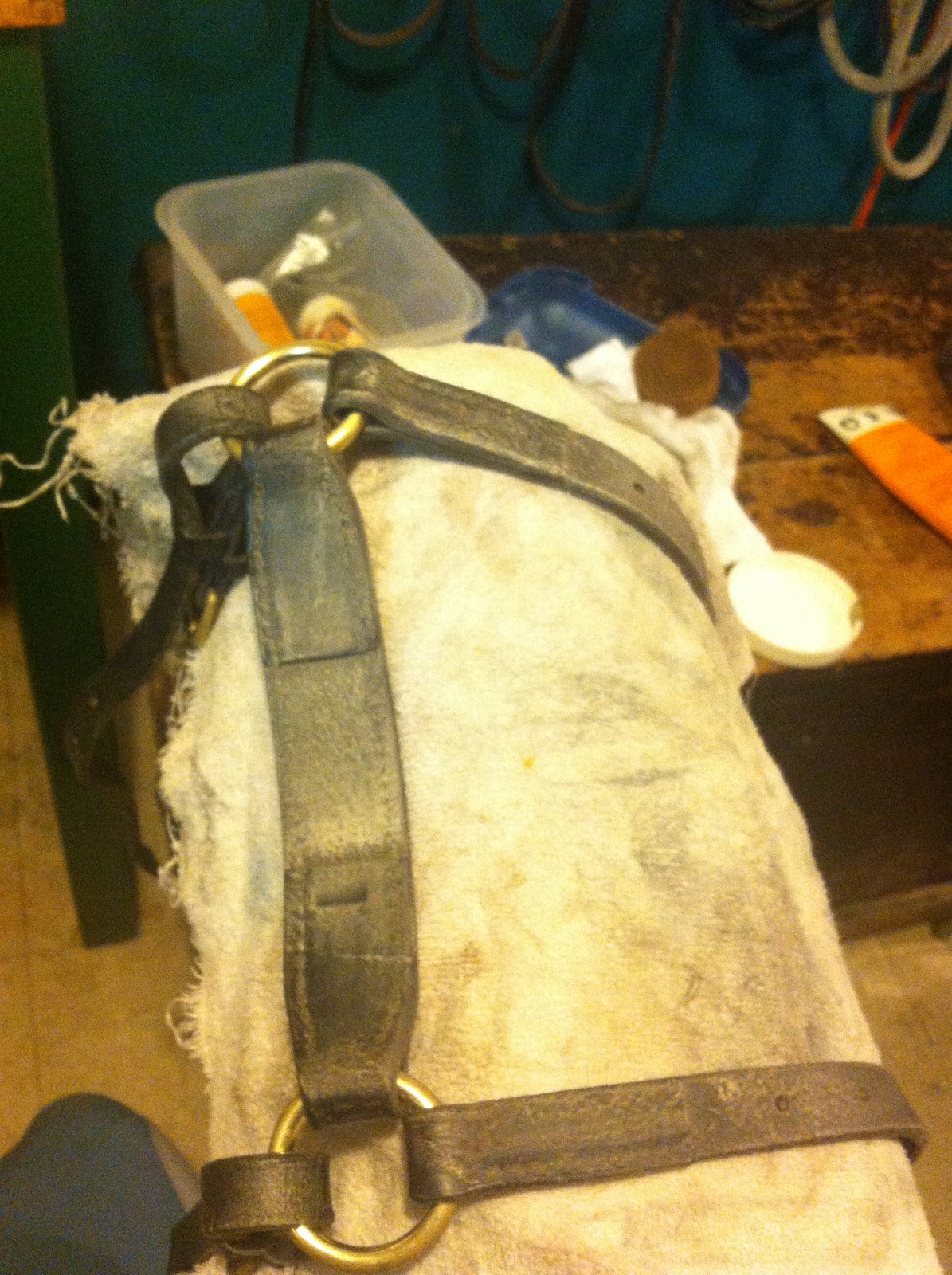 Before I headed out, I stuck my hand inside Tristan's cooler to check on him and see if he could get grained before I left. His chest was still damp and tacky. :( I asked the barn manager to double check, and we decided that he had mostly cooled down with the irish knit, but the cooler raised his body temp again - as it was supposed to, in a way - and the last bit never dried when he warmed up. Next time, leave the knit on longer - or do a layer. Maybe I should've even grabbed his wool sheet from upstairs for a warm wicking layer. Still figuring out the sweaty winter coat thing!