Racing Stripes (2005)
(available to rent or buy at Amazon.com) 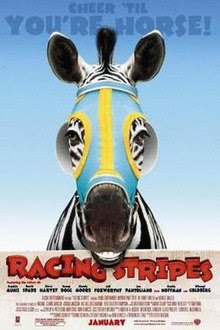 Whoo boy. I hit play thinking why not? This could be good cheesy fun.

I did not expect the sheer level of crack on display in this movie. I stopped counting or making notes of the ridiculous moments less than halfway through. There are just too many. The real heart of the problem, though, is that the movie can't agree on its own internal fantasy logic. Is this horse world or people world? Whyfor are the flies comic relief? Do horses behave like horses or like adolescents in horse clothing? So many questions.

If you haven't heard of this movie, the premise is that a zebra foal falls off the back of a circus truck and is raised on a Kentucky farm adjacent to a racetrack. He grows up thinking he's a racehorse. The father (Captain Pike from the new Star Trek movies, which was a fun little AU imagining for me) and daughter that raise him used to be in the racing business - he was the Best Trainer Ever - until the mother had an accident on a young horse and was killed. They have angst! But not enough angst to prevent them from doing insanely stupid things like, oh, hitching a zebra to a plow when he's never been handled...letting the girl ride him to work when he's never worn a saddle...training him for the Big Race in two weeks using a "gate" made out of two outhouses.

But never mind that. A certain amount of magical realism is inherent in these things. This movie really tries to push it too hard, though. There's the human world, full of human reasons to win the race, and the horse world, complete with moonlight secret races and bizarro sexual politics and never the twain shall meet. Stripes could care less about his people; his people could care less about Stripes.

Anyway. I have a pretty high tolerance for cracktastic horse movies, and this one left me cold, bored, and disdainful rather than even lightly amused.
at 3:00 PM