White Mane (1953)
(available on Netflix streaming, or for purchase on Amazon.com) 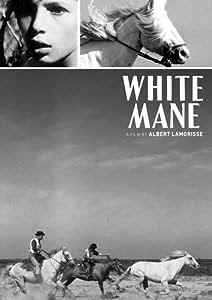 This has been on my Netflix to-watch list for sometime, if only because at some point I did a search for "horse" and added everything I could.

At only 40 minutes, White Mane is a really sweet, lovely movie about a boy who befriends one of the wild horses of the Camargue in southern France. It is 95% without dialogue, and filmed in black and white in a more documentary style. In fact, the only sound at all is a light soundtrack and some sound effects that are more for imaginary effect than realism (a horse galloping through the water does not make the same noises as a person walking through a puddle, I'm just saying.)

It's very, very French, and filled with "don't try this at home, kids" moments - lots of scary, dangerous things done by everyone involved, from horses to kid to wranglers. It's somewhat nonsensical in its portrayal of the main character, the wild stallion White Mane, who is imbued with all the Black Stallion qualities you could hope for.

In the end, though, it is almost compulsively watchable, incredibly gorgeous, and overall has a dreamy, fairy tale feel to it, even through the long chase scenes. I put it on as background while I caught up on some work at home, and couldn't stop watching.

The ending is...ambiguous and somewhat difficult and somewhat sad. If it tells you anything, this film is by the same director as The Red Balloon. You can choose to elevate the entire story to a fairy tale, and believe the narrator about the fate of the boy and his horse; that's what I'd recommend. The whole movie builds toward a more fantastical interpretation of its own events rather than a realistic one, so it works.

Definitely recommended. In fact, if I'd discovered this as a kid it would've been a top 10 for sure.