I've been keeping a bit of a secret, horse blog world. Tristan's odyssey with his feet is no secret, and for the past 2.75 years or so he has been wearing front shoes to help support that RF as it continues to try and grow normally.

Every few months, I've asked the farrier if he thought maybe, this time, Tris could go barefoot? The farrier is not a shoes-at-all-cost guy. He is an excellent farrier whom I have seen praised entirely independently on the COTH forums, and, you know, that NEVER happens.

The last time I asked was this past fall, and when we pulled his shoes as part of that vet visit, the toe still wasn't right, which was discouraging. That was the same vet visit at which we pulled blood to test for Cushings, and that came back positive, and I started hoping that maybe the reason he (still!) wasn't healing 100% was because of the Cushings. I figured I'd ask again in the spring.

Well, two weeks ago, I asked, expecting to get a sigh and a shrug again.

Instead: the farrier pulled off his shoes and was thrilled. My horse had foot again! Proper foot! There was no reason he couldn't go barefoot. To say I was excited was the understatement of the century. 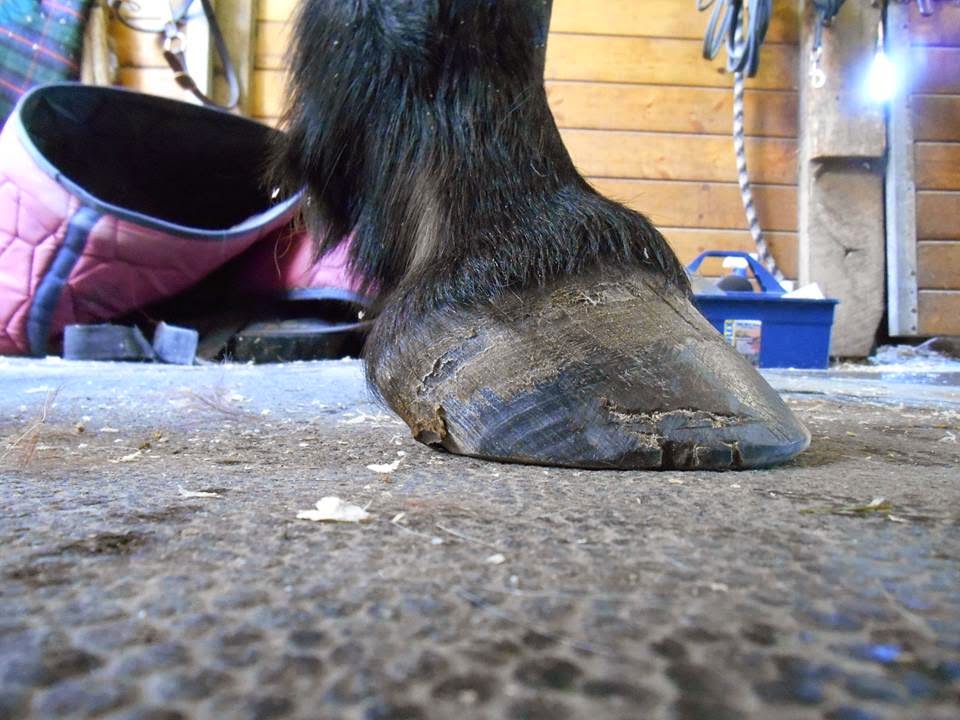 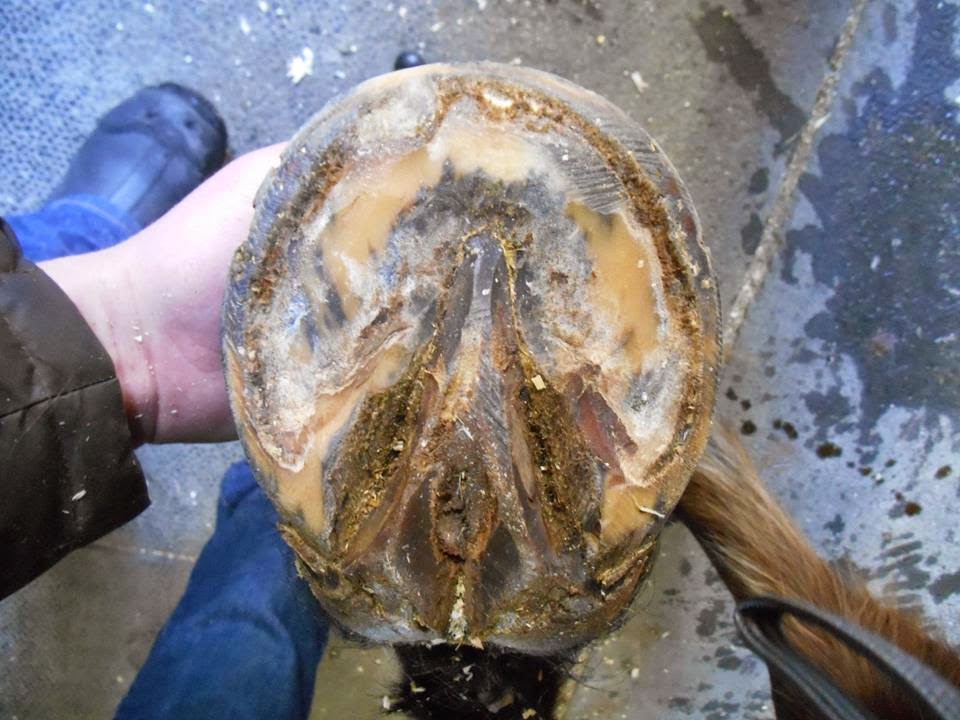 You can still see the abnormality at the toe, interfering with the white line, in the bottom of the foot, but it's entirely possible that will never go away.

Are they perfect? Gosh, no. We've got some work to do on shoring up the heel and rehabbing the sole. In particular, I'm pained by the white line - but I saw the same thing when we pulled his hind shoes, and I know how to fix it. We've already spent quality time with Durasole, and a nice long White Lightning soak is in our near future.

The best part? I gave him a few days off, with some handwalking and long grooming sessions, and he did not look even slightly hesitant when I walked him back and forth, even on the harder aisle. The barn staff confirmed that he wasn't in the slightest bit tender on the pebbly, hard dirt road to get to turnout.

So four days later, I longed him, and he was raring to go, bucking and farting and giving big sweeping trot strides. I longed him again the next day, and when he still looked 100% sound, I got on him. And rode him. And I've been riding him consistently, at the walk and trot and a bit of canter, without a single problem.

On Friday afternoon, I took him out on the dirt roads around the barn, which afforded a great test; they were waterlogged and soft, but not yet gravelly. Harder than the indoor footing for sure, but nowhere near the rock-hard summer roads. He was terrific, and even jigged around a bit.

Seriously, how did he wear shoes for 2.75 years, sustain a major injury + surgery, and then come out of that so beautifully sound? I have to go find some wood to knock on.