Previously, in 2014, I did a quick table of the vaccines that Tristan usually gets. It's changed a lot over the years. 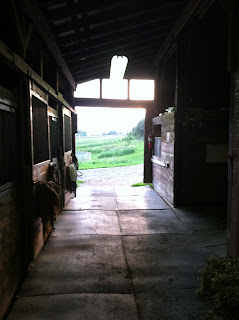 So what did he get this year?

Some things are standard: rabies, flu/rhino, and Eastern/Western/Tetanus, West Nile.

In the past, I noted that he got strangles at the discretion of the vet and the barn. This year, we passed on the strangles vaccine because there's a pregnant mare in the barn, and there were concerns about the live virus vaccination. My barn takes biosecurity very seriously, which is a thing that I appreciate and support, so no strangles until after the foal arrives - and maybe not even then. We won't be traveling much.

Tris will get Potomac and a flu/rhino booster in the fall as usual.

One new development this year is that my vet noted that she now has a Lyme vaccine available, but did not recommend it for Tris this year. We haven't had many ticks in this part of Vermont, and in fact I've never pulled one off Tris at this barn. I have definitely done so at previous barns! I've emailed her and asked for more information, since I didn't realize it was available for horses yet.

Last year, Tris had some mild reactions to his vaccines, and this year the vet gave him some banamine alongside his vaccines. He was still quite sluggish for our ride the next night. An interesting new development for him, as he'd never previously been a horse to react in any way - even having all his vaccines on the same day with zero stiffness in his neck. Age, I guess!

Are you opting for anything different in terms of vaccination this year?

Email ThisBlogThis!Share to TwitterShare to FacebookShare to Pinterest
Labels: adventures with the vet