Continuing in the exciting adventures of getting bathroom vent fans into our house: the upstairs bathroom.

The idea was that this would be much  more straightforward. The vent fan itself was already in the ceiling, put there by my father when we rewired the house. It just needed the venting itself. The theory was we would just pull up the floor and run the vent straight out underneath the attic floorboards. 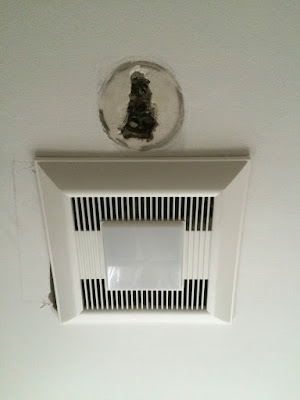 That theory was wrong. See, our house is built in the Dutch Colonial Style, which means it has these charming features like a gabled roof, and all sorts of extra little flourishes to that roof.

Going straight out the attic floorboard meant we would be in precisely the wrong spot: coming out the corner of the roof. On the entire huge side of that house, we were 4" too far toward the front.

We of course did not discover this until we had cut up allllllll the floorboards along that line. Sigh.

Eventual solution: come up and over the floorboards, angle back toward the center of the house just one bay, and then go out the side of the house.

So, yeah. It looks kind of awful. Really not my favorite. But, the longterm plans are to build a kneeboard when we sheetrock the attic. It will just look like a finished space and you will never know the venting is behind it. And I suppose it's a small price to pay for not having bathroom moisture destroy the house.