Explain to me: fly bonnets?

We are finally entering serious bug season here in Vermont. (Though, it has been getting into the low 40s and high 30s at night, so maybe that will ease off again.)

Once upon a time, Tristan wore a fly bonnet for every outdoor ride. See, when bugs land on his face, he loses his little mind. He flings his head in every possible direction. He snorts. He prances. He shakes and shakes and shakes.

He is remarkably tolerant of me using a dressage whip to flick them off, so that's often what I do, along with riding when the bugs are less, or inside, or just sucking it up.

(I just looked and looked and can't find a photo of Tris in his fly bonnet, so you will have to take my word for this.)

Relatively quickly into every ride with it, he gives a really good long shake, and it flies off, usually falling forward over his eyes. Thankfully, he doesn't care all that much, but it's next to impossible to get back into place from the saddle, and then it's even more dislodged, and stays an even shorter period of time, etc.

It's a cheap basic fly bonnet that I probably bought at Dover Saddlery at least 10 years ago, before they were all cool. White, with cotton fabric ears and crocheted cotton headpiece. It has tassels that used to be longer before someone trimmed them, something about they were hanging in his eyes and looked terrible. :P 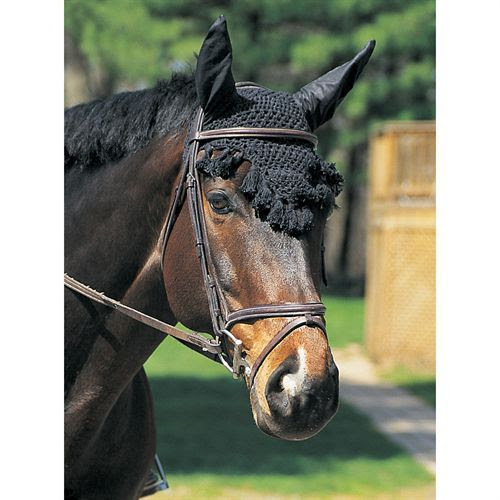 This one, in white.

What am I doing wrong? Is Tristan just not meant to be one of the cool kids who can accessorize with a fly bonnet? Is it a fit problem?
at 11:08 AM

Email ThisBlogThis!Share to TwitterShare to FacebookShare to Pinterest
Labels: fashion