How my horse says fuck you

Tristan is a very good communicator.

He's more perceptive of body language - both of horses and people - than many horses I've known. He makes his preferences very clear, both on the ground and under the saddle. He has a remarkably expressive face that can convey a wide range of emotion in just a few seconds.

Here's one of the ways Tristan says "fuck you, mom." 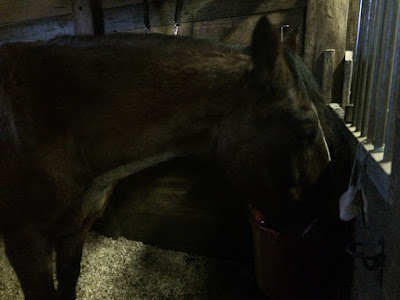 Yes, that is a picture of my horse drinking water.

Tristan is fully aware that I will never, ever pull him away from water. He's not a great drinker, and he has a colic history. I keep a very close eye on his water intake, and have a very firm rule: if he's drinking, I do not touch him.

It started on trails: he would drop his head and slurp from whatever puddle or stream was nearby. Ok, fine: he grew up in the desert, and he took advantage of every possible opportunity.

But then it started happening in his stall, in very specific instances. Sometimes I'd put his bridle on him and start to lead him out of his stall. He'd pause by his water bucket, then start drinking. And keep drinking. And drinking.

Sometimes he'd flick an ear and turn an eye toward me, very clearly saying, "Yup, I know you're waiting. That's the idea." Sometimes he'd pick his head all the way out of his water bucket, and I'd ask him to walk on, and he'd shove his head back in the water bucket. He'll drain half the bucket that way.

Last night, we had a terrific ride - a good, hard 50 minutes, with quality work interspersed with lots of walk breaks during which we practiced turning corners, serpentines, and lateral work. In the trot we worked on consistency in the bit over trot poles. In the canter we worked on going from straight long sides to circles on the bend, while keeping his head down and driving from the hind end. He was terrific. He was very, very tired. 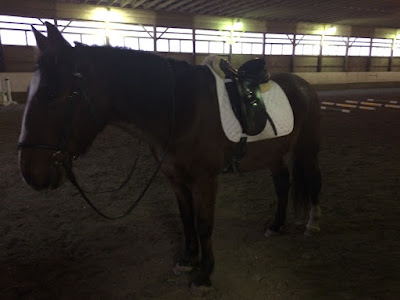 So I put him back in his stall, and went back out to get his cooler to hang out while I put tack away. He wasn't overly warm, but he was not cool yet, and it was just cold enough I didn't think naked was the way to go.

He picked his head up and put it back in the water bucket several times, each time looking at me while I stood holding his cooler and waiting.

Then he finally stepped back, walked over to me, and shoved his head through the neck hole of the cooler and let me put it on him.

I have never known any other horse who more clearly needs to have at least the illusion of control over everything he does. He needs to be able to tell me to fuck off, then make his own decision about what's going to happen next. He has been exactly this way since day one, ten years now. Probably he was that way before he was mine and a domestic horse. It never ceases to amaze and amuse me.
at 9:50 AM