Eating crow and why the internet is awesome

I am really pleased with the way Tristan is going right now. He's really sound, he's working well, and he is getting slowly but surely more fit. After a long and tough ride on Monday, he was quite tired but his vital signs returned to baseline much more quickly than they have before.

I'm working mostly on a day on, day off schedule to ramp up work and then give him time to rest. He's always been a horse that has benefited mentally and physically from rest days. On days when I am out there back to back, I do another kind of work with him - I longe or we hack out.

He's still very slow to build muscle. The Cushings has just really gone after that part of his metabolism, for whatever reason. It's been a solid six weeks of very good work now and I'm only seeing the most incremental changes in his body. Physically, he feels like he should have more muscle than he does. I'm not sure what to do with that yet.

On Monday, I took some photos to show how his neck is developing basic muscle, and also to show how far we have to go. 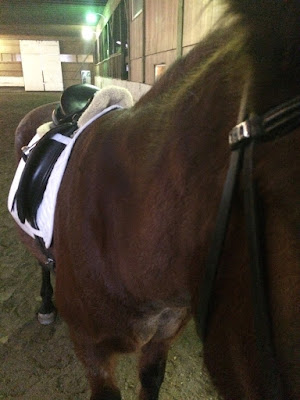 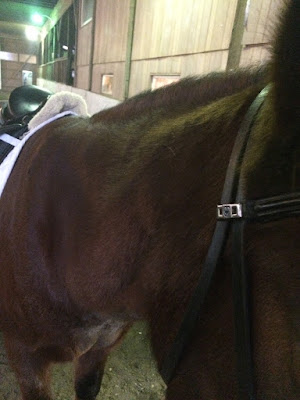 As always, it does look better in person, but you can see some things. His crest is doing better, and he's filling in just in front of his shoulder a bit.

There's a problem, though. I couldn't quite figure it out until I read Jenj's recent blog post and put two and two together.

Can you see it now? 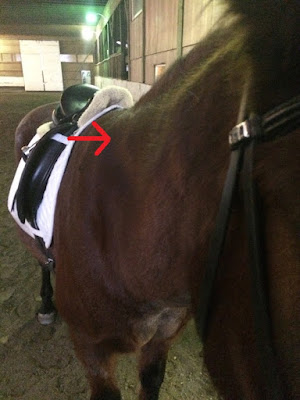 Yeah. He's developing a funny muscle bump in response to the way I've been asking him to bend. Exactly as described in Jenj's blog post.

Knowing is half the battle, right? Back to boot camp for both of us.
at 10:00 AM