Horses were part of warfare even before we were riding them. Before the first kid threw a leg astride, horses were driven; before that, they were used as meat.

Here are a few horses that have been in military service over the years. This is by no means a comprehensive list. 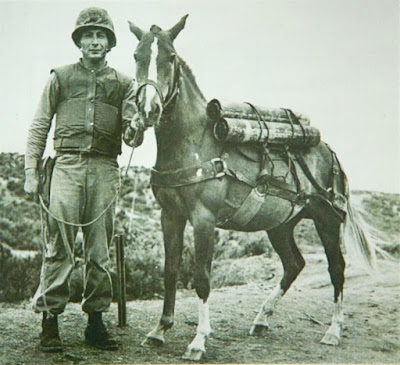 Reckless was a part-Thoroughbred mare who served with the United States Marine Corps in the Korean War as a supply horse. She performed some truly extraordinary feats of bravery and actually held rank as a Sergeant in the USMC. She also received two Purple Hearts. 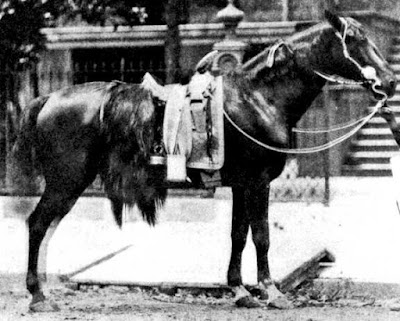 Rienzi was a black Morgan ridden by Union General Philip Sheridan during the American Civil War. Sheridan was the Union's top cavalry officer, and Rienzi his favorite mount. Rienzi was renamed Winchester after he performed extraordinary feats of endurance and strength on "Sheridan's Ride," a famous overland cavalry ride that brought Sheridan's troops to the Battle of Shenandoah in time to win. Rienzi features prominently in a famous poem written about that ride:

Rienzi/Winchester was so famous that he was mounted and today can be seen in the Smithsonian. 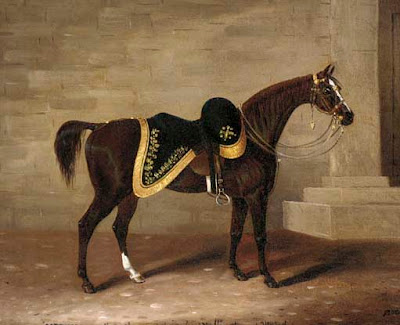 Copenhagen was, you could argue, the original OTTB success story. He was extremely well bred and raced until he was four years old, and was then sold as a riding mount. He was eventually given to Arthur Wellesley, the first Duke of Wellington, and became his primary battle mount. Copenhagen carried Wellington, most famously, for 17 continuous hours during the Battle of Waterloo in 1815. Supposedly Wellington dismounted at the end of the battle, patted Copenhagen's flank in thanks, and the gelding let fly with a hind leg, narrowly missing bashing the general's face in. Copenhagen was Wellington's mount for the remainder of the Napoleonic Wars and then his parade mount afterwards, and became so famous that his hair was a coveted accessory and was made into jewelry.
at 11:00 AM