What to expect from a chiropractic appointment?

First, he's tracking up evenly behind for the first time in a very long time. Years, perhaps. I actually trotted him out for the vet this spring to see if she had anything to say about it. She thought it was perhaps some arthritis but mostly weakness and over-protecting. So I focused hard on getting both hind legs to step under in all of our work, and I stepped up our time on hills. It seems like that's been successful!

Second, less positive, I'm hearing a popping sound from behind the saddle. Now: Tristan's front legs have snap-crackle-popped for years when I lift them to pick up his feet. His joints just seem prone to air bubbles (apparently what that noise is) and it's never directly correlated to weakness or pain. Multiple vets and the internet have told me it's not a symptom in and of itself. I think it's lower back, but it could be stifle.

However, he's also been more sour in his warmup lately. Even as he's tracking up better, reaching better, using his back better, he's also stiffer through his warmup. More flailing. More reluctance to trot initially, and that's a rock and a hard place for me: if I don't push him to be forward right from the first step, I never get it. So when I push him to be forward, he's unhappy but it results in a better ride after the warmup; when I let him shuffle along slowly until he's more responsive, it's a shit ride from start to end but at least he's a bit happier at the beginning. 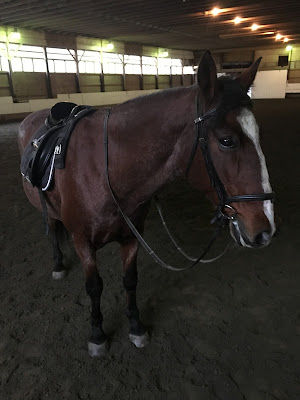 the goober in question after a recent dressage ride


Anyway, this is a long way of saying that I have finally pulled the trigger on something I've thought about for a while now: scheduling a chiropractic assessment and adjustment. Vet is coming out tomorrow.

I've never had it done before. I haven't had time to properly research it. I just know that a) it's helped me a lot in the past b) a lot of people in blogland swear by it and c) the ways in which he is exhibiting sourness make me think it's not a muscle soreness but a stiffness.

So, I crowdsource this: what should I expect? He's generally stoic about pain; will he be too sore to ride after the appointment? Have you seen a huge difference in your horses, or no difference? Anyone with senior horses who uses chiro? Anything I should make sure to ask or discuss with the vet?

Obviously this will all be a conversation with the vet tomorrow too, but I'm fiddling my thumbs anxiously and hoping I've done the right thing so would like some opinions before we talk!
at 10:37 AM

Email ThisBlogThis!Share to TwitterShare to FacebookShare to Pinterest
Labels: adventures with the vet