Things that were probably not a good idea...

...though I guess they got away with it? 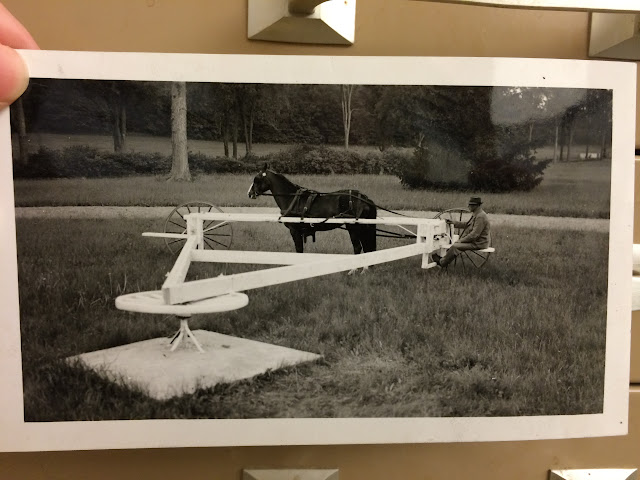 So let's break this down.

This is a photograph taken for a promotional pamphlet about training at the US Government Morgan Horse Farm in Weybridge, VT. At that time, it was the cavalry remount station for the northeast, breeding primarily Morgans but also some other horses: Thoroughbreds, mostly. Their goal was to breed for the cavalry but also to research horsemanship as an outpost of the US Department of Agriculture. The photo was probably taken c. 1920 - 1925.

That is horse harnessed to a box made out of 2x4 boards with wagon wheels on the outside. The man sitting behind is holding reins which presumably are just for whoa and go, since the box is attached to a pivot point in the center. Scale is tough, but let's say it's a 20m circle.

HOW WAS THAT A GOOD IDEA?

I mean: I freely admit that driving makes me a bit nervous because of the potential for wrecks. In fact, the day I took this photograph I was researching in the archives of the National Museum of the Morgan Horse; for lunch, I got a sandwich and went over to Weybridge to eat at a picnic table at the Morgan Horse Farm. The current director of the farm was schooling a young horse in a cart on their wide front lawn, and said young horse gave a perfect demonstration of what it's like to train a high strung, fractious, young horse to drive. He was beautifully handled and it worked out but man, would I much rather have been in the saddle for some of those moments. Hats off to the driver, who was calm and professional and ballsy as hell.

But doing that while you're trapped in a 2x4 box? Not to mention this is pretty clearly not a permanent installation. No way is that flat platform bolted down to the ground. I've seen other pictures of the area where it is and it's a wide grass field. So if the horse went sideways, that sucker's getting dragged with him

Honestly, the longer I look at it and think through all the implications the worse it gets.