The new love of my life

As in, I almost certainly love this thing more than my husband right now. (Though probably not more than the dog.)

Tristan has been a challenging ride this spring. Probably not in the grand scheme of things, and not for a rider with actual physical fitness and skills, but he has for me. He's been throwing bucking fits on simple hill walks. He's been bolting for home. He's been jigging constantly and fretting himself into a frenzy.

I pulled out the big guns. This behavior is not new. It simply has not occurred in many, many years - seven or eight, to be precise.

See, when Tristan was first learning about riding in the open, he was equally awful (worse, in some ways). I was not nearly as good a rider but I had a certain stickability. He never dumped me, but it wasn't a lot of fun either. 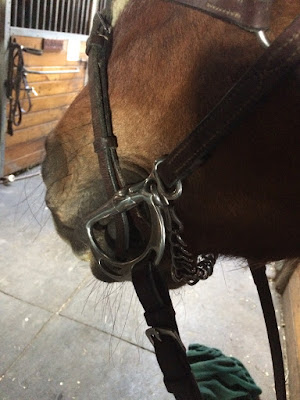 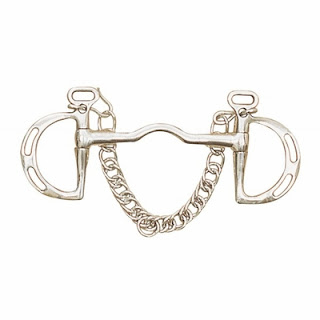 You can see that the mouthpiece itself also has a low port.

Let me be clear: this is not a subtle bit. This is a bit that says WHOA THE FUCK DOWN RIGHT FUCKING NOW when it is applied firmly.

It is also, however, a relatively stable bit. Depending on how you adjust the curb chain, it never kicks in. If you attach the reins as I have above, it - and the port on the mouthpiece - only kick in when you really need them to.

Here's what the lower attachment looks like, putting this bit closer to a pelham in action (not on Tristan, random internet horse): 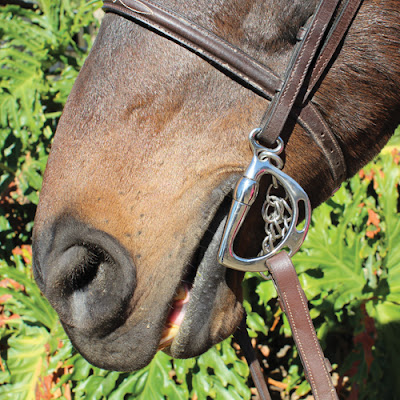 All of that together means that this is a bit that is relatively inert and stable until it is not. Which means that you can ride in it with quiet, steady hands and have a simple, straightforward go. If you have a horse that likes a mullen mouth bit, you can use it for some dressage work - softening, etc.

Tristan tends to prefer double-jointed bits, so I never had much hope that this would really lead to quality dressage work. What I wanted was to regain some of his respect for me when riding outdoors.

I still remember, with perfect clarity, the first time this bit kicked in. I had taken Tristan out to a field behind an old barn and we were simply walking around a bit. He reared, spun, bucked a few times, and bolted for home. He had done the exact same thing the previous day, and I had not been able to stop him; he jumped two ditches, I lost both stirrups, it sucked an awful lot. (I hadn't yet learned an effective one rein stop, that's how inexperienced I was with that sort of thing. I learned later.)

But on that day, three strides into the bolt, I hauled on the reins - not with any sort of tact or subtlety. I just hauled. He stopped cold. Mid-stride. Stock still. He was utterly and completely horrified. He walked politely home, completely mystified as to what had happened to him. It was a truly glorious moment.

From that day on, he went in his kimberwicke for all outside endeavours, for about two more years. Eventually, it started backing him off too much - he didn't need it. We moved to a full cheek snaffle for jumping and cross-country, and hacked in his regular loose ring.

When I was casting about for ways to work with Tristan on his new misbehavior, I resisted pulling out the kimberwicke; it felt a little bit like failure, or regression. Eventually, I accepted that feeling and pulled it out.

The first day I rode in it was the day of my photo session with Emilie. It was also his first ride in the outdoor dressage arena. He was not thrilled at the walk, and picked up an uneasy trot, and then when we turned to the short stride at the far end, as soon as we passed A, he was OFF.

I simply sat deep, put my hands down firmly, and let him run into the bit himself. I was perfectly quiet and calm. He did not stop mid-stride, but he did immediately drop to a polite walk, tossed his head once or twice, and then licked and chewed.

For the next few minutes, he was a little unhappy, but he was at least polite. I kept steady, quiet hands, asking him simply to trot without flailing. Then I pushed him a little bit, asking him for some actual softening - but not expecting it. And he gave it to me! 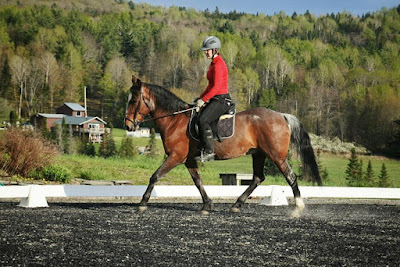 Two days ago, we went back up to the outdoor ring, again in the kimberwicke. He never even thought about bolting in the trot. I asked for a canter. He completely exploded - for a stride and a half. Then the same thing happened. Back to a polite walk, a few minutes of disgruntlement, and then we had an actual productive ride, working on geometry and putting together pieces of the test.

At about the 40 minute mark, I asked for a canter to the left, our trickier direction, and he gave me a polite, obedient, and straightforward - if very backed off - 20m circle in the canter. I brought him back to a walk, dropped the reins, and praised him to the skies.

Now, to figure out whether to a) technically bend the rules and ride in the kimberwicke for our schooling show or b) somehow make the transition to the snaffle again and hope that he behaves even in a show atmosphere...
at 10:01 AM