This will be a very much in-progress kind of post, but let it serve as a marker. I'm slowly chipping away at solving our basement storage.

When we first moved in, the basement was the dumping ground. Which made total sense at the time, and I don't regret it. But going down there was an exercise in claustrophobia and anxiety - at least for me, considering the contentment I get out of well-organized spaces with everything in its right place.

But over the winter and the last few weeks, we've slowly chipped away at that: emptying boxes and getting their contents put away, thinking through what should go where, buying new storage containers to actually organize things that would stay in the basement.

Several weeks ago, when we had friends staying with us (the same ones who stripped our wallpaper), I enlisted their help to move the giant shelving unit that sat just at the base of the stairs.

By giant, I mean probably 20' long, 5' deep, and about 4.5' tall. That meant that it was basically too big to be usable for us. I'm honestly not sure what previous owners used it for - storage of things they never wanted to see again? For us, it just attracted clutter. I think the longterm plan will be to dismantle it and take it to the dump, but I can't bring myself to do that quite yet.

So anyway: the shelving unit got shoved right. 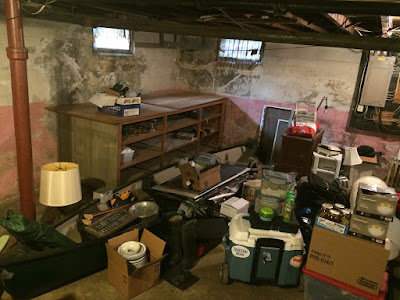 Most of what's on the floor was either a) on top of that shelving unit and moved so we could pick it up or b) has since been sent to its appropriate home. But it gives you a taste of what our basement was like and why I wanted to organize it! 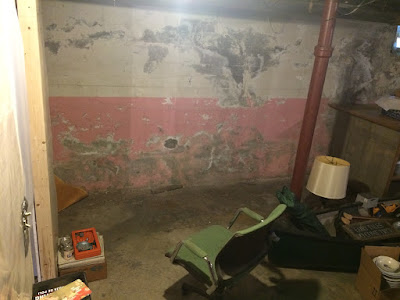 Here's the space that was left. This was taken standing at the very foot of the stairs. You can see the wall of the new garage on the left. 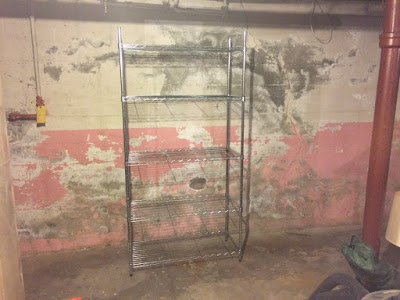 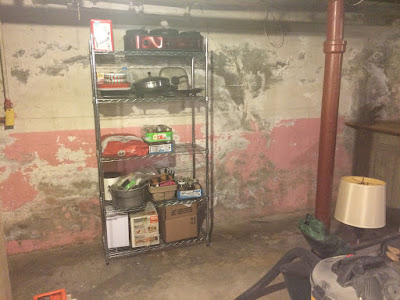 And voila! New shelving with surplus kitchen things on it. It's easy to run down and grab less frequently used things (canning supplies, old dishes, the large crockpot for entertaining).

One of my someday dream frivolous projects is to pull everything away from the walls and have them sandblasted and then repainted all white. As you can see, our whole basement was painted white and pink and since that time (the 1970s?) moisture has seriously eroded the paint, which flakes away horribly if you so much as look at the wall. I used the shopvac on the wall before putting the shelving in (you can see the difference in paint between the empty pic and the shelving pic) but it just didn't do enough. It got the major chunks, but that's it.

There's more storage stuff going on in other parts of the basement, slowly but surely turning it into a better space. Some problems haven't been resolved yet (see the canoe in the top picture? yeah.) but many of them have, and if I just keep chipping away I think by this time next year it'll be all set.
at 12:00 PM