The best Christmas present ever, that sadly wasn't

I have a very belated story to tell, partly because it is ultimately a sad story.

For Christmas, my husband hinted that he was so excited because he had found the best present ever. He consulted friends. He searched the breadth of the internet. He ordered me to stay at the barn late on the day it arrived. He placed it in my lap on Christmas and waited, breathless and excited. 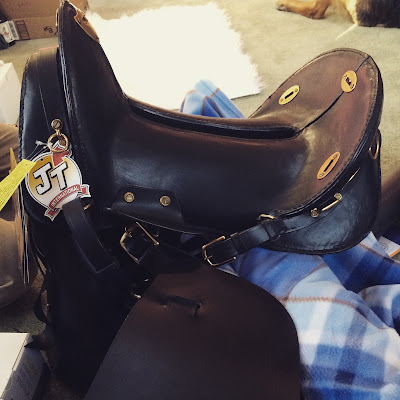 And lo, it was in fact the best Christmas present ever.

I was in total numb shock, so deliriously excited.

If you don't know what you're looking at, that is a modern replica of the famous McClellan cavalry saddle, first developed by the Civil War general of the same name.

It was the perfect nexus between my horse geekery and my history geekery. I loved it.

But I knew right away to temper that excitement, and you, dear reader, are probably nodding your head along as you sigh in sadness.

I simultaneously reassured my husband that this was indeed an AMAZING Christmas gift, stupendously thoughtful and something that I have long coveted but would never have bought for myself.

But it would need to fit my horse. 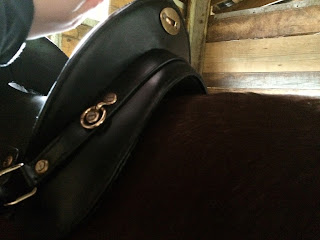 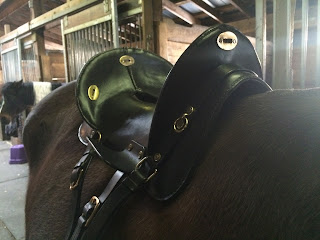 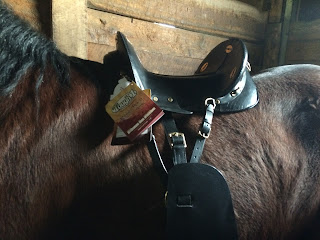 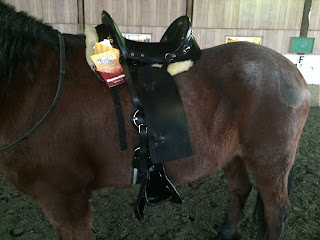 Regardless of the ill fit and the very strict return policy, I put a half pad under it and rigged it up for one ride.

It felt weird and wonderful. It made me sit up straighter and ride with a longer leg and more open hip than any other saddle I've ever ridden in...and it was also exquisitely uncomfortable. In a way that's really tough to describe. It wasn't that it was hard as a rock, though it was. It wasn't that it was sort of weirdly evenly narrow. It wasn't that I'm just not used to riding in a saddle with such a high pommel and cantle.

It just felt so completely and utterly different from any saddle I've ever sat in. I loved it. I wished desperately that I dared trot, but the fit was so bad that I didn't.

So, I got off after two laps around the arena, carefully wiped down the saddle, put it back in the box, took it to the UPS store, and sent it back.

That was a solid three months ago, and I'm still sad, looking at these pictures. I wish it had worked.
at 10:00 AM