Digital Cartoon of Tristan by Emilie of because pony

So a little while ago, Emilie of because pony offered up a killer deal on her digital cartoons of horses in honor of Abercrombie's birthday.

I suppose this is the part where, surprise! I sort of spring it on you, blogosphere, that Emilie has been working at my barn for...um a while now. She is just as awesome in person as she is on her blog, random coincidence that it was that she ended up at our little barn in Vermont! (Ok, not so random, but aaaaaaanyway. I am the best at awkward after-the-fact revelations.)

(oh and Abercrombie is cuter in person than he is in pictures. true story.)

To pick up the rambly thread: I jumped at the chance to get a digital cartoon from someone who probably spends more time with my horse than I do and knows his mannerisms and his goofy faces. 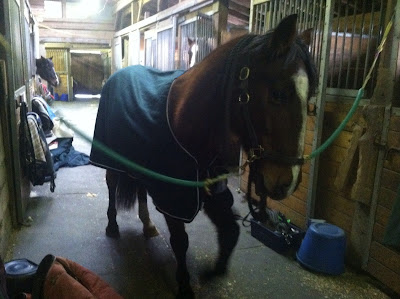 one of approximately 8 million pictures of him doing this

And then she took it from there, and LO IT IS AMAZING AND I LOVE IT. 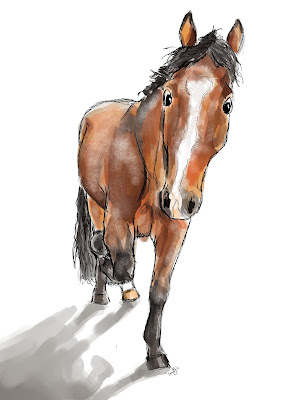 Tristan doesn't always photograph well, and I've always had this hope that his personality would come through more in art, and this proves me right! Which is going to be a dangerous discovery because now I want more and more and more.

(proof: I showed the image to my husband with zero prep or advance explanation and he laughed for several minutes straight and then finally said "that is the most Tristan-like thing I've ever seen!"

You, too, should order one because <3. Check out the commission form on her website! (Oh and follow her blog, of course, and her Facebook page.)
at 10:00 AM