On the surface, this movie is a melodramatic schlockfest in which Bette Davis reaches hysterical heights on a regular basis. It's considered a classic of its type.

Look deeper, and you see a darn good horse movie. Judith's life is consumed by her horses, though the movie can never quite decide what she does with them - steeplechases? hunters? jumpers? saddleseat? She breeds and has a personal trainer and rides herself. Some of the key scenes in the film are set in stables, with really wonderful set dressing.

Judith's horse Challenger is a central character in the movie, and a metaphor for Judith throughout. Trainer Michael (and oh, I could write an entire essay on Humphrey Bogart's terrible Irish accent) doesn't think the horse will ever amount to anything. Judith is convinced he's a champion. It's while taking him over fences at the beginning of the movie that she falls and is first diagnosed with her brain tumor. Michael brings Challenger to her bedroom while she's recovering, and his eventual admission that Challenger is a champion after all is another metaphor for Judith's acceptance of her diagnosis toward the end of the movie. 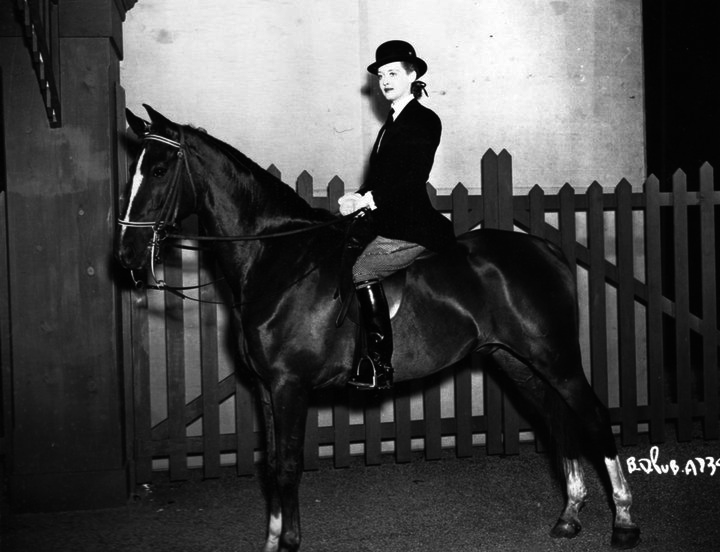 Throughout, Bette Davis wears fabulous 1930s riding clothes, and the horses are just gorgeous. It's not your typical "rich people ride horses" movie; horses and horse sport are clearly central to Judith's character. When she imagines a long life it includes a big house, a farm, and generations of horses in the fields.

Incidentally, Bette Davis herself was something of a horse person, though perhaps not as deeply involved with the sport as her co-star in this film, Ronald Reagan, or other stars like Carole Lombard and Clark Gable. She renovated a home in New Hampshire named Butternut, and kept a horse there for her time off from moviemaking. I've also found mentions of horses she kept for her daughter as well.

Definitely recommended if you like classic film, and classic horse scenes.
at 11:00 AM