Though I have not been blogging, things are still going on. I've wanted to construct raised beds for gardening for some time now; last summer, I stuck to container gardening in Tristan's old supplement buckets on our porch. That worked okay - I got some good tomatoes out of it, but it was less than ideal.

So for this summer, I went off into the deep end, of course. 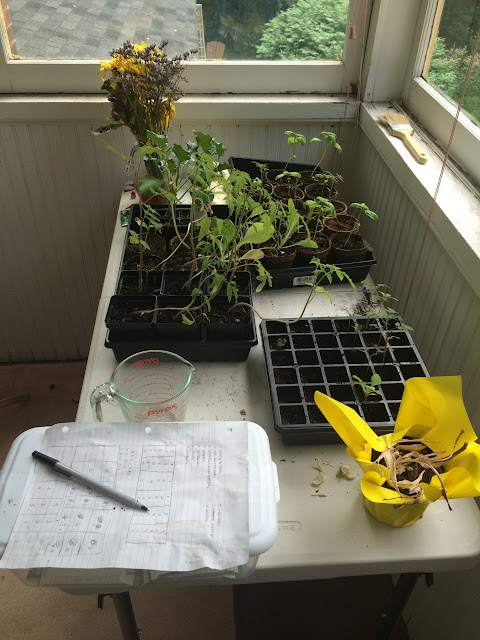 I started almost everything I grew from seed. I bought High Mowing seeds from the local coop, because Vermont. They're organic and mostly heirloom varieties. I had never started anything from seed before, so it was an adventure. Here they are on the sleeping porch, after spending the colder months (March, April) in the library next to the window. I didn't use a grow lamp, just a little greenhouse thingy with a plastic cover to trap heat and moisture. I was continually surprised by what sprouted when, and how that has not necessarily correlated to what's doing well now. I have absolutely no scientific evaluation of any of this. Just watching them and shrugging a lot.

Two exceptions to starting from seed. First, broccoli, because there was a mixup at High Mowing and what was in the broccoli packet I bought was actually cabbage. To atone for that, the coop gave me another packet of broccoli seeds, a packet of any seeds of my choosing, AND a flat of Cate Farm (also local, also organic, VERMONT) broccoli seedlings. Since it was awfully late to be starting anything, I just planted the broccoli seedlings and set aside the seeds for next year.

The other exception to growing from seeds was peppers. Nothing I could do would make them grow at anything beyond a sluggish rate. They took weeks and weeks to come up, and then they just never thrived. So I bought two pepper plants and put those in the ground instead. They're still not doing great. I'm not entirely sure what's going wrong.

Now to the actual raised bed! 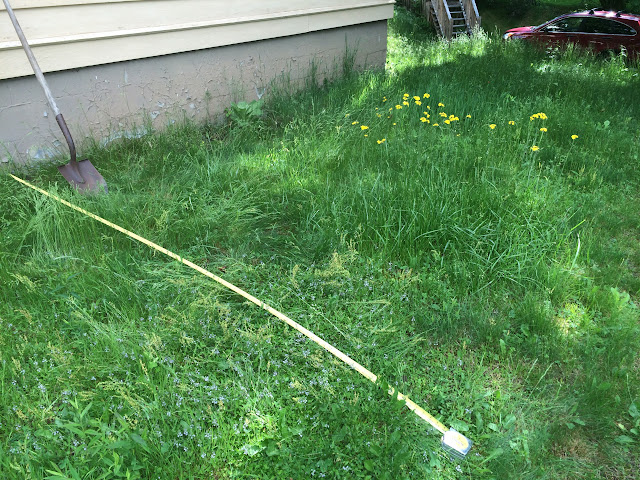 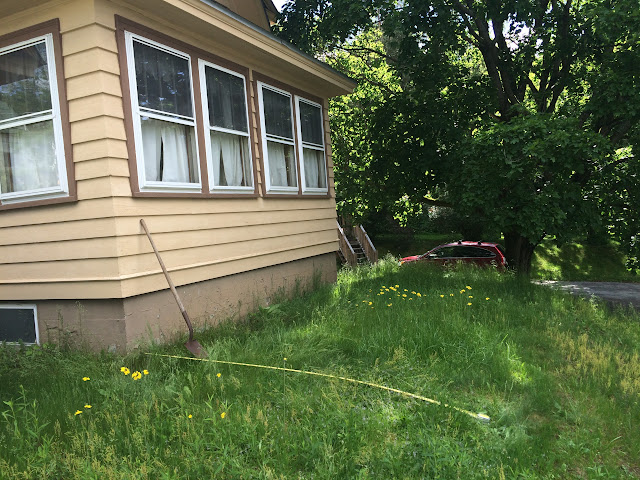 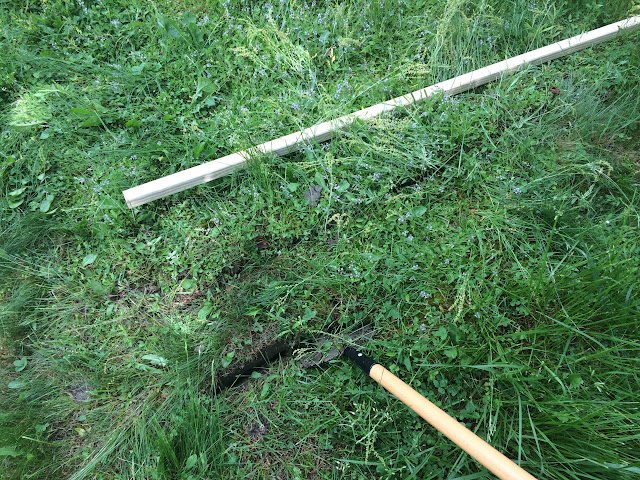 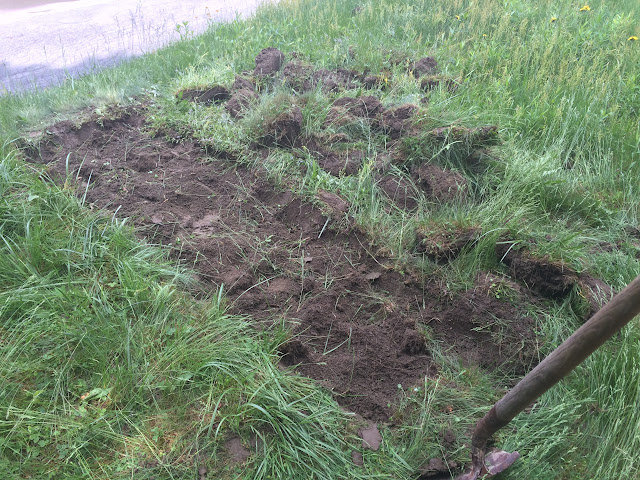 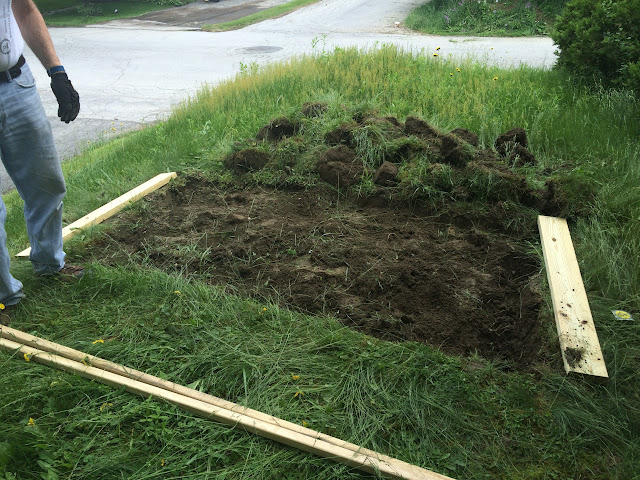 Step 1 was to site the bed: this is at the south end of the house, on a very steep hill, just outside of the sunroom. It gets the most sun exposure - much more than the backyard - and drains well. The grass is crap anyway, and tough to mow. The longterm plan is actually to terrace this entire hill but that's a few years away probably.

So I cut up the sod and dug it out. This was physical labor but not nearly as bad as it could've been. It took maybe an hour to an hour and a half. It was just slow steady work. The sod was of good quality and the soil was too, and I had the right tools. 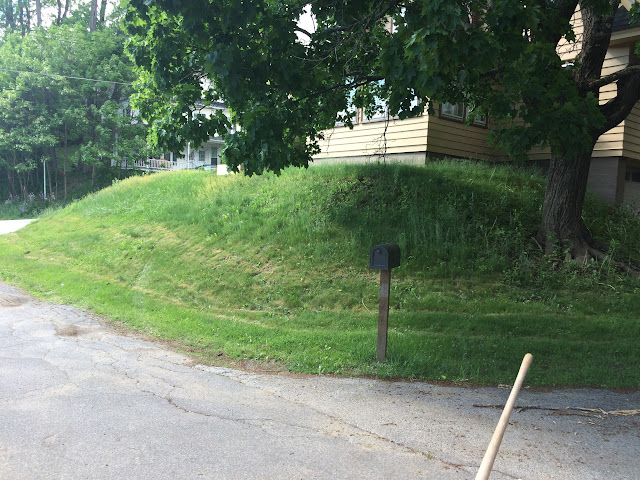 Yeah, see how steep and awful it is? 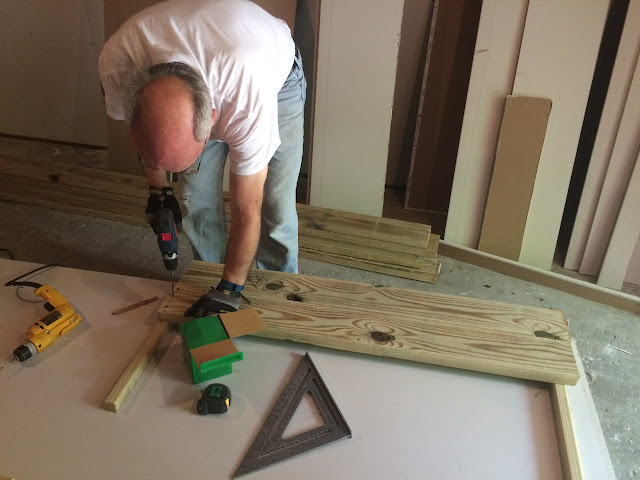 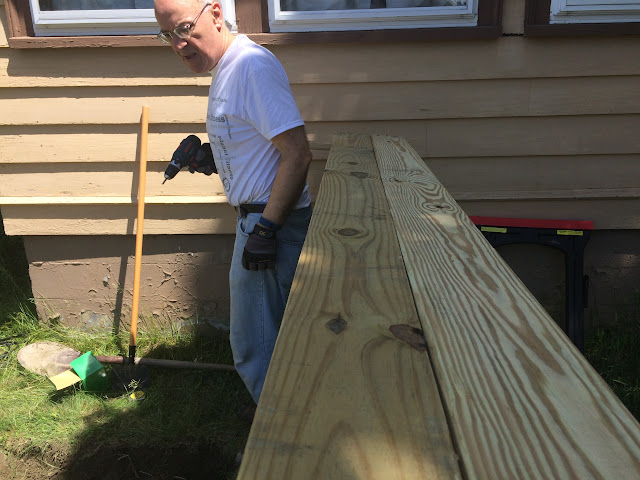 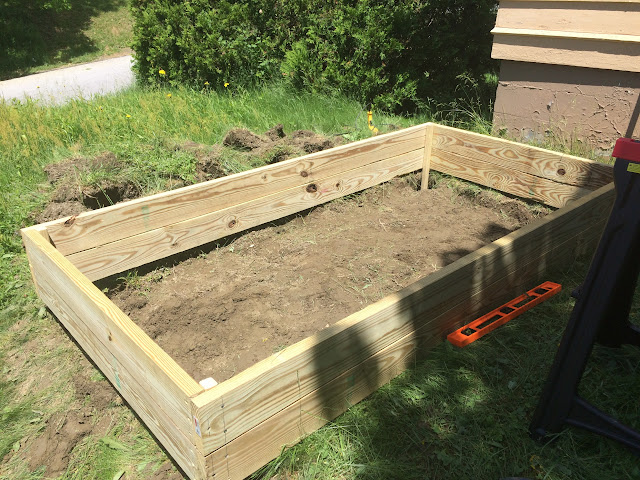 Step 2 was to build the raised bed itself, and get it mostly level. I priced out cedar and hemlock, and went with pressure-treated pine instead. These are 2x6" boards, with 2x2" braced posts at the corner, dug 12" deep into the ground. The whole structure was incredibly heavy and pretty darn sturdy. It's not the prettiest, but I'm looking forward to it weathering up (it's already started) and silvering and generally blending in much more to the hillside.

(as seen in pictures I can take little to no credit for the very careful measuring and squaring up of all the parts. that was all my father the engineer. I probably would've just started screwing things together and then despaired when it was too hodgepodge to stay flat or survive the summer.) 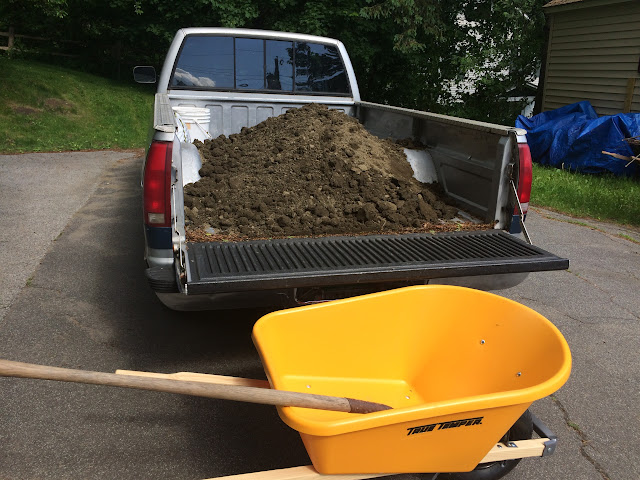 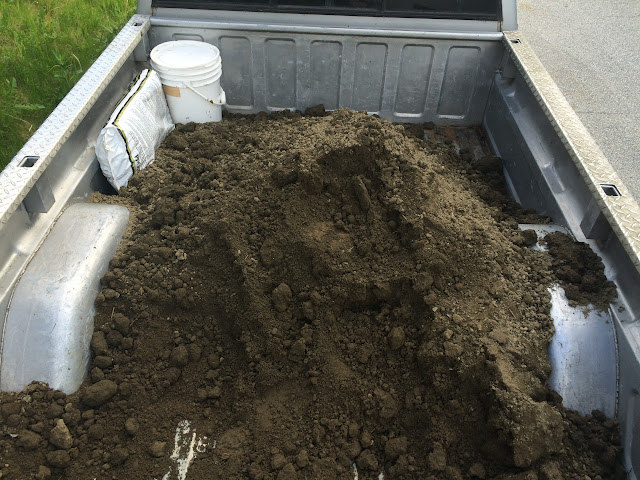 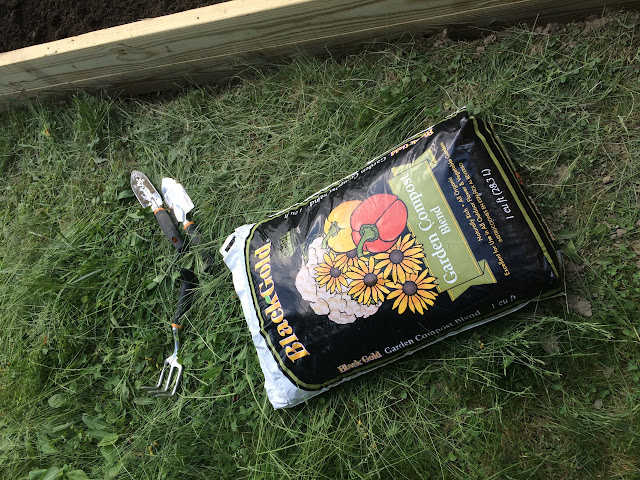 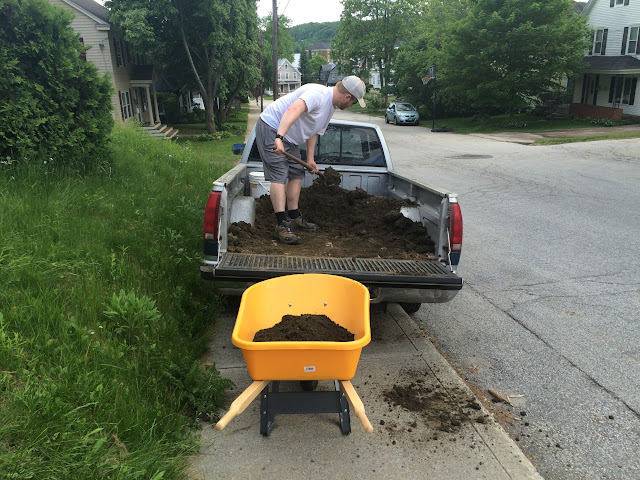 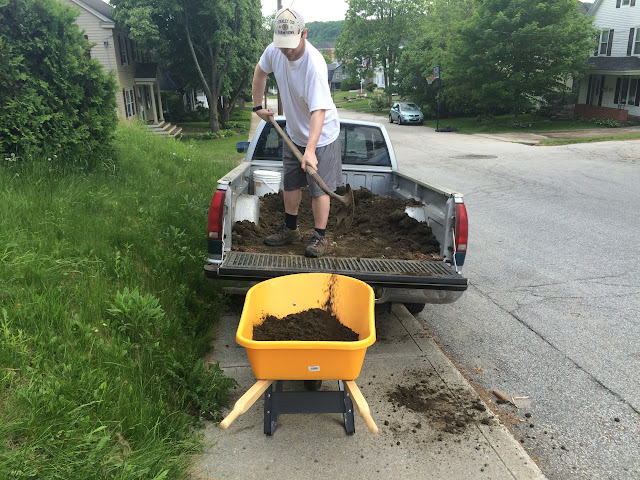 Step 3 was the WORST. The ACTUAL WORST. One cubic yard of topsoil, dumped into my truck at the garden yard, and then carted up the hill to fill the bed. 12 wheelbarrows full. I am no stranger to wheelbarrows, ok? No one who has a horse is. But filling and then unfilling that much solid dirt, not to mention getting it up that damn hill, over and over again? My blisters had blisters.

I mixed in 1 cubic foot of compost, but wish I'd done much more. I didn't do anything thoughtful or scientific with the soil. I just bought a bag of local, organic compost and mixed it into the topsoil as best I could. I wish I'd bought more. Maybe next year in preparation I'll get the soil tested and make some actual decisions about the compost I buy and how I mix it in. 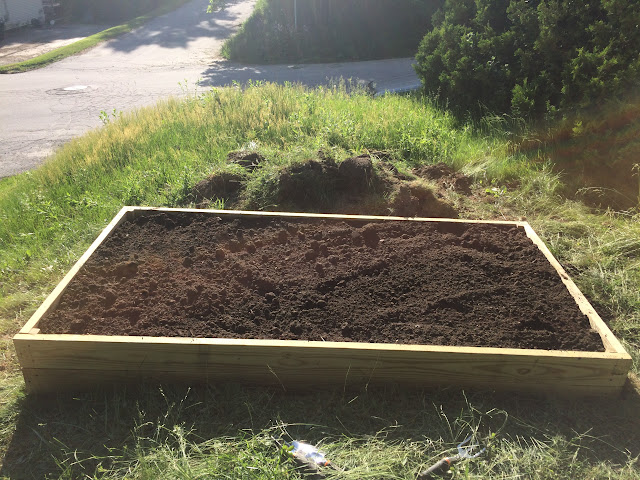 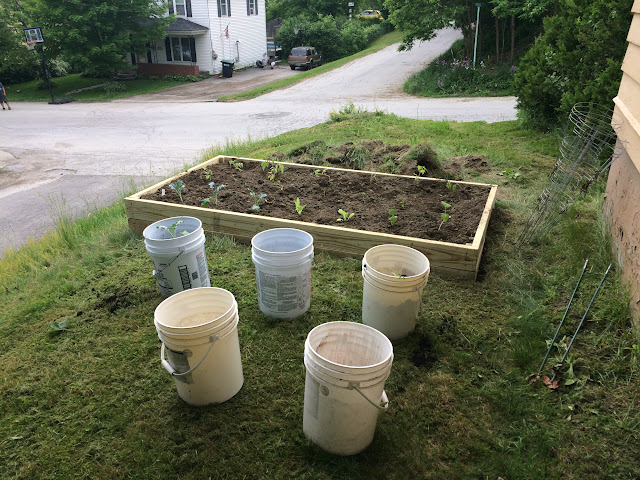 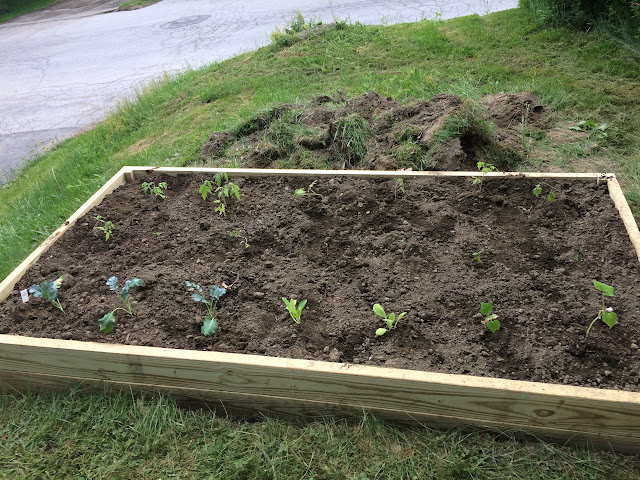 And final step! I had more seedlings than space in the bed, and I couldn't bear to ditch them, so I ended up adding in containers anyway. Oh well.

Total cost ran about $100 for everything including the seeds and other supplies. Not half bad, considering $75 of it was for the wood and the topsoil, and so will not need to be repeated in future years - and another $15 was the seeds themselves, of which I only used half, so they'll carry over to next year.

In the final tallying, I got tomatoes (three kinds), broccoli, cucumbers, zucchini, cabbage, sunflowers, and peppers.

After a frustrating hour or two, I discovered that nothing I could do made the faucet nearest to the bed work. I will have to call a plumber to troubleshoot what's wrong and that's not in the budgetary cards right now. So I ran our longest hose from another faucet on another part of the house, and spent a week or two watering by hand with the sprayer, and then bought a soaker hose and pinned it down between the plants. Now I just turn on the water for 15 minutes and then turn it off again and everything is thoroughly watered. I love it, especially since we've had such a dry summer. 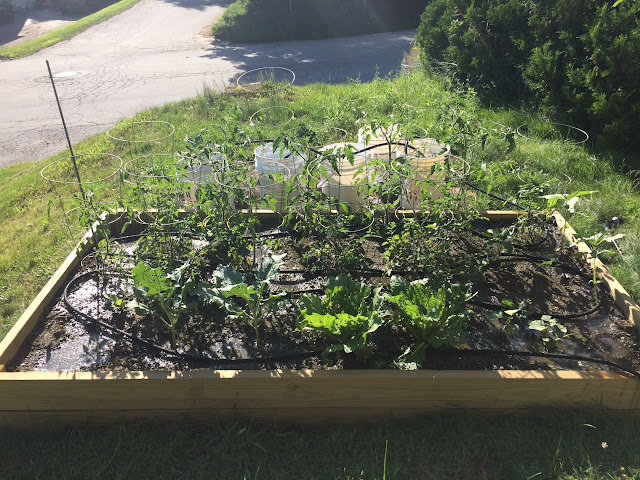 Here you can see a picture I took on Friday night, with the soaker system in action. The tomatoes are starting to bud like crazy. The cabbage has been absolutely destroyed by some kind of bug, which is not a terrible loss. I didn't intend to plant it - that's what was in the seed packets that I thought were broccoli. The broccoli is...doing ok. It's getting attacked by some kind of worm. I need to get netting for it to keep them away. I lost all the zucchini in transplant, and the peppers still aren't thriving, but after a tough few weeks the cucumbers and the sunflowers have pulled through very well.

I think we'll build a second raised bed next summer right next to this one and branch out a bit more in types of food grown - this has been really pretty easy and rewarding! Even the weeding has been minimal, I think because of a combination of location and of the brand new soil.