Yesterday, Sunday, Tris got a massage. He was tight in some of the expected places: in a muscle that runs from his poll down to his right front, in his back from his colicky episode, and in his hind end from the funny movement in his boots and the hill work. All surface tightness - no adhesions or strains.

Then this morning the vet did a 5 week check on his foot. She was THRILLED with the way it has responded to the metronidazole, said it looked (and smelled!) terrific. We jogged him out on the hard dirt road and he has a teeeeensy bit of residual tenderness in the RF when turned on a hard circle, but totally understandable given that he still has exposed tissue there.

She was concerned about the deterioration of his soles, however, an in consult with the surgeon decided to leave the boots off when he is in his stall, put them on for turnout and handwalking only, which should start to dry them out and toughen him up. Surgeon also recommended treating with Wonderdust occasionally 1-2x a week to start toughening up the tissue.

Finally, he got two more vaccines - West Nile and Potomac Horse Fever - and then had his teeth floated. He did really well for that and the vet let me feel around in his mouth to feel the sharp edges and what they felt like once he had them floated down. It was really, really neat! 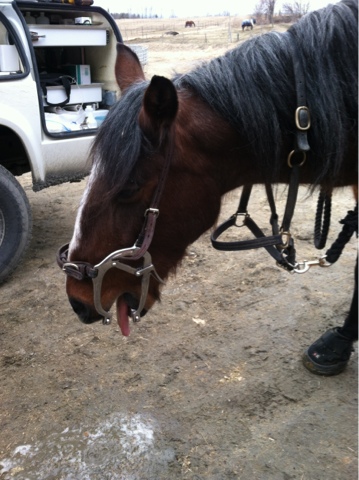