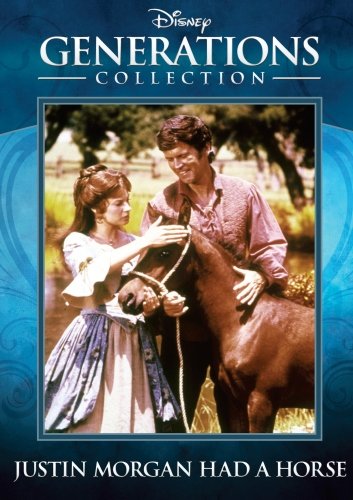 Justin Morgan Had a Horse (1972)
(Available to watch instantly on Amazon and iTunes, or to buy on DVD on Amazon)

Let me be very explicitly up front and very clear before I delve into a review: this movie has little to nothing to do with either the actual historical events surrounding Justin Morgan and his horse Figure OR with the Marguerite Henry book of the same name.

If you want the historical review of the movie, I'll be posting one on Figuring History in the next few days, so keep an eye there.

In the meantime, let's do the horse-centric review of the movie. To that end, let me summarize the plot.

Justin Morgan is a schoolteacher and musician who travels to Massachusetts to settle a debt owed to him by his cousin. Said cousin died penniless, and the only things Justin receives are two horses and a cart. The younger of the horses is a small animal that Justin has named Figure.

The voiceover tells us that Justin Morgan Has a Dream: he wants to do something that will live on after him, something that really means something. Simultaneously, he wants to show the world a new way to train a horse. (Though at no point is there any explanation whatsoever of how his way of training a horse is different from any other way of training a horse, though at one point someone mentions that Justin wants to create an "all-around" horse that will do many different things...which is apparently a novel idea?) 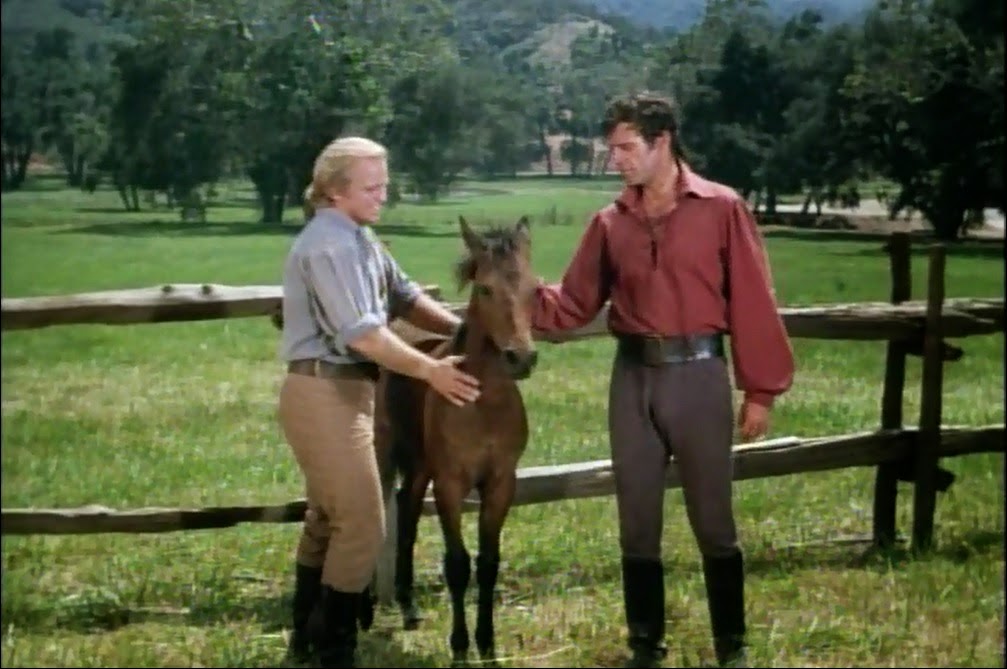 Justin goes deep into debt to raise and train Figure, which is a problem because as a schoolteacher he doesn't make much money to begin with. He borrows that money from Squire Fiske, who is a rich farmer and horse breeder who looks down on Figure and thinks he'll never amount to anything. Justin also happens to be in love with Kathleen, who is an indentured servant who owes Squire Fiske five more years of work. Thus, the central tension of the movie is basically a love triangle between Justin, Kathleen, and Figure. 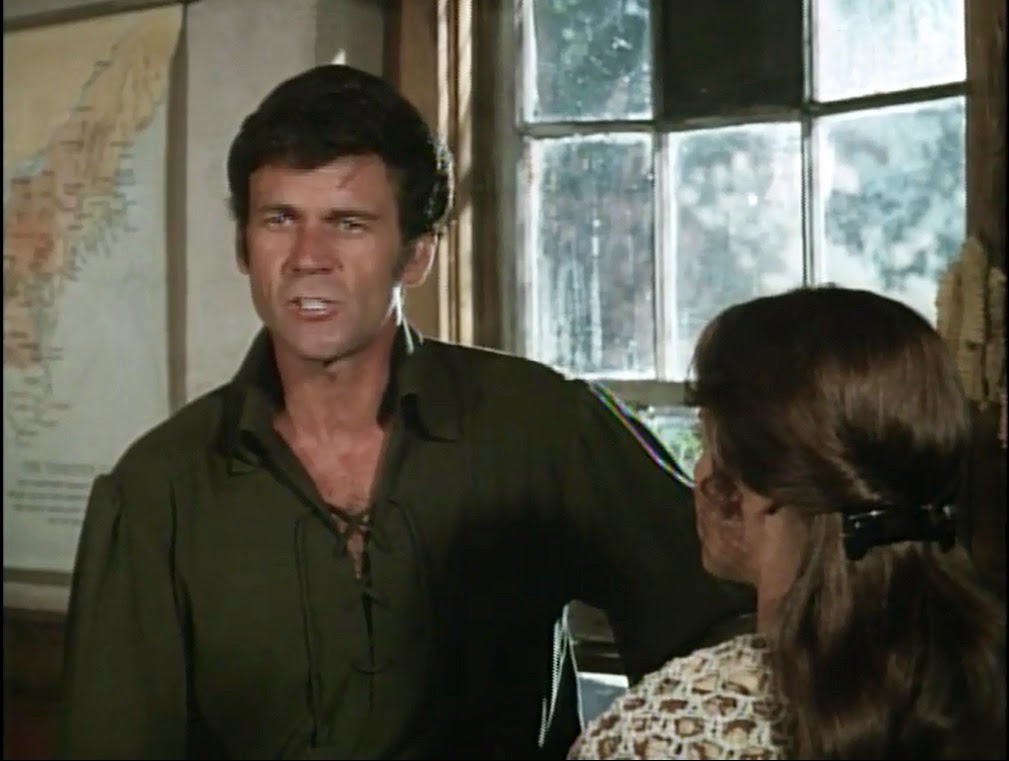 (Please note that the character of Kathleen is entirely invented for the movie, and Joel Goss, Marguerite Henry's boy narrator, never appears.) 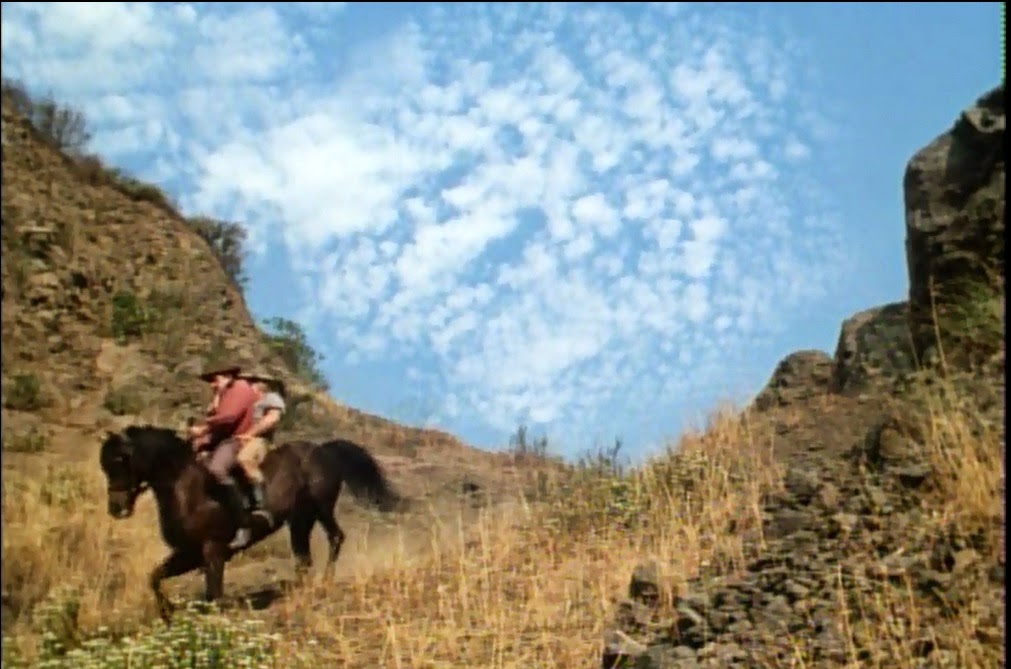 Things finally come to a head, and Squire Fiske demands Figure in payment for Justin Morgan's debts. Justin sulks and decides to leave town, but then Fiske receives a challenge to race Figure against two New York horses. Justin agrees to stay and train Figure for the big race. If he wins, he gets Fiske to agree to let Kathleen out of the rest of her contract so they can get married.

The big race happens, and Figure wins! Surprise! Not only that, but Squire Fiske is so moved by Figure's devotion to Justin that he agrees to give the horse back to Justin in addition to letting Kathleen out of her contract. The epilogue scene of the movie shows that Justin, Kathleen, and Squire Fiske have all joined forces to create a new breed of horse.

So that's the summary. What about from a horse point of view?

Here's the central problem with this movie. It's not about the horse. It's about Justin. Justin's dreams, Justin's problems, and Justin's decisions. The movie even waffles back and forth on what exactly makes Figure so special. Is he just a miracle wonder horse who was born great, and Justin got lucky? Does Justin get credit for recognizing the diamond in the rough and polishing it up? Or could Justin have created a wonder horse out of any old horse he found by the roadside, and the fact that Figure was such a scrawny little thing is only more of a testament to Justin's skills as a horseman? Different lines of dialogue and scene setups all imply different things, and the movie has no central statement. Played well, that could be a subtle mystery; in this movie, it just comes across as sloppy. 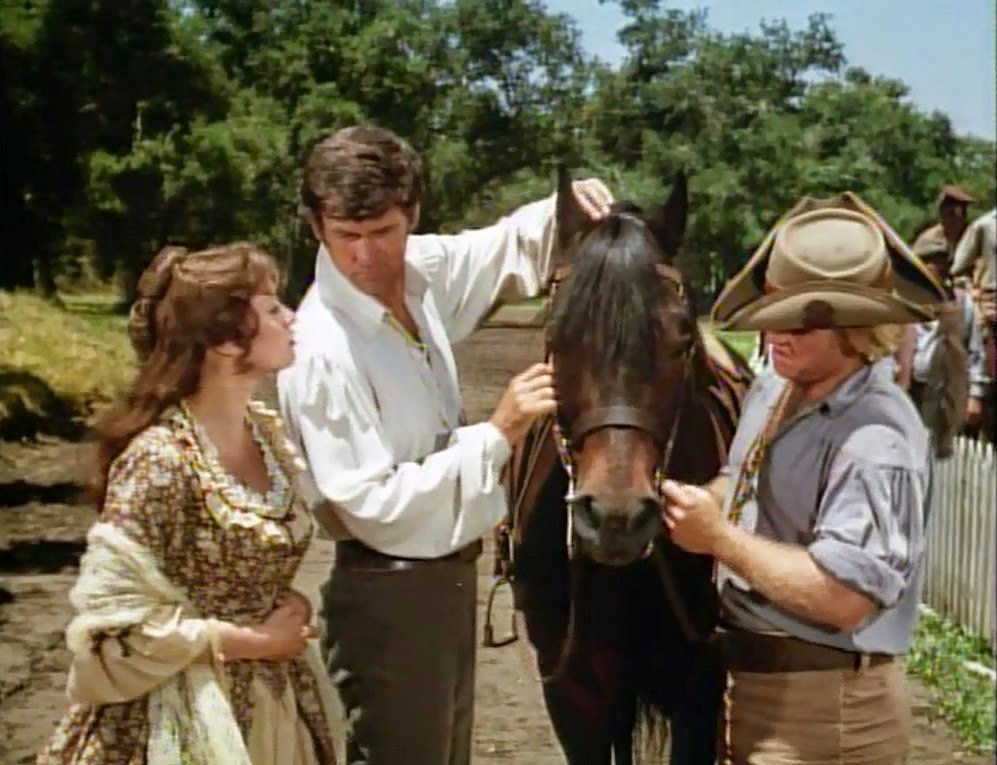 With that in mind, a lot of other things are kind of weird. The way the horse is used in defiance of common sense. (That quarry scene comes to mind, holy crap.) For example, the log-pulling scene, which is a pivotal part of Figure's legend and Marguerite Henry's book, has been changed from a simple show of strength on Figure's part to a show of cleverness on Justin's - who has men sit on it so the front is lifted off the ground, and who has Figure move to unstick the log before pulling it.

Figure's pivotal race is also played up as Justin's cleverness. Figure is training well, but they need to make him faster, so Justin suggests that Robert Evans get up out of the saddle in a jockey crouch to stay off his back. (Duh?) He forges special ultra-light shoes himself. He trains the horse in all weather to be a stoic runner.

The really emotional moments of the movie are all centered on Justin, with Figure occasionally as a feature of those moments, but it's not about him. It's about Justin doubting himself, wanting to make a name for himself, trying to overcome odds. Justin doesn't so much believe in Figure as he believes in himself and the way he's trained Figure. Losing Figure is just one more setback in his life. He sulks a lot, but he's not truly devastated.

Training scenes are a bit bizarre. There's a training montage during which Justin longes Figure from yearling colt on up to two year old...and the horse improves not at all. He's a brat on the longe line through the whole montage. He just gets bigger and older. That big race that's the climax of the movie, that Justin trains Figure for? They have a week to train him. A. Week. Granted, the horse is fit already, but...really? 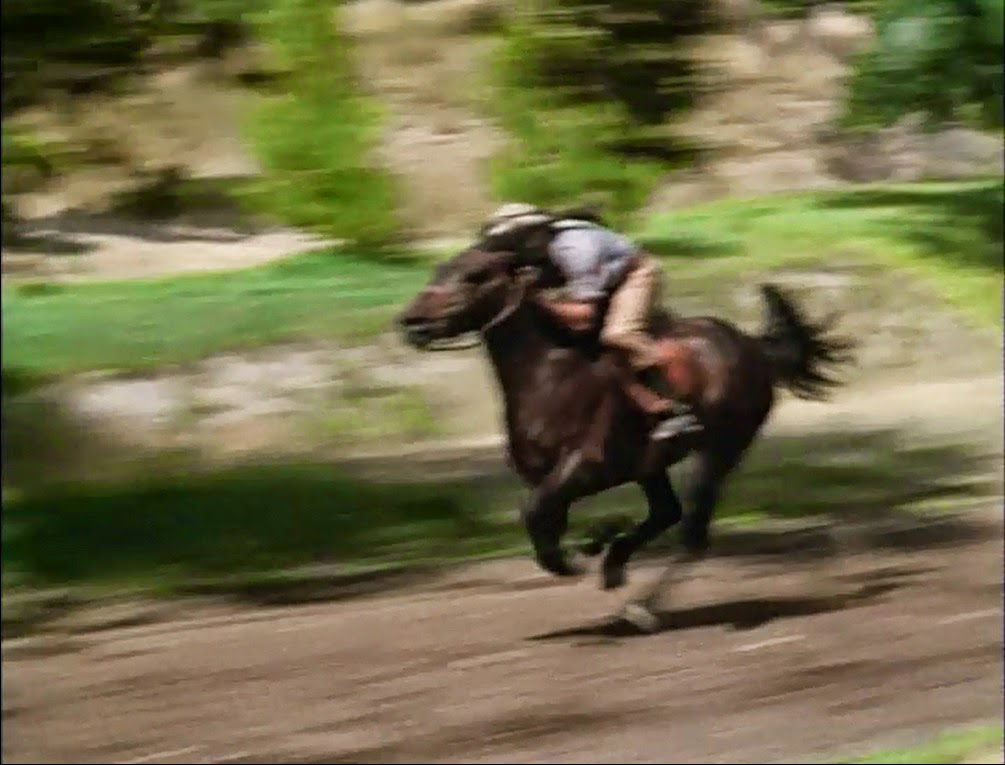 There's zero attempt to make tack even vaguely period - I'm pretty sure half the horses are just ridden in off-the-rack 1970s hunt saddles and flat bridles. The riding is piss-poor and there are some super-awkward scenes during the race when they try to get close-ups for tension. Buying oats for Figure is a central piece of Justin's debt to Squire Fiske, when the horse is on lush pasture 24/7. 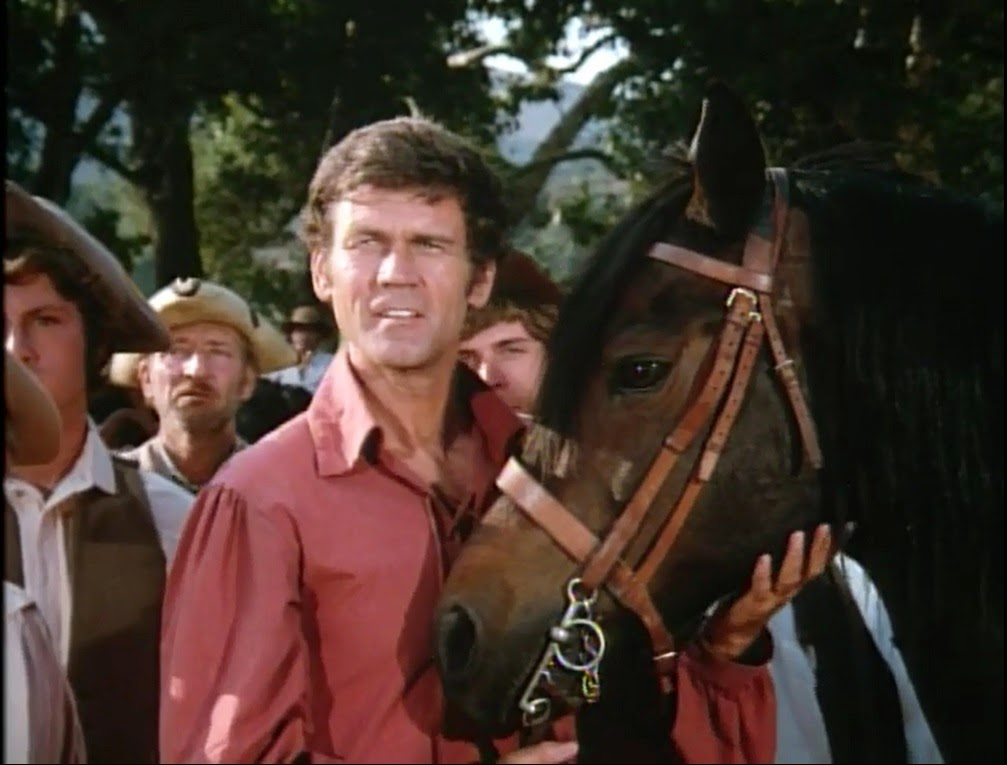 That said, there's one thing they got very, very right. The horse they use for close-ups of Figure is a GORGEOUS example of a throwback, foundation Morgan. Just lovely. Many of the scenes with him really show that off. As best as I can tell, they use the same horse pretty much right through. Some of the action scenes it seems like they swapped in another random bay, but otherwise it's that same beautiful Morgan.

In final summation, this wasn't a terrible movie. It was perfectly engaging to watch, and at 91 minutes, relatively short. If you turn off the part of your brain that might know anything about history or Marguerite Henry's book, you'll probably enjoy it a fair bit. It doesn't have any glaring flaws, nor any glaring strengths. It's a perfectly enjoyable, somewhat bland little film.
at 10:00 AM