Though last night was to be my first night off from wrapping, I rewrapped anyway, because I was worried about him having stood in his dirty stall.

He had a little but of blood and discharge, more than I wanted, but not enough to go through the small square of gauze that was in the hole itself. The hole also smelled a bit funkier than I would have liked. I'll keep a close eye - he's still walking fine and in good spirits - but I can't help but feel it's a bit of a setback.

I think when they told me 6-8 weeks of recovery I was mostly excited about how short that was, how I'd be back to riding in May, possibly. I didn't think how long that was if you're worried practically every second of every day.

I took a picture of the gauze from his foot in the interests of disclosure; if you're at all squeamish, don't scroll down. 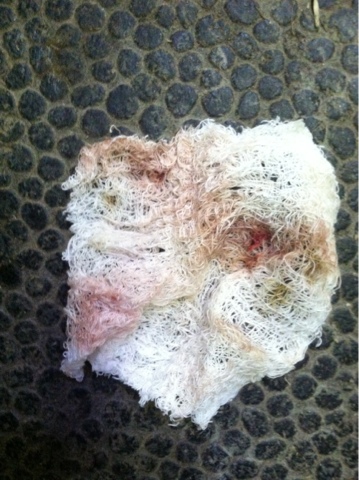