Miracle of the White Stallion (1963)
(available on DVD at Amazon.com) 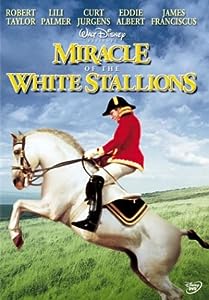 In my world, there are only two perfect horse movies. I'll talk about the other one soon, but one is Disney's 1963 movie Miracle of the White Stallions, starring Robert Taylor as Colonel Alois Podhajsky.

Miracle tells the story of a very fraught period in the history of the Spanish Riding School: 1945, when the school was under Nazi reign and in a Vienna that was in constant danger. Podhajsky - arguably the school's greatest director, and one of the great dressage riders of the 20th century and perhaps of all time - persevered to save not only the school and its stallions, but also the mares and foals from the stud farm in Piber. It's based on Podhajsky's memoir My Dancing White Horses, which has been out of print for many, many years and which I would dearly love to read someday.

Make no mistake: this is a movie of its time. There are precisely two mentions of concentration camps; both are fleeting and neither acknowledges the Holocaust. There are Evil Nazis and there are Good Men Who Happen to Be Nazis. There are gosh-darn American GIs, the pacing is not the greatest, and let's not even talk about the gender politics, though the movie does actually pass the Bechdel Test and arguably Podhajsky's wife Vedena gets some of the film's best lines.

Disney pulled out all the stops on this movie. It was filmed on location, using the actual SRS stallions and riders. Alois Podhajsky was Robert Taylor's stunt double. There are long segments that watch more like one of those old Disney nature documentaries than a feature film - long, sweeping, gorgeous shots of herds of beautiful horses, pleasant historical narration, and minimal plot for chunks.

It seems like someone involved with this movie also realized they were filming history in action: there are extended sequences of training and performance with the SRS stallions and riders, multiple examples of the Airs Above Ground, long, loving, sweeping views of the quadrilles. Transitions are flawless, and the concentration of the stallions is fierce and comes right through the screen. The movie, intended as a commercial success, has become a historic artifact.

I can't be alone in my childhood obsession with this movie in particular and the Spanish Riding School in general. I rented and watched the VHS more times than could possible be counted, and when I wasn't watching the movie I was re-reading Marguerite Henry's White Stallion of Lipizza (which I am delighted to see is back in print, Christmas list ahoy!). As an adult, Podhajsky's Complete Training of Horse and Rider is my guiding star, one of the few training books that I hold dear to my heart and always find inspiring.

In short: be very aware of this movie's shortcomings, but don't tell me about any of them. Absolute perfection.
at 12:00 PM