April 11 is a big day in our family, and yesterday was a milestone anniversary for both of the April 11 events. 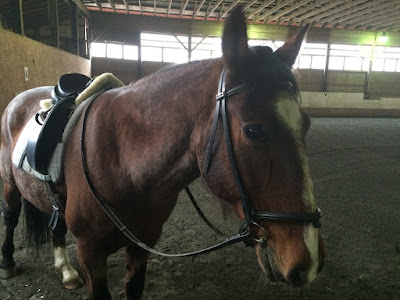 Realistically, I have no idea when his birthday is. Even his year of birth (1995, coded into his freezebrand) is a bit of a guess, since he was rounded up at age 4. It's a pretty darn good guess, but it could be wrong one way or the other.

So, when I got him, I decided to pick a day for him. April 11 was my much-beloved grandmother's birthday. She passed away from a very fast, very aggressive form of lung cancer six months before I got Tristan. (Actually, very close to her own birthday.) So it was a good way for me to think about her on the date. Yesterday would've been her 90th birthday, and she's been gone for 11 years. I miss her a lot.

I went back and forth on whether to feed Tristan a beer. I ended up not doing it. I might on Friday night. We have a strict no weekday drinking rule in our household, and between a) laziness, b) neurotic doubt and c) that rule, I decided no beer last night.

I ended up doing a short, 25 minute dressage school. He gave me some lovely stuff in that short time, including a couple of trot-canter transitions in which he really lifted through the withers, and some gorgeous big expressive stretchy trot at the very end.

I groomed him hard before and after the ride, and got a TON of hair out of him. I offered him a slice of the maple pound cake I'd made and brought to the barn, but he wanted none of it - pretty typical for him. He's not a baked goods kind of horse, alas. 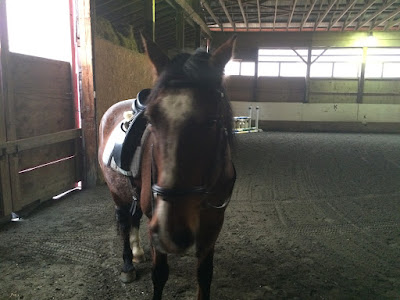 um, stop taking pictures of me and get on with it already

But! Yesterday was also an anniversary of a slightly less happy kind. Five years ago yesterday, I had colic surgery.

Yes, you read that right. I did. Not Tristan.

See, five years + one day ago, I went to bed not feeling great, but not that awful - just sort of nauseated and unsettled. I woke up at 2am in the worst pain I'd experienced in my life - and I'm really good with pain. I literally crawled to the bathroom and tried to throw up, failed at that, called my mother (she's a nurse) and decided with her and my husband (boyfriend at the time) that I needed to go to the ER.

Thus began a very long day that ended at 2pm with me being wheeled into surgery, entirely unsure what they would be doing. It presented like appendicitis, but my appendix looked ok (not great, but not ready to burst either) on the CT scan, the pain was not any better (they did not give me drugs until noon, so that they could establish that I was not drug-seeking, which I get, but wow, it sucked), and so I signed a waiver on the understanding that they would be doing exploratory abdominal surgery and would remove some part of my inside - definitely my appendix, because why not, but also possibly an ovary (also looking a little dodgy but not definitively so), spleen, pancreas, who the hell knew?

I woke up a few hours later and heard the verdict. Somehow, an adhesion - which is a piece of internal scar tissue - had displaced and had wrapped around and tied off a loop of my small intestine. The pain I felt was from my entire digestive system slowly shutting down. If it had gone too much longer there was a distinct possibility that the tied off piece of my intestine could have died or become infected. It was basically one of the weirdest possible things it could've been based on my symptoms. The surgeon took a photo of my intestines with his phone during surgery and I made grand rounds that week, since it was a teaching hospital.

I ended up in the hospital for two days, and at home flat on my back for another two weeks, and recovering for the rest of the spring. At a post-op appointment the surgeon was carefully explaining to me that they'd chose to go in laparoscopically for the best outcomes, and that was great news, since if I was careful the scars would be minimal and I could wear a bikini again, probably!

I sighed, looked at him, and said very calmly but firmly, "I have never worn a bikini in my life. When can I ride my horse again?"

I swear, the surgeon's whole face lit up, he looked like he wanted to high five me, and we got on famously. I recovered pretty darn well, and never even filled the prescription he gave me (for 30 days of opiates, ah, those halcyon days before drug addiction was a white people problem and so we didn't really care about it). It did set me back in riding for that spring since I had no abs and jiggling around was painful, but for a life-threatening issue that could only be solved by surgery, it was pretty darn quick and straightforward!

It took me a while to realize that what had happened to me was exactly what happens to a number of horses who colic and have to have surgery. Since then I've had more sympathy for the pain horses are in when they colic!
at 12:01 PM